Looking back at the photos I took at Easter at the beginning of the month, it’s very hard to believe that it really is only 4 weeks ago.

I was supposed to go to Syria for a holiday for 12 days at the beginning of the month; I am so happy that it was cancelled as I would have missed one of the most beautiful months in my garden.  Note for next year – Stay at home during April!

Tulips were the stars of the month; fringed Burgundy Lace looked perfect from when they first opened until the middle of last week. I have already been looking at which tulips I’ll plant this autumn and where it will be possible to put them.  As the white tulips and the alliums in the formal beds at the front of the house flowered for a second year I will plant the other two beds in the same way.

The wisteria on the pillars around the terrace filled the air with their perfume, my peony flowered for the first time, the hedge of Rosa mutabilis which divides the drive from the vegetable garden, which I only planted last autumn are already full of flower and Rosa Conrad F Meyer already had 11 flowers fully open and more fat buds before the end of April thereby proving the RHS rose book accurate in saying that it is a very early rose.

Teucrium began flowering in mid-February and is still in full flower, attracting bees and butterflies and creating an airy blue-silver haze of colour.

A very subdued planting under the mulberry of various Hosta, Solomon’s seal and Acanthus combined with wine–red Heuchera give a very pleasing restful place to sit and contemplate the garden.  Viburnum mariessii directly under the mulberry will flower soon. 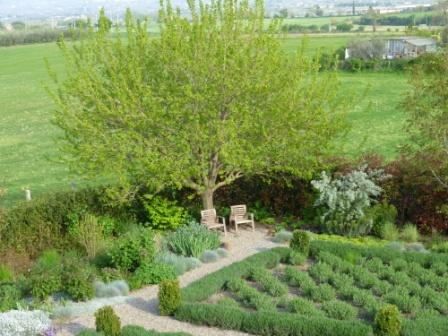 Festuca glauca in the foreground with Hosta, Euphorbia and Heuchera near the Mulberry tree

Jobs that need to be done:  I must finish rearranging the irrigation in the back bed.  This is, I think, the least successful part of the garden probably because it is shaded by 2 walnut trees and the soil is very thin here; last year the most successful plant was an orange tall Hemerocallis that flowered for ages.  Maybe I need some more Hosta under the walnuts in the spaces to cover the ground.  My intended colour scheme is based on an Abutilon pictum that has burnt orange flowers that I wanted to combine with purple foliage plants.  There are Heuchera and a form of either Lysimachia or Lychnis that has purple leaves and vibrant yellow flowers, (I’m not sure what this plant is because it was a gift from a friend).

Stipa tenuissa has seeded all over the garden so I want to make good use of it by mass planting a steep bank with it, interspersing it with swathes flowering plants, creating a kind of wild meadow.  This particular Stipa is such good value being evergreen and fresh looking throughout the winter and moving beautifully in the breeze (read strong wind in this garden).

I don’t think I’ve mentioned the French lavender, yet it too has been flowering all month.

I read, that in France, they call it English Lavender!

At the end of the month Gladiolus byzantinus , Ceonothus repans, Alliums and Irises are all flowering, and then in May I am looking forward to all the roses, the banksia is already fully in flower.

In the vegetable garden, everything is growing well; the sweetcorn seed I sowed last weekend has germinated and will probably need planting out next week.