Realistically I have done very little in the garden this month.  I did prune all the Wisteria on the pillars around the terrace and also the roses there too.  The vegetable garden is tidy and waiting for better weather to plant the onions I bought (I’m hoping they haven’t dried out since I bought them.  I may have already mentioned that the garlic I planted at the beginning of the month are all shooting but all have pushed up out of the soil just as the book said they would if they were planted at the new moon (and that was exactly when I planted them).  Note to self – check the book before you plant rather than just after!  I hope it won’t make too much difference to them.  A winter crop I’ve been thrilled with is Broccoli – The first main heads were excellent but what has surprised me is that they have continued to produce secondary and 3rd, 4th and I think even 5th heads, I will plant even more next year as they are one of my favourite vegetables and also make a great sauce for pasta and delicious risotto.

My exciting news is that I’ve decided to buy a greenhouse (known as a serra in Italian.  Because gardening is not the hobby here as it is in the UK it has not been easy to find information about greenhouses at all and even more difficult to actually see one before committing to buying!  On Saturday I saw a display model and was impressed with the quality.  I think they are more expensive here because so few are sold but I’m looking forward now to ordering and having this useful addition to the garden.  My main use will be to over winter Lemon plants (I don’t have them yet) that I want for the terrace – the perfume of lemon flowers and the joy of picking my own lemons will be wonderful.  I will also look for some limes as they are difficult to buy here and essential when cooking Thai curries. I also want to extend the season for peppers and aubergines and maybe tomatoes.  It will also give me the opportunity to grow some plants from seed – for varieties that I can’t buy as plug plants.  Again another ingredient of Thai recipes Holy Basil is one of the plants I’d like to grow and maybe Lemon grass too.

I’d also like to experiment some different flowers for cutting – but I’ll have to be patient and see what the possibilities are.

At present I don’t grow Pelargoniums but they are something that would flower in mid-summer when most other things are in summer dormancy because of the heat.  In reality I don’t need a greenhouse for this as everyone here usually just puts the plants in a dry place, a garage or cellar, and leaves them until spring when though the plants normally look rather sad will shoot and many cuttings can be taken to produce new plants and the ‘mother’ plant can be coaxed back to healthy growth with some food and water!  I only have somewhere that is too damp so the plants would rot off, so that’s my reason for not growing them now.

The extreme cold we had in December (minus 7 at least) may have killed the Agapanthus I have planted in the left hand border.  I like the Agapanthus a lot so when I get the greenhouse I can plant some up in pots then over winter them safely.  I’m going to have to decide whether I want to maintain it frost free – I will be re-reading Janet’s (at Plantalicious) comments on this subject.  I don’t want to heat it unless we put up a solar panel which may be a good option as there is always lots of sun even when it is cold.

As always thanks to Helen at Patient Gardener for hosting the End of Month review.

I will be returning to the ‘slope’ but nothing has changed since planting in October and November.  As there are no obvious other new areas I’ll try to give you more details about the existing beds and borders.  Sorry no photos either today.

A belated very Happy New Year to everyone!  I hope 2011 will bring all gardeners just what they need in terms of flower display and vegetable production.

I’ve been unable to post as I computer stopped working almost immediately we returned in the New Year.  Then as usual with a new computer I’ve had issues with various programs not working – most importantly my ability to upload photos to the computer just hasn’t worked.  Today I have managed to upload some photos I took for bloomday but it has to be said that the ‘progress’ of the new system meant it took about 3 times as long as normal.

We had an amazing beginning to January, with temperatures as high as the mid 20s Centigrade (last weekend I was able to work outside all day and was actually felt too hot for some of the time.  It was also hot enough to eat lunch outside on Sunday and I had to wear sunglasses all day!  It has been a real bonus to have about 10 days of perfect gardening weather- I finished planting all the bulbs, except for some Regal Lilly I bought to go in pots.  My great achievement was to prune the Wisteria on the pergola around the house.  It was important to get the structure growing strongly so that we will have shade all around the house in summer.  Now I am waiting excitedly to see how well it will flower this spring.

Prostrate Rosemary is full of flower

In the vegetable garden I’ve managed to clear all the beds of last year’s crops and plant garlic and shallots.  After I’d planted the garlic I read that it shouldn’t be planted at the new moon and it was exactly the new moon that day!  The book said that they would all push up…… and that’s what they have done though they are shooting so all may not be lost.  I keep pushing them back down but they just pop up again. 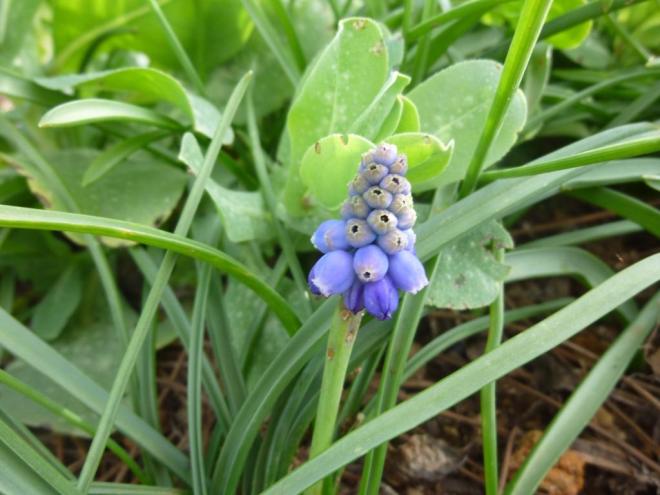 A few more Muscari are flowering

After our glorious sunny days the weather has now returned to winter with some snow falling on Friday and Saturday – not very much actually here but the hills we can see from the house ae still covered with a sprinkling of snow.  The temperatures are hovering around zero and the wind is blowing from the NE (Greciale) I think this is the coldest wind we have though the locals all think the Tramontana (from the north) is the coldest. 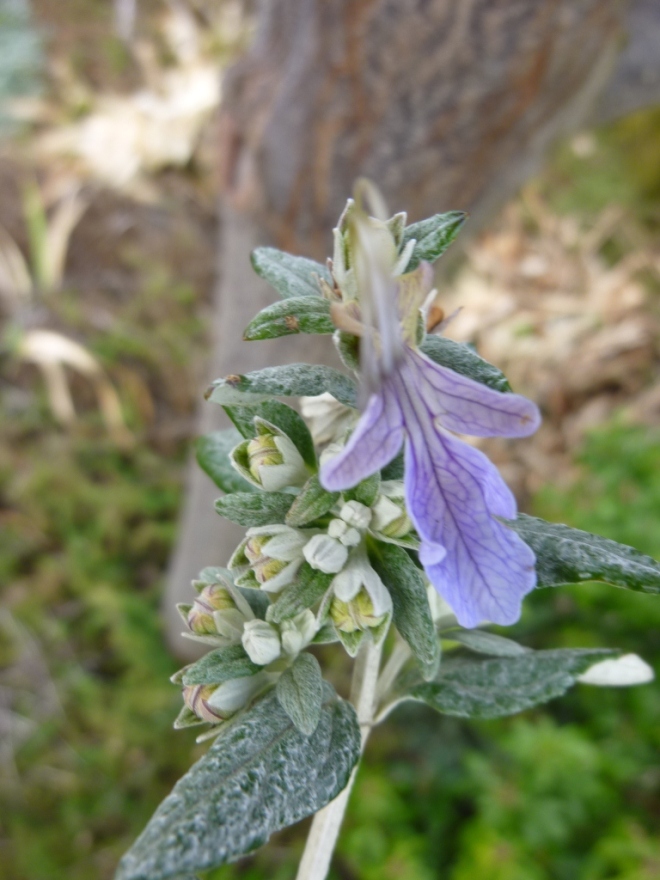 All the Teucrium are flowering - they are such reliable plants 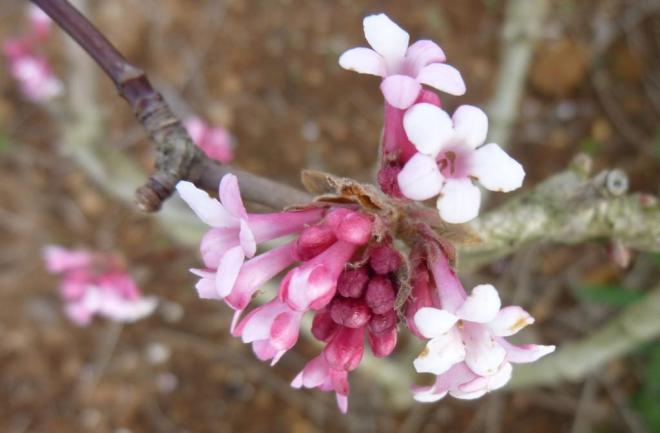 All these plants were flowering on 15th January and most will hopefully continue even with the return of the cold weather, I’ve seen tulip and daffodil shoots which fill me anticipation; and new green shoots on the Box cubes in the formal garden at the front of the house. 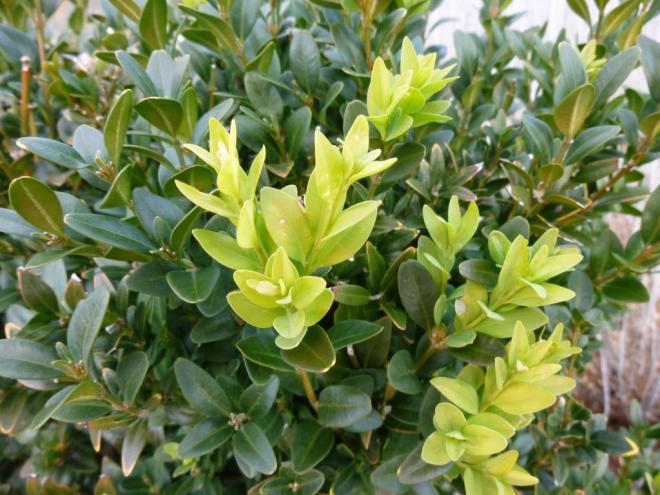 Amazing difference in colour of the new growth on the Box

Brave Arabis, that I grew from seed, cover the ground under the Pomegranate 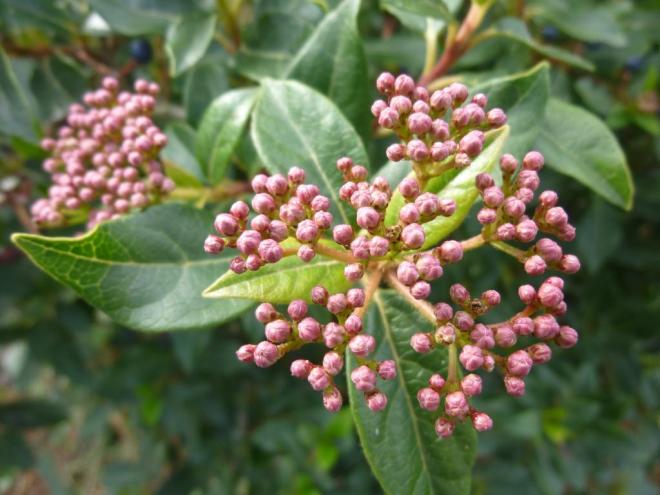 Buds on Viburnum tinus about to open

Viburnum tinus is a plant that just doesn’t grow as well here as it does in the UK.  The flowers don’t open until February or March and then when the flowers finish the shrub looks like its dying for a month or so until the new growth takes over.

Thr plant I am enjoying the most in the garden this month is Nandino – it has beautiful pink tinged foliage and red berries.