Another perfect day for gardening, I really can’t believe how lovely it is and for how long it has lasted!

It isn’t so perfect for the plants as every morning this week there has been a frost in the gardens and in the fields all around, then by about 10 in the morning the temperature has risen to about 18°C.  It feels even warmer than this in the sun.  Today, however I haven’t been gardening exactly, I’ve been moving the huge heap that has built up over the last 3 years with all the weeds that have been removed from the borders including the roots of the dreaded ‘graminia’ (a type of couch grass but with roots as long a bind weed).  There are also prunings of all kinds of things.  I’m trying to sort out the good compost that will be so useful on the vegetable beds; the prunings that could be shredded and used mulch.  Unfortunately there are also lots of LIVE roots of the graminia, these I intend burning and at least the ash can go onto the new compost heap.  It is back breaking work and though it is lovely being outside, my back wishes I was doing something else. 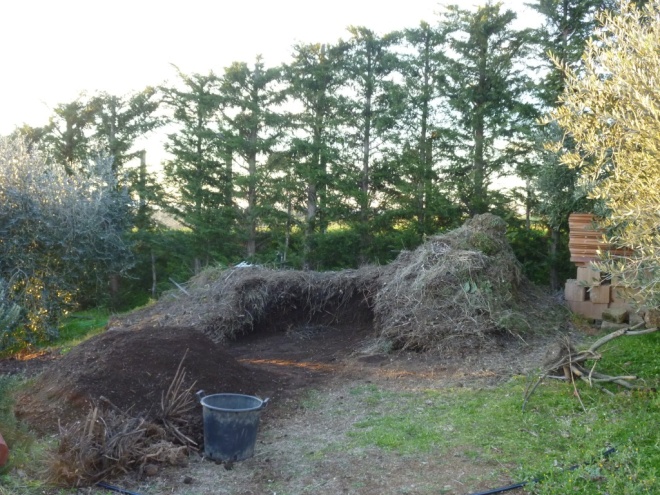 Here you can see the mountain I must move (actually I took this photo on the 5th so the heap is a little smaller now though not as much as I would like!)  Behind the heap are Leylandii on the boundary – I hate them but they do a reasonable job as a windbreak, though they are rather thin as they hadn’t been pruned at all before we moved in and so they were pruned rather drastically last year.  I may take the tops off as I don’t think they need to be quite so tall just here.  Interestingly they shoot from old wood  here in Italy which they rarely do in the UK I imagine it must be something to do with light levels!  We need to construct foundations so there’s lots more shifting and digging to do before the greenhouse can be constructed.

4 thoughts on “Preparing for the greenhouse”