The weather has been pleasantly warm for most of November so far; the central heating has not been switched on and the fire we light in the evenings is more for the pleasure of looking at it than the heat that it produces.  September, October and early November has been perfect for the garden, the warm sunshine plus a good amount of rain.  There have been very sunny days and very rainy days so easy to decide what to do and to be able to enjoy the good days and be grateful for the rain when it comes.

Rain was forecast for last Sunday so I thought it would be perfect to have a lunch party for my gardening friends as none of us would want to be outside!  Often when I make plans like this, things go awry; the sun shines hotly down making everyone wish they were working in the garden rather than eating!  Last Sunday the forecast proved only too accurate!  It began raining during the night and continued heavily for most of the morning; about an hour before our guests were due to arrive we thought it might be a good idea to check the state of the lane to the house.  Last year when there was torrential rain the lane was covered by about 30 cm of topsoil from the neighbouring field.

So had the farmer learnt from last year’s disaster?  Had he decided to plough and plant seed early so that the precious topsoil wouldn’t be washed away?  NO! HE HADN’T!

So with only a short time before four cars would be arriving we found the lane in front of our gates with a thick layer of MUD and worse still the ditch into which our grey water drains completely filled with mud for a distance of about 100 metres.

This should be a ditch about a metre and a half deep, now almost level with the lane, the block of stone was washed here from about 50 metres away 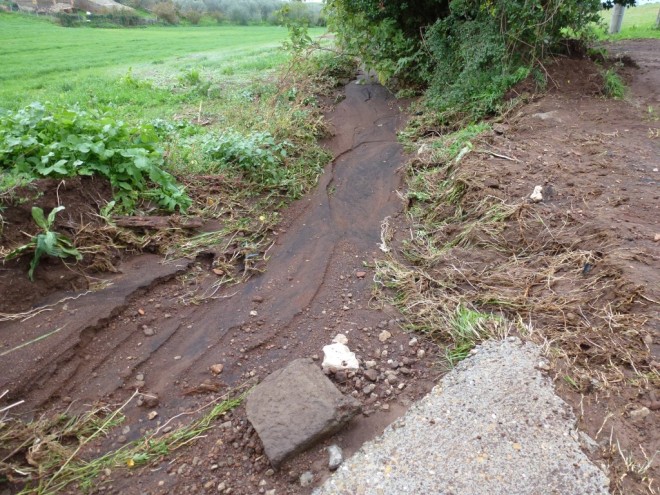 Top soil filled ditch, it is full for at least 100 metres

But I’m not complaining (well not much anyway).  People lost their lives due to the torrential rain; a car disappeared into a chasm created when a bridge collapsed; the three occupants of the car died of asphyxiation deep within the mud in Tuscany (not so very far north of us).  People have lost their homes and everything in them; it is not so common here as in the UK to have home insurance so this is truly a disaster.

We were extremely lucky, the shepherd came with his tractor and flattened out the mud and our guests were able to drive through with no problems, thank you Amadeo!

Water is such a powerful element, Global climate change means that many places in countries all over the world will suffer severe flooding on a regular basis.  We must all try to encourage our governments to reduce the causes of global climate change rather than them begging for help to deal with its results.