I mentioned last autumn that I was extending and changing the planting in the back border to create a spring walk.  I was also toying with the idea of adding a pleached hedge of Lime (Tilia) or Hornbeam (Carpinus betulus).  I’m still thinking about this as maybe a pleached hedge would block out a lot of the sky from my kitchen window (not so good); it would also obscure the view of the nearest house (good).

The back border was originally hurriedly planted in spring of 2008.

I planted Verbena bonariensis everywhere when I was beginning the garden

Looking towards the Mulberry, October 2008.  The lemon verbena has been moved

I didn’t prepare this bed well so I added a weed suppressant membrane. and planted the following:

There were 4 walnut trees planted equidistantly along the border; in the left corner (looking from the house) is a large white mulberry; the boundary is planted with Photinia. In line with the main door to the house there is a large closely pruned block of Bay about 2.5 m high.  I want to put a feature in front of the Bay either a bench seat although I don’t think it is a natural stopping and sitting point or perhaps some type of sculpture.  At present there is a carved stone head of an Etruscan woman that a good friend carved for us; but she isn’t large enough for this situation. 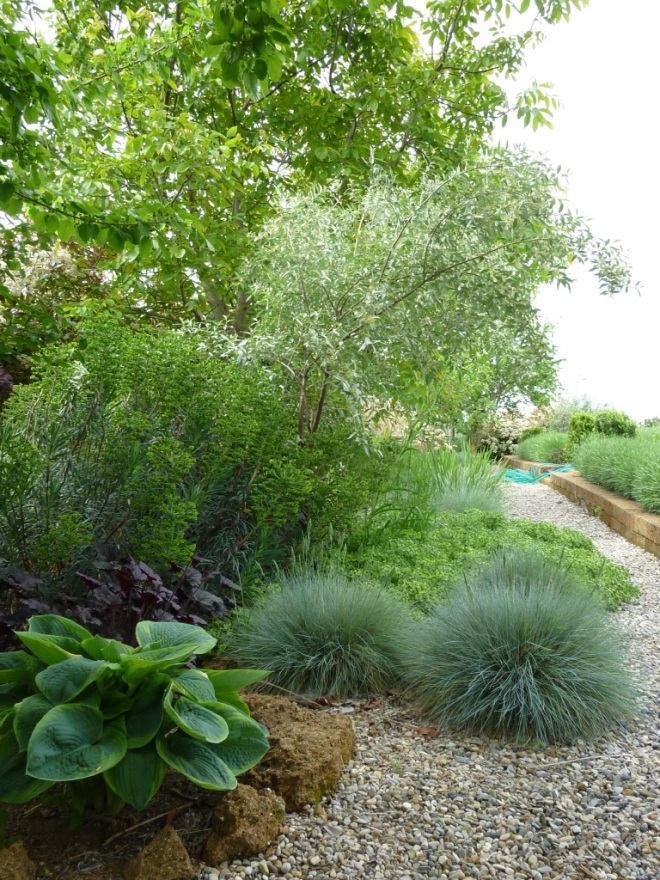 Two of the walnuts have been removed leaving more space for the two remaining; I don’t get a good crop of walnuts from these trees as they aren’t really suited to the ground.  The Back border continues now as far as the plum tree you saw a couple of weeks ago here.

In the first year I planted a Cotinus coggygria purple, Viburnum burwoodii, Calamagrotstis x acutifolia ‘Karl Foerster’, Rosa ‘Old Blush’ and R. ‘Sally Holmes’.  In subsequent years the following were added: An orange Abutilon which for a time set the colour theme of the border to orange; however the Abutilon isn’t 100% hardy and has twice been killed to ground level by cold winters so is not a reliable to be the anchor point of the border.   Agapanthus Ink spot, Epilobium canum ‘Western Hills’, Hemerocallis orange tall (these thrive and are spreading well) Hemerocallis Mauna Loa (also orange with a darker throat also thriving) Rosa ‘Rush’ (doesn’t fit in the border at all well and needs to be moved but I’m not sure where to).  Sisyrinchium striatum is very happy here and seeds around in a pleasing way.

There are lots of Euphorbia myrsinites;  Acanthus mollis grows in the corner under the Mulberry spreading happily but easily removed if the seedlings are spotted early.

June 2009, Hemerocallis and the Etruscan head

There have always been some tulips in this border these are T. Abu hussan, April 2010

The rear of the border is the shadiest in the garden but in summer still receives a reasonable amount of light from about 2pm onwards.  The light being so much stronger in Italy plants requiring full sun in England will grow quite satisfactorily.

The Pennisetum ‘Little Bunny’ have not looked as good as this since.

2 Miscanthus ‘Morning Light’ are planted slightly off centre, I intend increasing these to four by dividing the exisitng plants 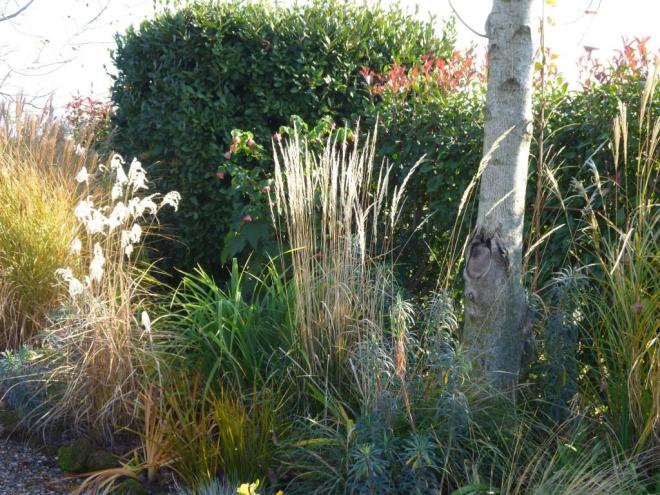 I think that gives an idea of how the border looked in the past.  The fact that there are only images for the same months each year rather says it all!

Last autumn the border was widened and made straight, before I had allowed plants to spill over the path giving a relaxed feel.

I planted the following bulbs.

The following tulips were also planted: Curly Sue, Cape Cod, Ballerina, Sorbet, Single Late Mixture, and Purple Jacket.  The effect I’m aiming for is strong bright colours but not colour-themed.  I planted in groups and drifts and I’m hoping the result will look random but with strong impact created by the groups. 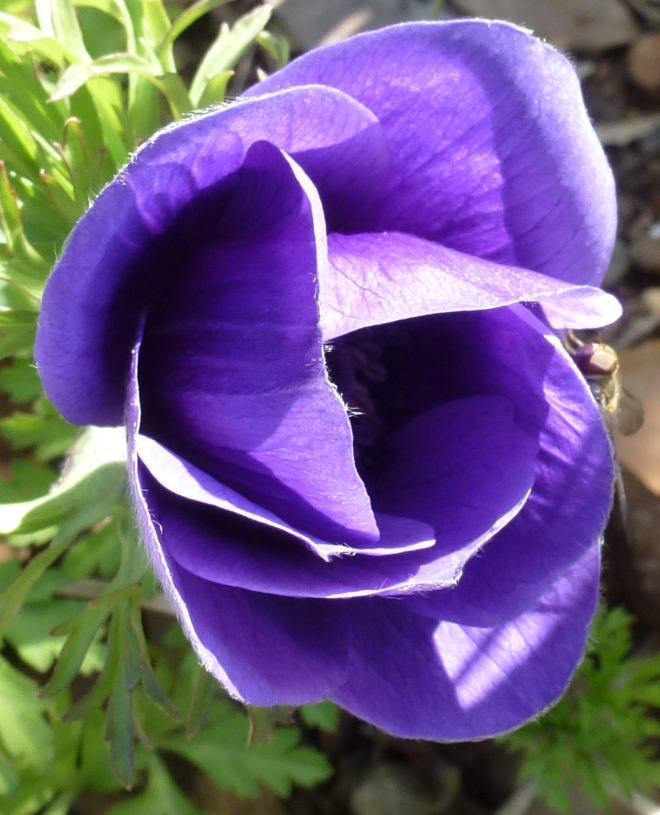 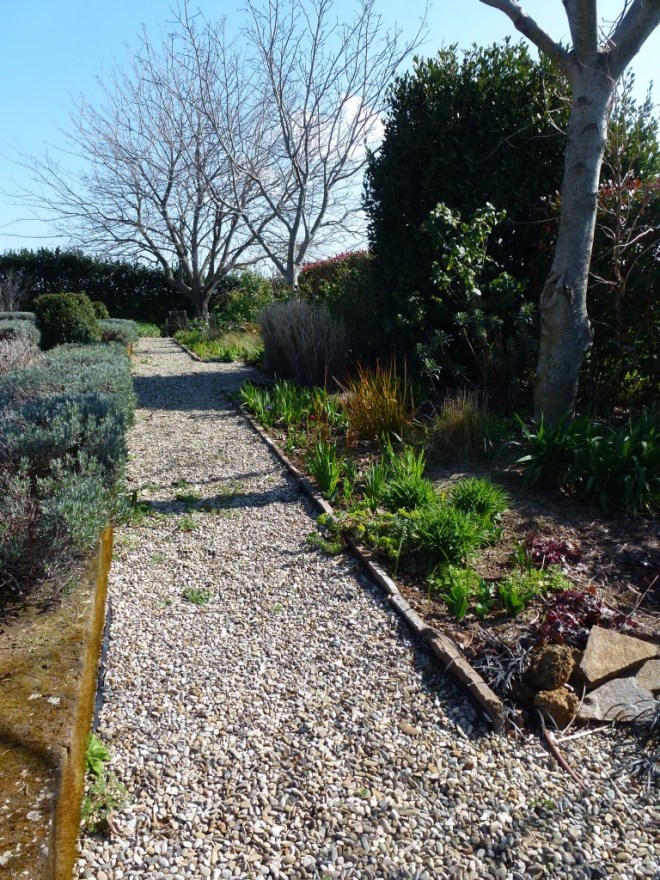 Looking towards the Mulberry from the fig tree

Hopefully this will soon be full of spring blooms

Some of the Anemones are flowering now but I can already see that I need to add some earlier bulbs such as Iris reticulata, crocus different varieties to increase flowering period, maybe some miniature narcissus and move some Muscari.

I’ll post regularly (once a week during spring) and once a month during the other seasons so you will be able to see if I am successful in improving this border.

40 thoughts on “The Spring Walk – Back Border”