Today’s vase is quite a mixture of colours but I think they harmonise well together and the flowers certainly shout “It’s Spring”.  Thank you Cathy for encouraging me to pick flowers to bring inside; it is something I’ve always found difficult to do as I generally hate to rob the borders; but I do love having cut flowers, especially perfumed so this meme makes me look hard for what can be spared.  When there are flowers in the cuttings bed I will have no excuse at all, but it will be a while before there are flowers ready to pick.  If you would like to see what others have found to pick today do visit Cathy at Rambling in the Garden; better still why not pick some flowers yourself and join in!

I posted the species Freesias on Wordless Wednesday and fully intended to pick some and display them in some small vases but when I was walking around the garden yesterday I saw that the hybrid Freesias were also beginning to flower.  I planted these in pots in autumn 2012 and kept them in the greenhouse all last year until they flowered in spring 2013 (it was late April I think); then they were relegated to a place outside where they would be watered every so often, but not very regularly; they remained outside all winter and are just beginning to flower.  They have a fantastic perfume and while I know some of you don’t like the bright colours I am happy to pick these for the vase and leave the species in the garden for now. 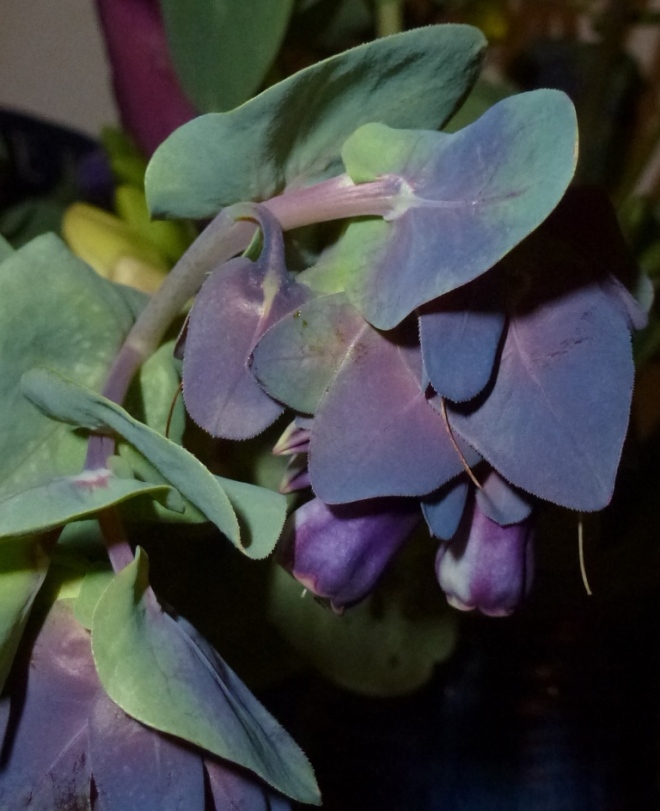 I wish you could smell the Freesias

I decided to add some Cerinthe which are beginning to flower profusely and some blue Anemone coronaria ‘Mr Fokker’ and three Tulip Negrita (planted in 2010, they flower each year, in fact some of the bulbs have split and each is producing more than one stem, maybe a little smaller than in the first year but still making a strong statement in the garden.

21 thoughts on “A Vase on Monday A mix of colours”