The main difference in the view this week is the distant view outside the garden. The hay has been cut and wound into huge rolls; the uncut grass is now golden yellow – the colour of the countryside in summer.

Inside the garden Stipa tenuissima is also showing its golden locks.

Last week I described how the borders on either side of the path were begun, this week I’ll give you a list of what’s planted in the Upper Drive Border. I have a spreadsheet of the plants I have and where they are in the garden with some notes. When I looked at my list it seems this is one part of the garden that I haven’t been so meticulous about adding the names as things were planted.

From the terrace looking west, ideally the cypruss wouldn’t be centre shot!

Achillea also seeds itself into suitable spots, there is a mix of colours in this border

I like seeing the bales of hay in the fields beyond the garden; the lily buds in the foreground are regal lilies in pots 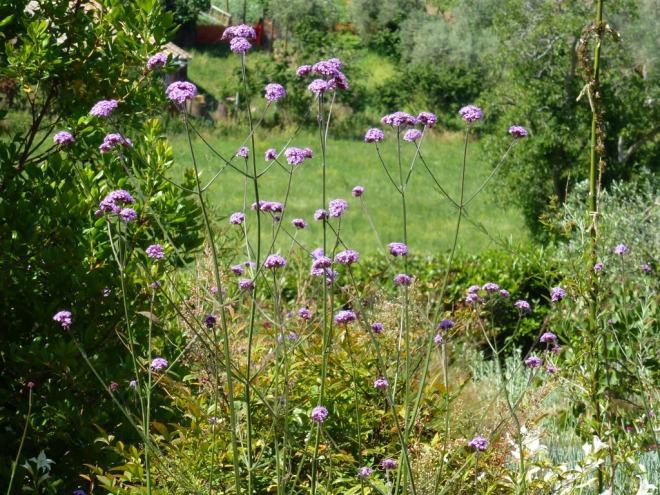 Looking slightly left but from the same position, the other field hasn’t been cut and so is still green; they actually started cutting this afternoon after I took the photographs

Trees: Italian Cypress and Malus ‘Everest’. I think that now the vegetable garden has been extended on the other side of the drive (with the removal of an olive) there is a need for something tall to hide the tomato canes etc. Possible contender would be another Arbutus grown as a standard – it would cope with the drought, it is evergreen and has lovely bark.

Shrubs: Ceanothus repans, Lonicera fragrantissima, Eleagnus x ebbingei, Nandina domestica, Abelia grandiflora (this is a plant that I struggle with. It should like the conditions but this is the third one I’ve tried in the garden and I think this one is dying just like the others.) There is a holly that doesn’t produce berries because it doesn’t have a mate. Various Cistus which I’ll highlight in a post soon, Phlomis suffruticosa (which seeds itself about quite a lot, I should move them to the slope), Hibiscus syriacus and a large prostrate rosemary.

I’ll leave the perennials for another time.

The wild lupin is setting seed, I’d like to collect the seed and broadcast them in the back border as I think they’d work well there, flowering after the tulips.

18 thoughts on “The West View from the Terrace”