We have reached the last Monday in October so time to join with Cathy at Rambling in the Garden where she asks us to fill a vase with flowers from our own gardens or surrounding countryside.  This might be the last vase from the cuttings garden too; I’m a bit disappointed that it is almost all over but it is my fault for not staking the Dahlias properly and not cutting back everything to encourage more flowers.  However, I’m sure this will be a lesson well learned and won’t happen again next year. 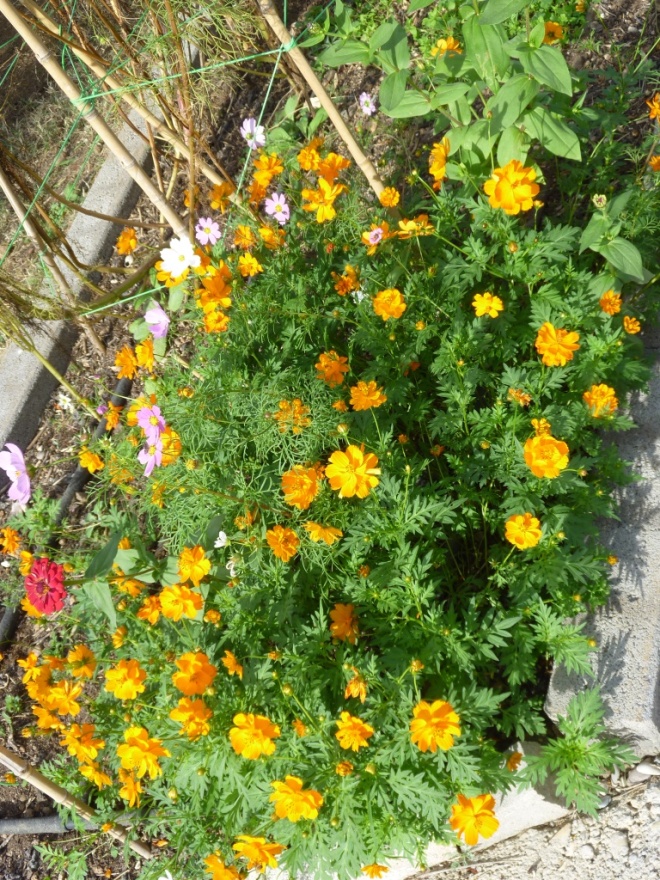 Cosmos flourishing after seeding themselves

There might be a vase of the orange Cosmos because they are full of flower having seeded themselves before I had pulled out all the plants because their stems were all rather short.  I have bought a couple of pots of chrysanthemums in the supermarket; they were virtually giving them away at €3.99 for a large pot.  I’ll use them to pick and plant them in the cuttings bed hoping that I can keep them alive for next year.  It is quite unusual to see chrysanthemums in the supermarket because Italians hate them as cut flowers or in tubs using them only to take to the cemetery especially for the Day of the Dead (Tutti i Santi) which is next Saturday.  I think they were on offer because the suppliers must have got the timing a bit wrong as these will be past their best in another week; I chose the pots with the least open flowers but most were fully open. 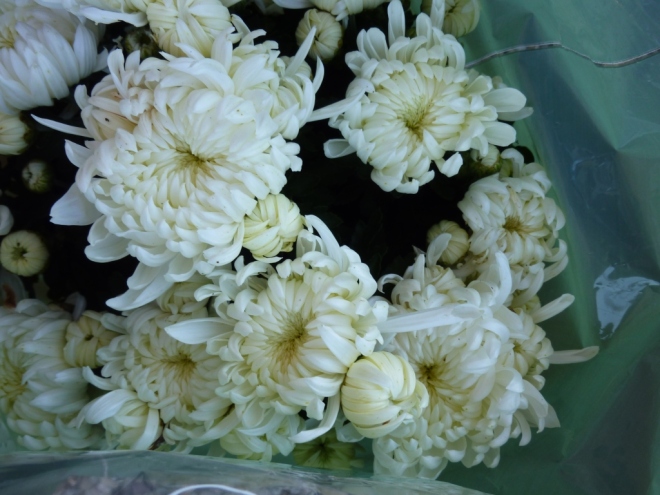 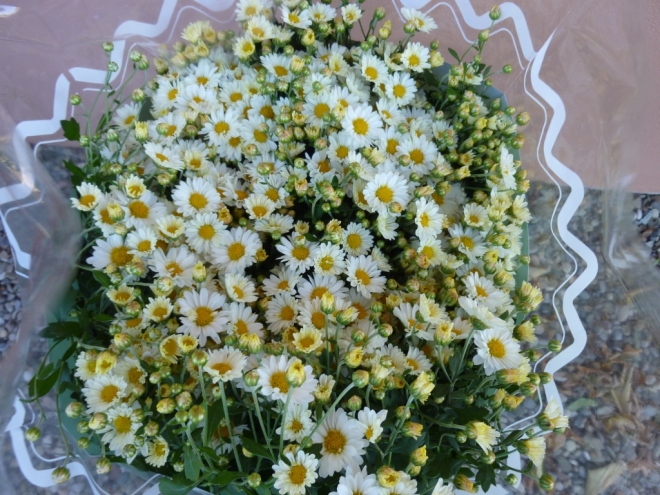 Last weekend, after taking the olives to the mill we went into town for a coffee and wandered around a little market (a bit like a car boot sale without the cars) and I found a couple of vases.  I’d said to my husband as we began looking to NOT allow me to buy any more LARGE vases, what I need is small!  The first thing I saw was a glass carafe the same shape as the large vase I’d bought for my birthday, that was a bargain at €5, but then I saw a beautifully shaped vase in the same colours as the rug in the sitting room; but it was large!  But another bargain, the seller said he was selling everything at half price so it was €20, I’m hoping it will look good with dried grasses.  I’ll show you that another time.

Today’s arrangement uses the two glass vases that are the same carafe shape but different sizes.  I’ve started to prune the olives as they grew so much during the summer; therefore today I have foliage.  The olive branches give a nice soft outline but needed something else to give some strength so I used some Senecio, I’ve taken cuttings of this to plant in the large island and the slope so I should have plenty of cutting material in future. 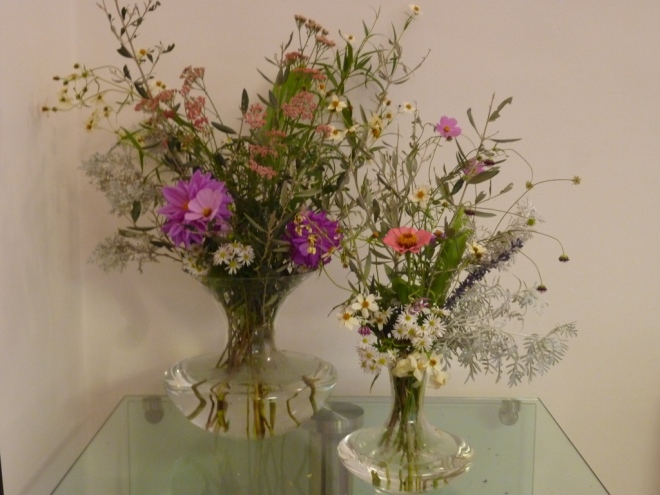 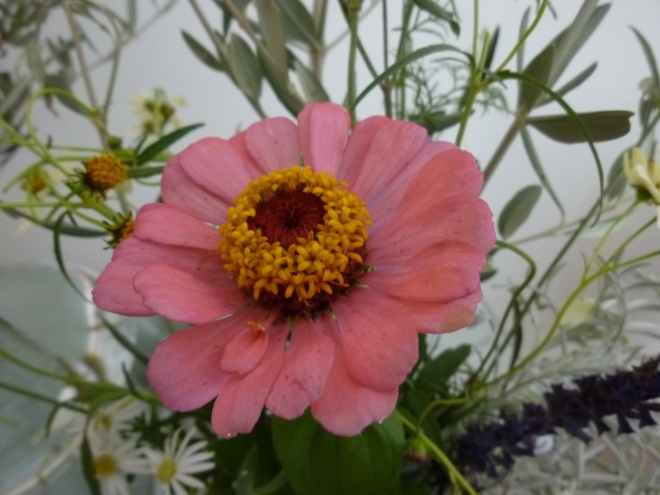 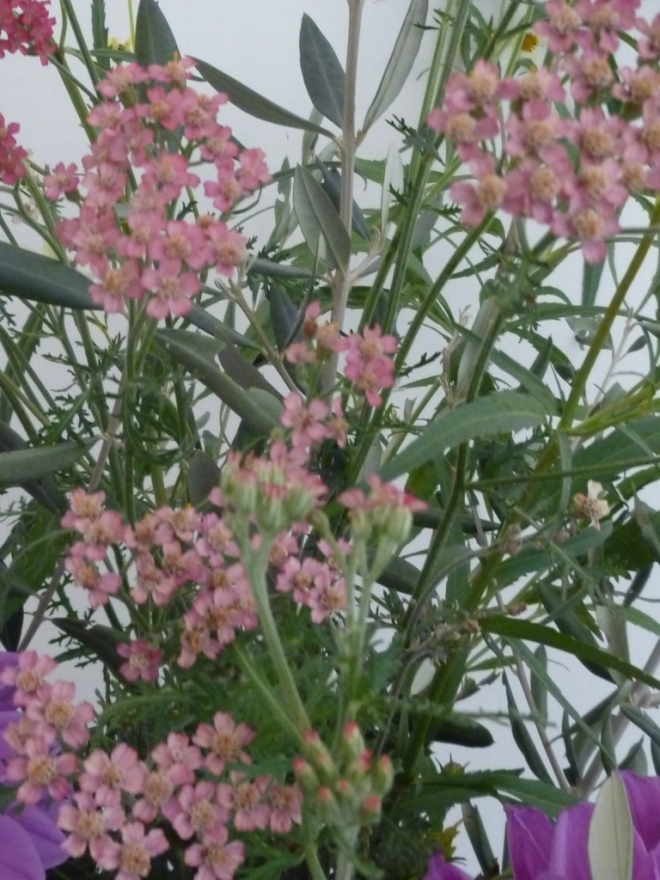 The flowers included are 2 Dahlia Magenta Star, a few stems of white Aster, Cosmos Pink Sensation, Achillea and Zinnias.  Zinnias will definitely have a place in next year’s cuttings bed as the flowers seem to last for a long time in a vase and on the plant. 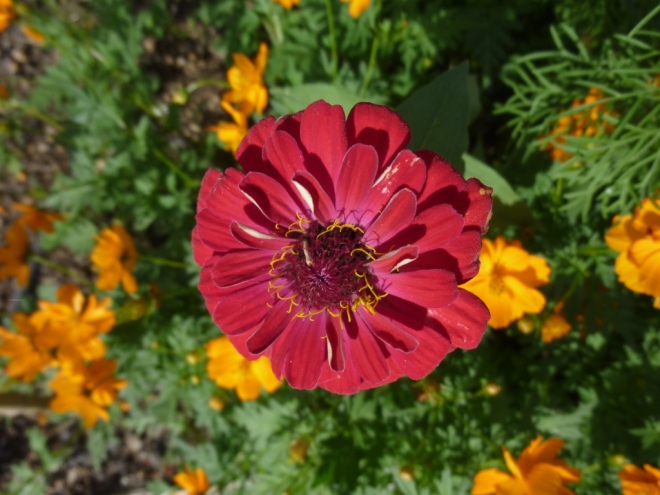 The Zinnias were given to me at the beginning of September as tiny plants, I planted them not actually believing they would flower this year

I would not have believed how much material the cuttings bed would produce in its first year.  Already I have planted some wall flowers and Sweet William in another bed which will become a second, smaller, cuttings bed next year, I’m thinking of sowing some hardy annuals in this bed, maybe as soon as I’ve removed the zucchini plant that is still producing the odd zucchini. 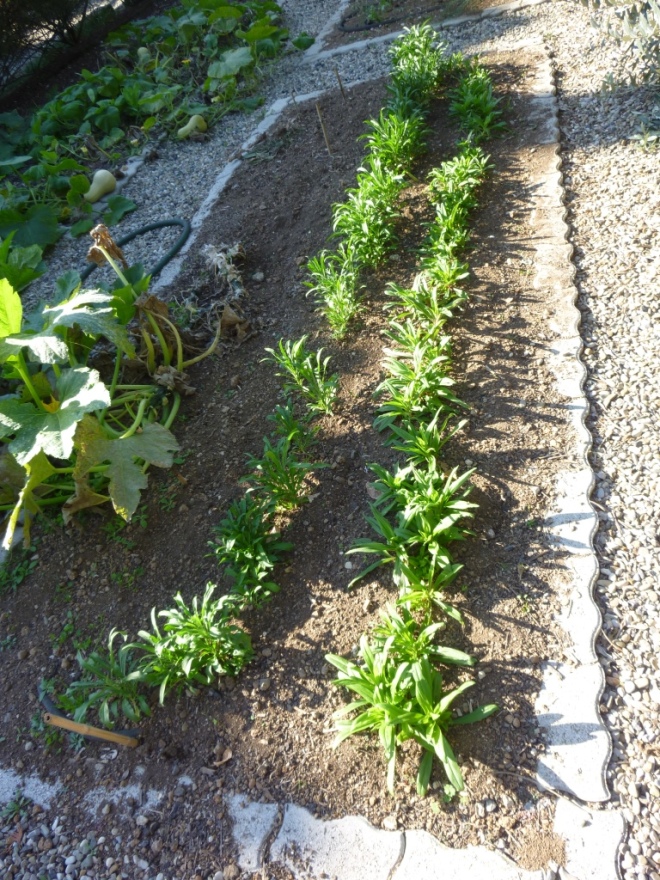 In the background you can see the second crop of butternut squash my plants produced.  I harvest 7 large squash in August, these are smaller but I’m hoping they have time to ripen.

I have been removing some of the plants which have finished flowering and begun planting some Narcissus.  I watched a Sara Raven video about how she overwinters her dahlias; she leaves them in the ground and mulches heavily on top of them to protect them, she has them under-planted with narcissus; and as they will need to be irrigated during the summer I decided to do the same thing as they will be over before the dahlias come into growth.  I have also been given some rooted cuttings of green chrysanthemums which I will pot on and plant out next spring so that they are bigger stronger plants, after that I will leave them in the ground over winter. 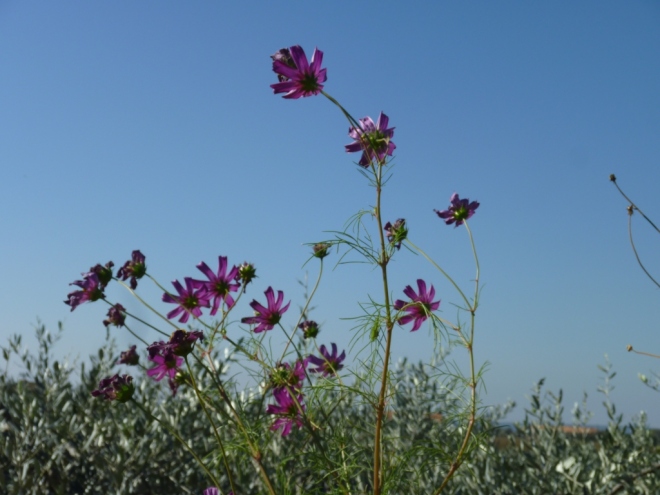 A few Cosmos remain but they needed cutting back severely long before now – they’re taller than the olives!

What worked:  Cosmos produced masses of flowers and would continue for longer and produce more if cut back more and all flowers were picked or at least dead-headed.  The annual dahlias also produced well with the same proviso.  Knautia produced huge amounts of flowers but got a bit out of hand – cutting all the flowers produced would keep it flowering much longer.  Lilies in pots produced lots of flowers but lily beetles were a constant pest.

The tangled mess that is Knautia, Aster Monch, and Aster ‘Monte Casino’

I will hope the Aster ‘Monte Casino’ becomes a bigger patch, even though the season wasn’t long, I loved the effect these created in vase.  Sunflowers were brilliant who knew they were such a productive cut flower – I need to stagger the sowing next year to have flowers up until the frost, this years are all over now.  Rudbeckia again need sowing a little earlier 3 plants is enough.

Rudbeckia – worth the space, but finishing now

The Jerusalem artichokes produced masses of flowers over a relatively short season but will also, hopefully, have produced a crop – I don’t suppose I could get rid of them even if I wanted to! 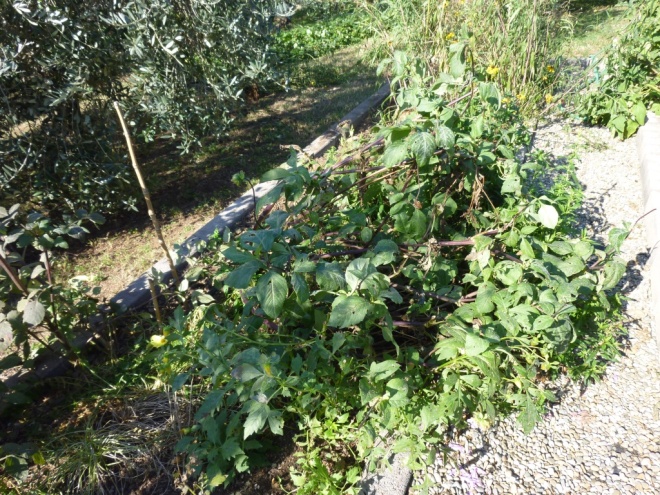 And what didn’t produce so well: Antirrhinums needed to be sown and planted out earlier and supported to keep the stems straight, I have used very few of these because of the bent, short stems.  The Echinacea I grew from seed were too small to flower this year so they took space but weren’t productive, hopefully next year they will flower for a long season.  Cornflowers were sown too close together and so didn’t perform very well; I will grow them again and try to give them more space.  The Bishop dahlia didn’t last at all well in the vase, I’ll leave one plant but remove the others to give more space to other plants.  The Gerberas’ stems were rather short and I didn’t feel that they combined well with other flowers in a vase; I may try lifting them and placing them in the greenhouse to over-winter but if they don’t survive I don’t think I’ll try them again. 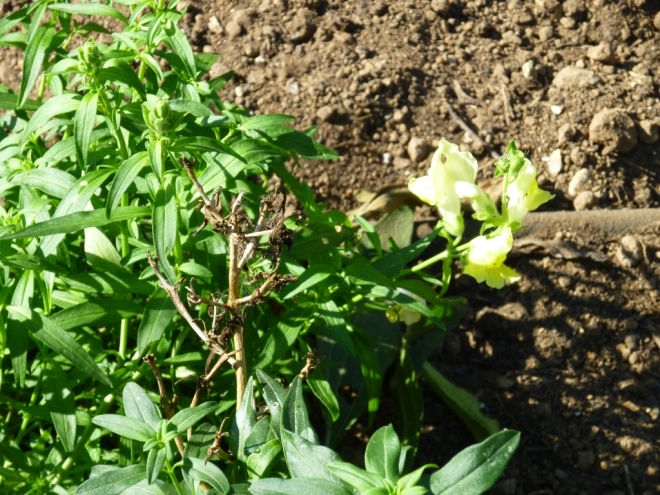 Do visit Cathy’s post to see what others have found in their gardens today to put in a vase.  Thanks for hosting Cathy and for thinking up this inspirational meme.