It is the first of December but if you walked around my garden today you would be forgiven for thinking that it was spring.  The temperatures in the last week have risen considerable to those of only a few weeks ago.  Last night the minimum temperature was 15°C, and that was the daytime high a couple of weeks ago, during the day we are back to the low 20’s°C.  So what can I find to put in a vase this Monday from my garden for Cathy?

As I walked around very unsure of what I would find to pick I noticed that my Miscanthus have new growth that should begin in March or April and that the Perovskia in the formal beds have their new buds about to sprout.  Then a big surprise I noticed that the Choisya ternata is covered in about to open flowers.  The plant has already had its usual small flowering for autumn, this is the SPRING flowering I’m sure – what will happen if the weather is as cold as we are promised at the end of the week? 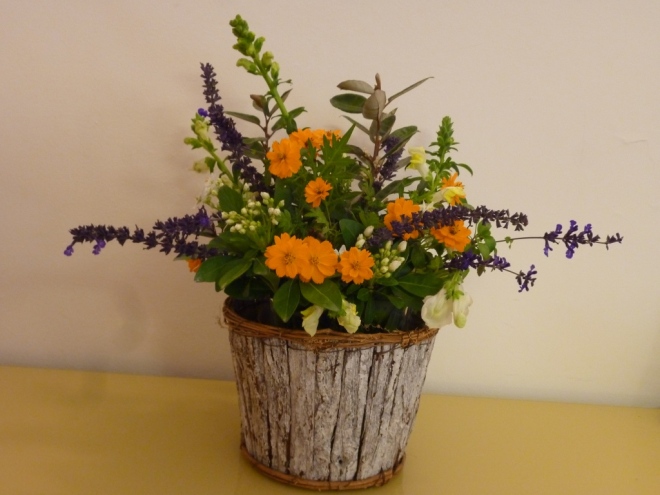 The vase (basket) on the new sideboard

As they may get frosted at the end of the week 5 stems of Choisya ternata were duly picked, followed by some orange Cosmos that refuse to die (I have sworn not to plant this variety next year, I feel that are trying to make me change my mind).

I re-used the Elaeagnus from last week 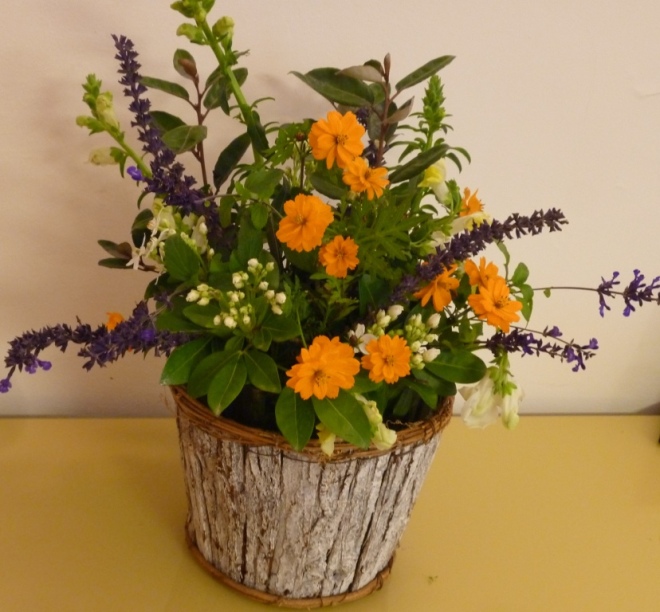 Salvia ‘Indigo Spires has never been known to flower in December before, and better still is producing some suitable material for cuttings.

So I wasn’t forced into using only foliage this week; will my luck hold for another week?  I doubt it.

Thanks to Cathy at Rambling in the Garden for encouraging us to pick something from our own gardens every Monday, do visit to see her vase this week (she has roses) and what other have come up with.

29 thoughts on “In a vase on Monday – still some surprises”