I am not actually at home today but I know Cathy at Rambling in the Garden won’t mind my having prepared this vase earlier.

There were more tulips in the pot I forced in the greenhouse so I wanted to pick them and enjoy them before being away for a few days.

I saw an idea similar to the one I have used in a book, but actually I like my interpretation slightly better.

Tulips ‘Brown sugar’ are surrounded by rosemary stems cut to roughly the same length and placed around the edge of the square vase.  The stems of the Rosemary were ample support for the stems of the tulips and the blue flowers of the rosemary also make a nice gentle contrast with the orange tulips.

I tried to photograph them in the kitchen but there is too much background. Tulip ‘Brown Sugar’

The only place with really good light is the garden

I didn’t trim the rosemary foliage so I hope the vase doesn’t become to mucky but my thinking is that the foliage is almost like needles and so shouldn’t rot quickly in water. 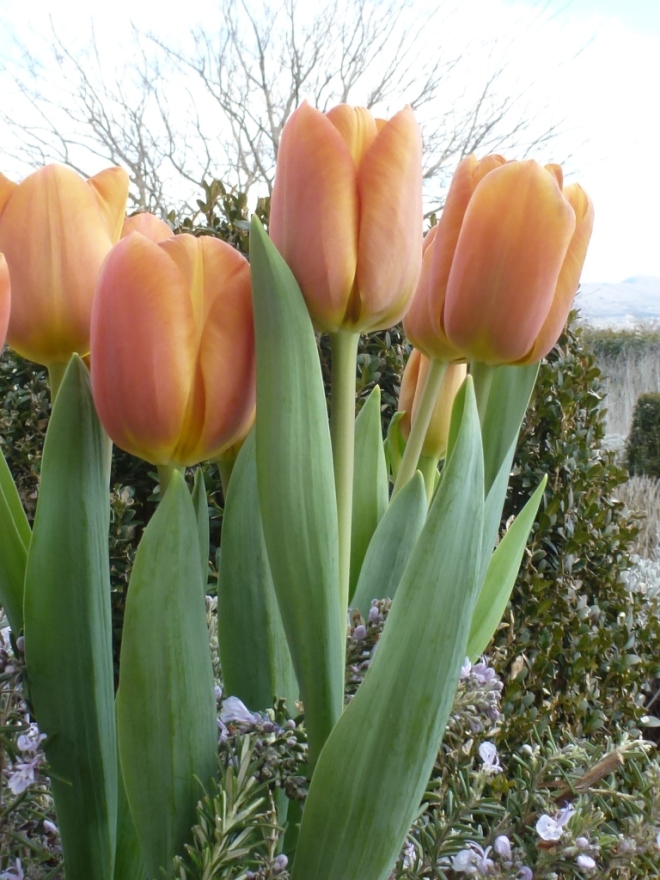 Last week’s vase continued to look lovely I left on Saturday, I didn’t slit the stems of the tulips just below the flowers as is recommended it you don’t want them to continue growing in the vase and becoming a little wayward; I rather like my tulips like that but it is something I’ll try in future when I have more tulips available.  There was an added bonus in that I discovered that ‘Brown Sugar’ is scented; in the garden I’ve never noticed the delicious honey perfume.

Do visit Cathy to see what she and everyone else has found in their gardens this week, the first Monday in March.  Better still why not join us; this is about enjoying something from our gardens indoors and something just plonked in a vase is as welcome as a complicated arrangement (perhaps more so, then we can all gain ideas for our own flowers)

26 thoughts on “In a vase on Monday – more tulip delights”