I would like to thank everyone who has contributed with their thoughts, suggestions and ideas.  This for me is like having a good gardening friend at my side; mulling over ideas with a cup of coffee or perhaps you’d prefer a glass of wine?  Don’t be afraid to leave a comment with your thoughts.

I’ve stopped naming these posts ‘The Formal Garden’ because in future it won’t necessarily be formal at all, time to move on.  Although I haven’t finalised my ideas and plans work has begun on removing the lavender and Perovskia.  I thought it would help me (and you) if you could see what the long views from either end of the terrace look like now.

The terrace wraps around three sides of the house so these long views are even longer if you’re standing at the side of the house where cars arrive.

From the centre of the RH side of the terrace. The RH walnut is almost in line with the pillar

I am pretty sure that I don’t want the path to be 3 metres wide, the width between the pillars on the terrace.  The new central planting will be able to extend to form a line that encroaches onto the path.  I don’t want a hedge, but spheres and mounds of ever-greens and ever-silvers that visually form a line.  The Large and Small Islands and (what is now the circular Rose bed can be extended so that their edges form the edge of the ‘path’.  I might add small trees to these beds being sure first that they won’t interfere with the view from any of the points where we sit on the front terrace.

Lemon trees in pots are placed by the terrace at present and it would be possible to plant close to the terrace with plants that you would look over when sitting at the table, but that would hinder the impetus to movement which the long view (with some kind of focal point) is intended to do. 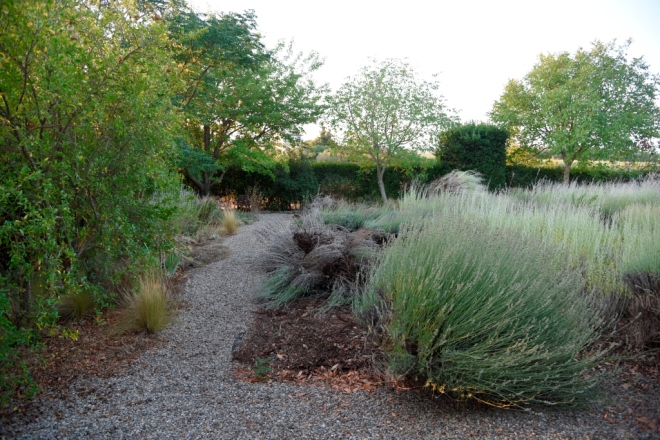 From the centre of the LH side of the terrace

The path needs to move to be in line with the centre of this view, the Left hand border can be extended to make it even wider the space created can have spheres included to link it visually with the new planting, leaving the basically perennial border as it is; I removed 6 roses before I went on holiday as they really only looked decent for a few weeks of the year.

Lavender and perovskia waiting to be put through the shredder 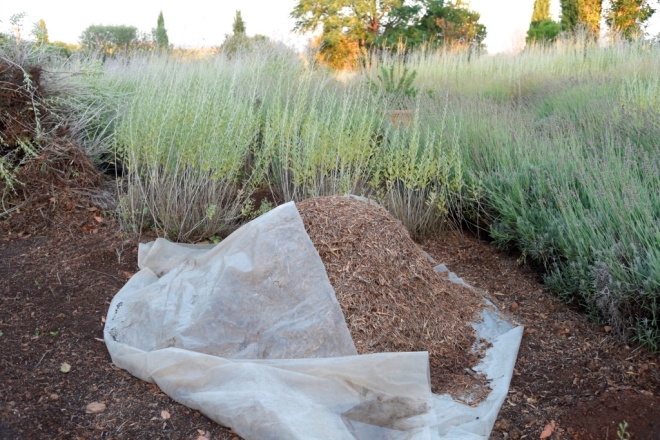 This mulch will be invaluable for coving the soil after the new plants go in.

This is the pile before the heap in the previous image was shredded.

Looking east from just beyond the fig

Now that the lavender has been removed you can see one of the (I hope) small issues which I haven’t mentioned before.  The garden slopes very gently down from the terrace to the south boundary.  We had solved the problem with a very low tuffo wall, but it might work better if the existing path is removed and a new path though the new trees is created and I think this would work well if it wasn’t straight but curved around the new trees, creating a little mystery.

Looking west from the mulberry tree along the ‘Spring Walk’

Next time I’ll give you a list of the plants I intend using and some images of a couple of gardens that have inspired me.

Of course with the heat this summer one option, I haven’t mentioned already, would be to put in a swimming pool.  My husband isn’t keen on that idea for many, many reasons, but there is nothing like being able to cool off whenever you need in a pool.

45 thoughts on “Changes in the Garden 3”