The wind is howling and the temperatures are falling; I just checked the forecast and terrifyingly we are threatened with temperatures falling to minus 5°C for the next two days and remaining cold for at least the next week.

Certainly it isn’t the time to be out in the garden but it is relatively warmer in the greenhouse and seed sowing has already begun to supply plants for the vegetable and cuttings garden for the summer to come.  Last year I sowed some seeds in the early autumn but the plants grew too quickly and were leggy by the time they were planted out.  There are some plants that I will sow later this year because I discovered they need more heat to grow strongly.  Zinnias, although I can’t complain about the crop would benefit from a later sowing so I’ll sow those in early spring.

So come in to see what is growing already. 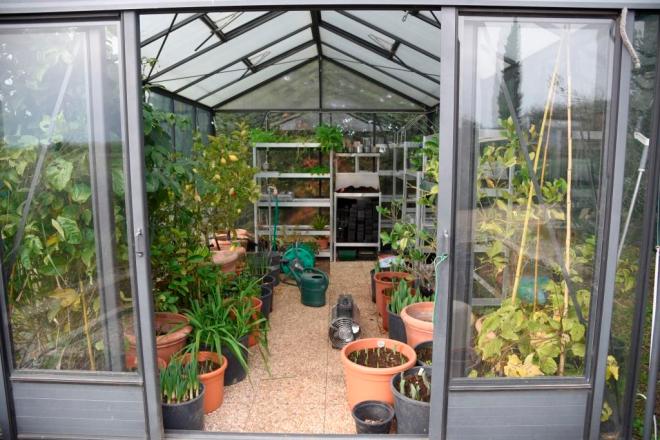 Welcome to the greenhouse in January

Already the space is looking quite full but as more plants need space I will keep reorganising!  The pots of bulbs will hopefully flower before I need a lot more space.  Most of the large pots are tulips but there are also some Narcissus, which are being very slow; Dutch Iris, Ranunculus, and Fressias. 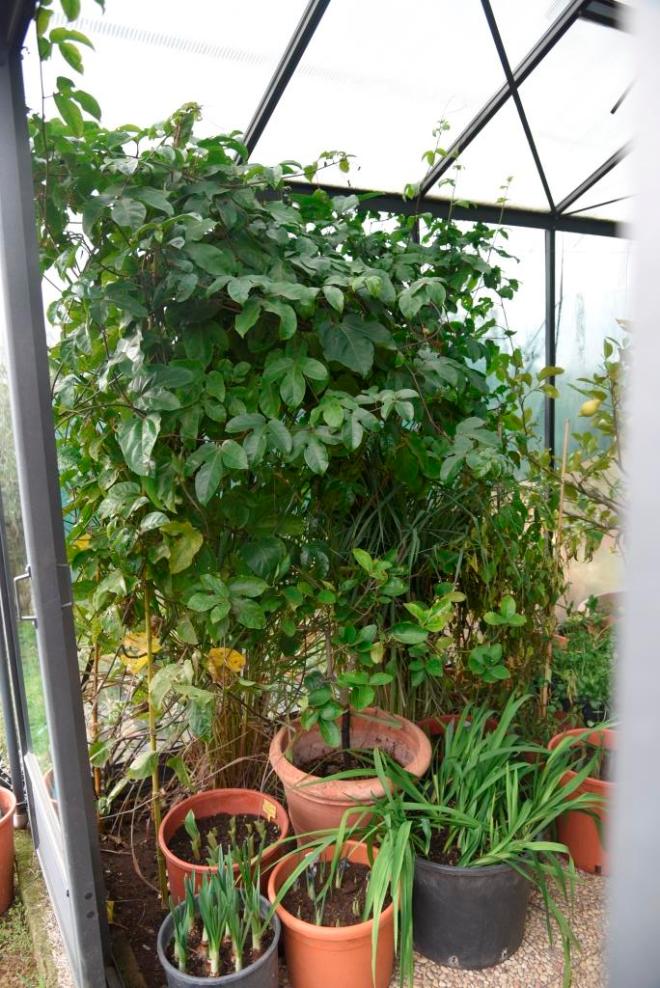 The edible passion fruit I grew from seed

A friend gave me some seeds of various passion flowers when she returned from a holiday in Costa Rica, the compost and the seeds looked very old and I didn’t hold much hope that any would grow, however I have three plants of the edible Passion fruit, this one I planted into the ground in the greenhouse last spring; I’ve been astounded at its growth rate, I’ve even been cutting some of the top growth back.  It thrived on the incredibly high temperatures in the greenhouse last summer, some days the temperature registered 50°C despite the new external shading.

You can just see two clumps of lemon grass under the passion fruit; one was from a bought pot the other I grew from seed and at the end of last year I was able to harvest some stems. 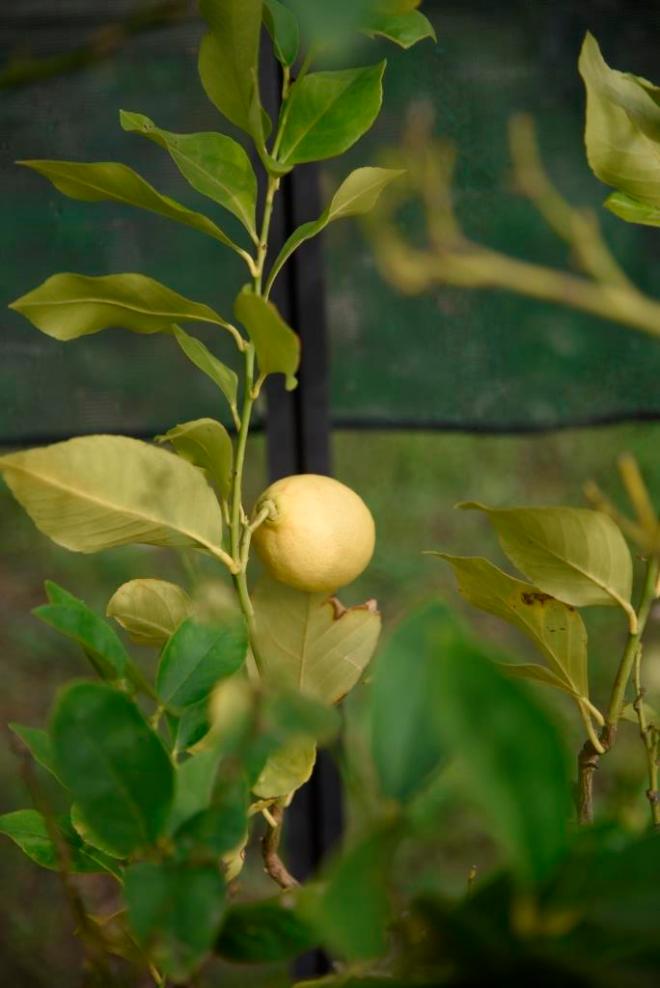 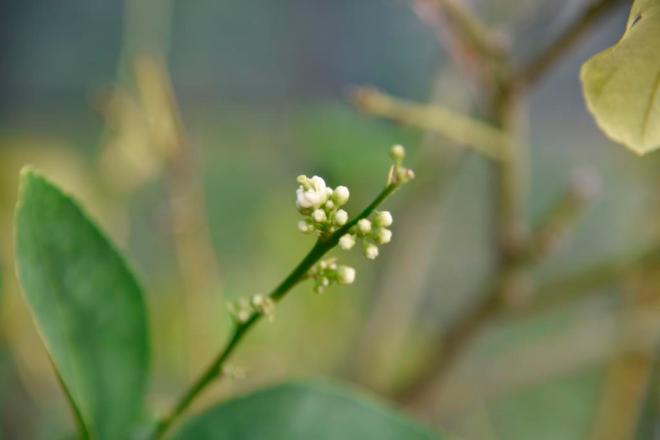 Buds on lemons, the flowers are wonderfully scented 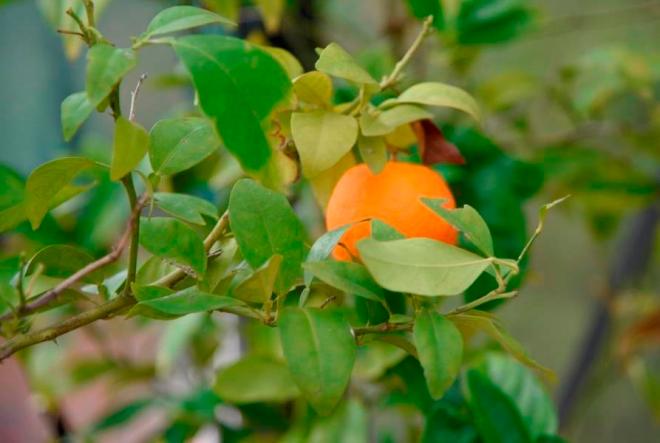 The oranges are ready to pick

Not really a viable crop as there are only 3, but it is nice to have them. 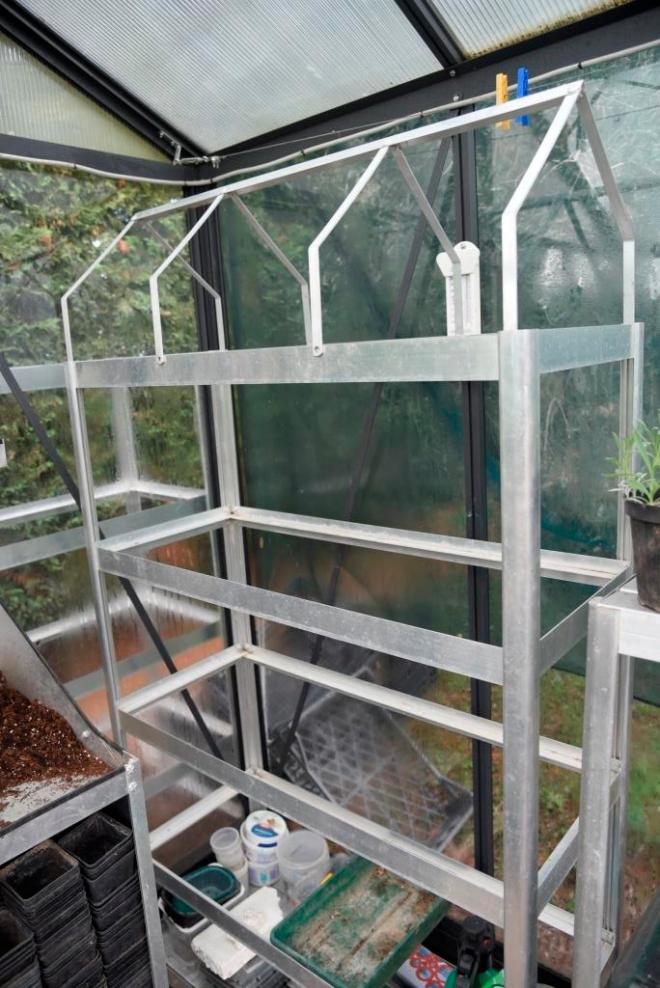 As trays of seeds germinate they will be moved onto the stand, I have another heated tray I can use for plants that need some heat as they are growing on, luckily most are fine in a frost free environment but aubergines and peppers benefit from some extra warmth.

In the propagators I’ve already sown the following Lamb’s Trophy lettuce, Red and green Salad Bowl lettuce, Peas (2 x 40 module trays) some to eat as pea shoots and one tray to plant out in February. Mixed Oriental Salad leaves, Misticanza (which always contains a lot of mustard) and Chard Bright Lights have already germinated.

There are also some flower seeds sown in one fifth-size trays or small modules.  Some I’ve sown now because the seed packs tell me that they may need some periods of warmth followed by cold so while there aren’t too many other plants needing to be sown it seems worth trying to start them now.  Crimson, Giant White and mixed Antirrhinum; Alstroemeria aurantiaca, Cleome spinosa Violet Queen, Euphorbia oblongata, Eryngium alpinum, Ami majus and Estoma ABC mixed are all for the cuttings garden; Melianthus major and Lychnis white (from a friend’s garden) will be planted into the borders 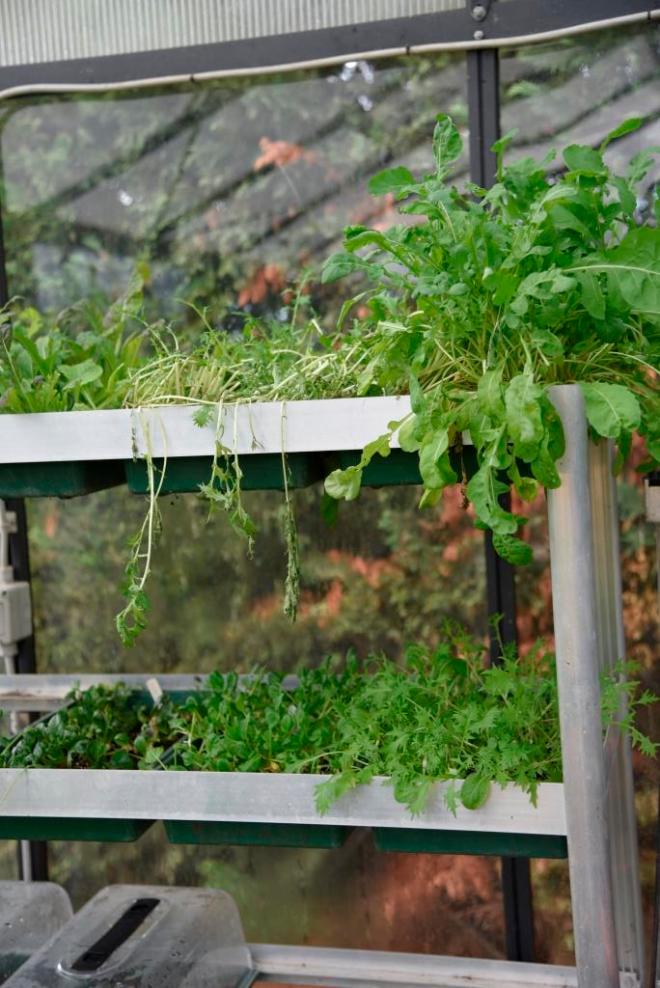 Growing salad leaves to crop repeatedly through the winter is one of my great joys; once germinated they need no extra heat and continue to produce fresh leaves over a long period.

These germinated in 5 days

Alcea, a kind gift from Chloris at the Blooming garden

When I was in the UK last autumn Chloris from “The Blooming Garden” very kindly sent me some rooted cuttings.  A beautifully coloured salvia that I had admired and a very special shrubby hollyhock (Alcea) which is growing really well; I’m thrilled as it is always so special to have plants from friends and even more special when they come from a blogging friend.  Perhaps you can remind me of the variety of the Alcea Liz (if you read this) 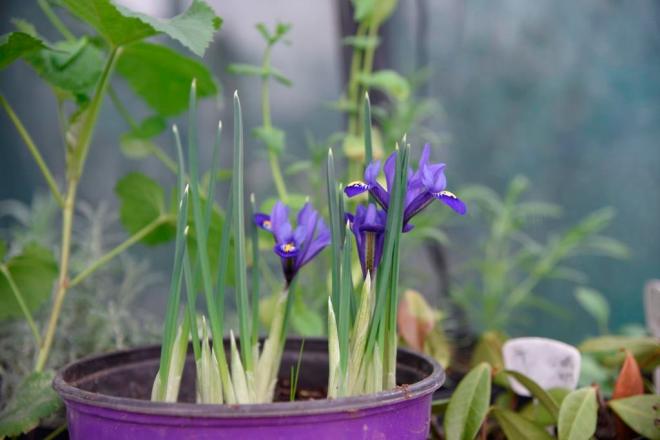 Iris reticulata, another pot where the bulbs are NOT flowering all together as I would have wished.

What are you sowing in your greenhouse this month, have you begun sowing?

Do you find bulbs grown in pots all flower at once or are they like mine and flower over a longer period?  Good gardening!