Think how much pleasure you gain from a vase of flowers in the house; think how much more pleasure there is when you have grown the flowers from seed and grown them in your own garden.  This is what Cathy at Rambling in the Garden asks us to do each week and I want to repeat that she is a star!  Creating vases even if she is far from home, plonking a few things in a vase to encourage every one to join in – you don’t need to be an expert flower arranger to gain pleasure from your flowers, anyway I feel it can’t be said too many times, THANK YOU CATHY.

I actually began my cut flower bed before the meme started but how the idea has grown.  Would I really have picked flowers each week?  even if there were masses of flowers, other constraints on my time would I’m sure have led to weeks without flowers, instead there is now not a day when there isn’t a vase somewhere even if it is a single stem in a small vase in the kitchen.

The first vase was actually put together on Thursday ready for a small supper party on Friday evening; it is now in the kitchen, minus the lilies looking fresh,  I smile every time I glance at it.

I’m considering sowing some more of these, I think they are gorgeous and I didn’t get great germination from my earlier sowings.

This is only the second year I’ve grown Zinnias and I am completely bowled over by them especially this one with perfectly pure white petals with slightly green centre. 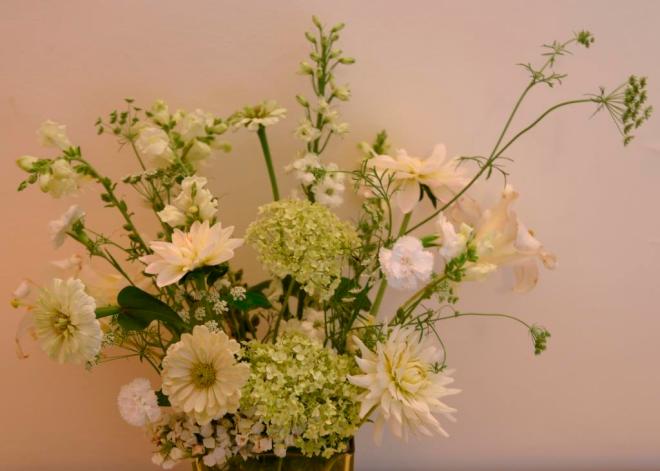 I really love the white and lime green of this vase, it is one of my favourites from all I have put together in the last couple of years

And now, as they say, for something completely different!

If you saw my post about the cut flower garden last Tuesday, you’ll know the the sunflowers had put on a huge spurt of growth and today the first two flowers are open – I had to use them in my vase today.  Also flowering are the first Gladioli of the year; these were planted last year and I don’t think I even saw them in flower as we were away for much of June and some started and finished in our absence.  this presented me with two heavy stemmed types of flowers which I usually find easiest to have in vases of their own, but I wanted to attempt something a bit different so I picked masses more flowers in the yellow and crimson/purple range and just slowly began adding them to the vase – I wasn’t sure when I should stop so took some images at stages so I could compare the final result.

Then I added some Zinnia

Then I added Deep coloured Cosmos

Obviously I couldn’t lift this to carry it outside so I had to use flash for the photographs but that probably doesn’t detract too much from the rich colours in today’s vase.

A few orange and yellow Cosmos I also picked where put in a separate small vase as I decided that I add reached the moment when it was time to stop adding anything else.

Do visit Cathy to see what she has found for her vase and props today or why not join us addicts and become a regular contributor.

Have a lovely week.

50 thoughts on “In a Vase on Monday – Abundance”