It is over a month since I last wrote about the vegetable garden and there is much more to harvest now.

Some of you commented that you were surprised I grew so many courgette plants (4).  As I explained in my replies I always loose some plants and that has been the case this year – one has just stopped producing; interestingly its foliage is slightly different to the others so a rogue seed maybe.  I always grow Romanesco courgettes or zucchini as they’re called here and in the States.  I pick when they are very small, about finger size.  I will grow another plant to replace the one that I’ll be removing as the plants sometimes stop fruiting in mid-September because they have produced so many, a new plant may keep going into November, if we’re not fed up with eating them by then.  One dish I like is Spaghetti with zucchini and their flowers in a creamy truffle sauce, worth trying if you need new ideas.  How do you cook your courgettes?

When I wrote last (June 10th) I was eagerly waiting for the tomatoes to ripen.

Marmande and others from seed given by a friend which look similar! 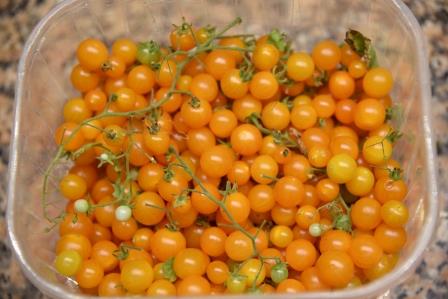 I would recommend trying these if you like to add tomatoes to rice or Quinoa salads as you add them whole and they don’t make the mix wet, plus as you bite into them you get a burst of fresh flavour  in your mouth.  Downside is they are bush rather than climber so a pain to harvest; I think they would be worth trying in a hanging basket, I might try it next year although giving them enough water might be difficult in a basket here.  I don’t have flowering baskets either for that reason.

More Marmande with Golden sunrise, and a green shouldered variety I grew from saved seed from a mixed pack last year so no name 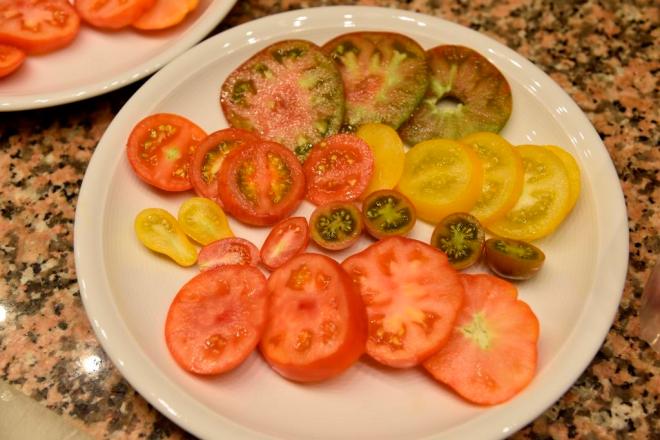 The first tomato salad with a mix of tomatoes (July 3) 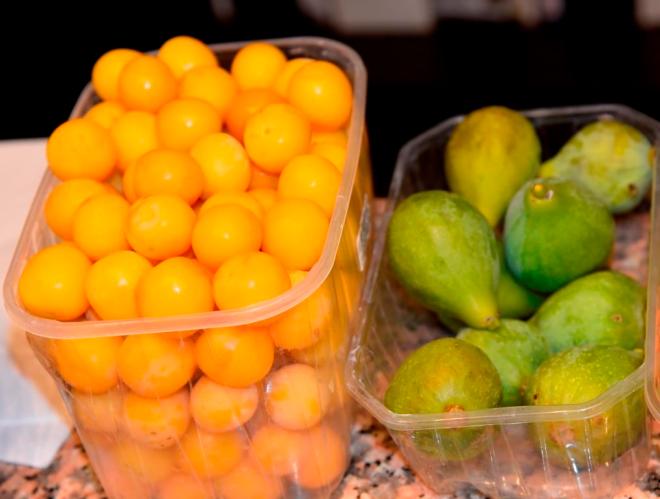 Small yellow plums from the lane and my favourite figs!

The figs have produced a good crop of perfect figs this year, we eat them with Prosciutto, or squashed onto my homemade focaccia. I love them just as they are too.  This year because there have been a lot I’ve also served them cooked – cut in half and laid in a grill pan with a little honey and vinegar poured over them and a dob of Gorgonzola.

Other than just eating these tiny sweet plums I pickled some in a couple of jars to eat with cheese or cold cuts.

The plum I planted in the garden 2 years ago produced a decent crop of golden yellow plums; some I cooked with spices and Marsala, some I made into chutney, some were juiced and the rest eaten as they were.

Yesterday I picked the first red peppers and aubergines which I made into Caponata along with some of the tomatoes.

We started eating sweetcorn about 10 days ago and this week I harvested the rest of the crop as they were all ripe and don’t improve if left, so I cut the kernels from the cobs and froze them.  Frozen sweetcorn isn’t available here in the shops as corn is perceived  as animal food and it is true that maize is grown all around us (the biggest crop be far) to be made into silage. In the north of Italy it is dried and made into flour for polenta.

Dwarf beans are flowering and yaed-long beans are beginning to climb their canes.

What are you eating from your garden or allotment this week?