This month I don’t want to focus on individual plants but on the forms created in the garden by pruning and pose the question is this natural?

A few years ago I would have answered immediately “No of course it’s not natural!”  How could it be – the gardener intervenes and cuts back growing points. this usually has the effect of encouraging two growing points instead of one and is a reason to think very carefully before you cut if you want the plant to grow into its ‘natural’ form. 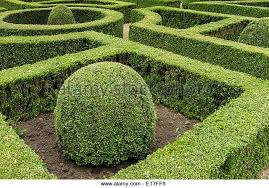 Formal parterres maybe the first thing one things about when discussing clipping and pruning – it is something I used to hate but over time have come to greatly admire.

We have all seen the results of plants ‘pruned’ by so called professional gardeners who come to work in your garden armed with a hedge trimmer!  This isn’t pruning!

What I want to discuss today isn’t really pruning as such either – it is sculpting the shape of a plant to a form that fits our needs or desires.  So, you say, the answer to my question is still “no”, it isn’t natural; but I’m going to disagree.  Nature also sometimes prunes in this way too.

Think about wind sculpted trees growing near the coast. 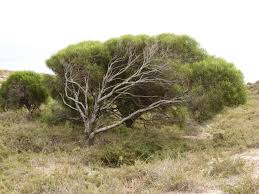 Close to our favourite beach all the trees and shrubs have  been sculpted by the wind; the sight of all the mounds and tight ‘pruned’ forms was one of the inspirations for this post.

Think about grazing animals eating new soft foliage and leaving the older leathery leaves because they are unpalatable.

Someone with a hedge cutter couldn’t have done a better job of creating these fascinating shapes.

What about insect damage; I showed you an insect (Lachnaia sexpunctata, thanks for the ID AnnaMaria) that was eating the new foliage on the Quercus ilex newly planted last autumn, here they took most of the, obviously delicious, emerging leaves.  But now that new growth is much slower the insect has disappeared allowing the trees and shrubs to to grow a little, but it is a little because it is hot now and there is little or no rain (most years) so the plants have a decidedly ‘just been pruned appearance’.  Why isn’t the insect still eating the new foliage?  Apparently Lachnaia disappear when the weather warms up.

The thought processes behind the new planting in my own garden have been influenced by these natural areas.

View of the upper drive border (June 12) – just look at that green 6 weeks ago!

If you add some grasses into the mix, the effect is even more like natural Mediterranean areas (early June)

There are some plants whose natural form is quite a tight shape so it isn’t always up the the gardener to intervene.

To add your thoughts on foliage this month (in whatever way you wish) please just leave a link to and from this post; I would also be very interested in what you think.  Enjoy all the foliage in your garden, Christina