No, sadly I don’t have any tulips flowering but I have been busy planting my tulips in the garden and in pots in the greenhouse.

I ordered my bulbs very early this year, way back on the 25th April.  Why so early?  The company I buy my bulbs from operates a policy of delivering first to the people who ordered first unless you ask for a later time.  This year I wanted to experiment with timings for chilling tulips until flowering so needed to have the bulbs delivered early so that I could begin chilling them ASAP.

I buy my bulbs from Peter Nyssen partly because the prices are competitive especially if you buy 50 or more of any one variety and partly because they deliver to Italy.  I’ve always found the bulbs to be good quality.

All the tulips and the Paperwhite Narcissus were put in the fridge (luckily I have the use of one that isn’t my food fridge) on 21st September on a medium setting which should have guaranteed a temperature of less than 8°C.

I began planting into the ground yesterday; and have almost completed the task; I’ll share images when they flower – I can’t wait!

After planting the tulips I transplanted some Muscari from another bed that needed dividing and also seedlings of Euphorbia myrsinites, which will eventually provide ground cover but won’t stop the bulbs growing through it.  There are masses of self seeded Euphorbia in the gravel that I have been putting into modules so they can be planted out in early spring. 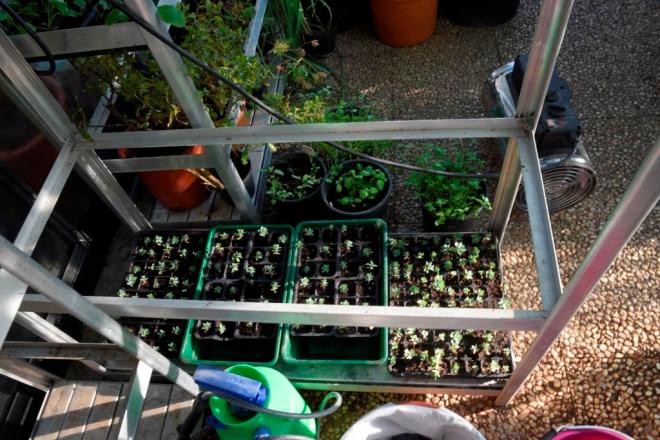 For the tulips I want to use as cut flowers I began planting into pots (Batches of 25 for the first planting on 16th of November) and batches of 15 for the 29th November and 6th December.  I still have more to plant after Christmas to hopefully have a nice long season of flowers to cut.  None are actually showing yet, but I hope very much that by the New Year some will be well on their way to flowering – I’ll just have to wait and see how long they take.  The greenhouse is only kept frost free but so far daytime temperatures have been  between 15 and 25°C.

These are the tulip pots

The pot with green seedlings in has rocket (arugula) sown on the top of the soil; I can use it in salads until the tulips push through the soil or maybe I can even leave it while the tulips flower.

Last year the first tulips to pick were T. Exotic Emperor.  they had been planted into pots in the greenhouse but I didn’t keep very precise records except I picked them in the first week in February for aVoM.

T. Exotic Emperor in a vase on Monday 1st February 2016

T. Exotic Emperor was my favourite tulip last spring so I will have several timed pots growing to give me flowers over an extended period.  See my post about the first tulips this spring here

Have you planted bulbs this autumn.  What are your favourites?