Our weather is strange; three or four days of very cold weather and rain; then a couple of days of glorious sunshine, so bright it was almost too strong to be eating lunch on the terrace without some shade!

I suppose this is typical spring weather but the lows definitely feel colder than most other years.

As I walk around the garden I am aware of the plants which suffered burnt leaves from the icy winds two weeks ago.  The olives are dropping their leaves; they never do that at this time of year; I don’t think they are badly damaged but it was obviously a shock to them.  The Carob tree that was badly damaged last year but that made shorts from the ground (it had been a large lolly pop) looks dead again; I think I will remove it and plant something that will survive these brutal temperatures because it would be even worse if it grew for a few years and then was hit again when we have another cold winter.  The Oleanders are also looking very miserable, and will need to be cut back significantly, a shame as last summer that made a good statement on the slope.

The plants that have tossed off the cold spell are, of course, the bulbs.  The first Hyacinths that had pushed through the snow to flower had damaged stems and so didn’t survive but the rest that have opened since are making the strongest statement in the garden.  Producing a very pleasant perfume as I walk past them but not over powering as they would be in the house.

Let’s start our walk by the Pomegranate, on the east side of the terrace.

Anemones and Iberis sempervirens under the Pomegranate

Moving clockwise around the garden, this is the Left hand border.

Further along the pinks give way to the blues. 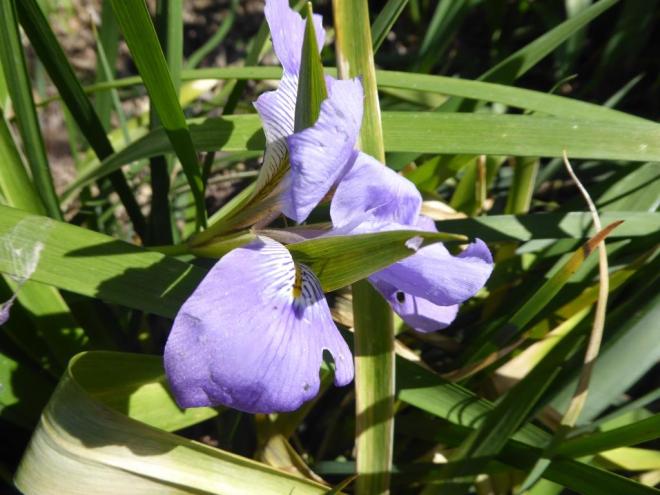 Muscari and Euphorbia rigida in the smaller island.

We finish by the west facing terrace with yet more Hyacinths.

I haven’t really valued Hyacinths so much in past years and this is only the second year when there have been any except in the Crimson border.  Being larger than most other bulbs I can actually see them well from the windows of the house making an invitation to go out and look that them.

Do you grow Hyacinths; what is making a statement in your garden now.

54 thoughts on “Flowering today in my garden”