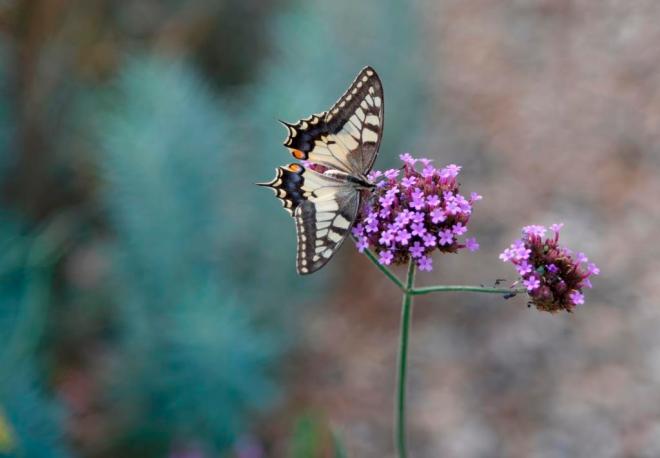 This is natural light, no flash

I thought I’d link with Flutter and Hum and her Wednesday Vignette, visit to see some interesting combinations and there aren’t always plants!

On Thursday I showed a small butterfly that I saw while taking images for my post about the Slope on Thursday.  From a quick look through my Collins Butterfly guide to Britain and Europe (why is it not just Europe, Britain is part of Europe isn’t it?) I had thought it was a Skipper. END_OF_DOCUMENT_TOKEN_TO_BE_REPLACED

Monday and Tuesday were perfect autumn days; perfect gardening days too!  Sunny, warm but not too hot it was a pleasure to be in the garden.  Wednesday afternoon brought sheet lightening, thunder and lots of rain which continued intermittently overnight and into the early morning.  There is a strong breeze too today making the drying leaves rustle on the trees.

I know that autumn is here even if I want to live in denial a little longer; I know because the days are becoming shorter but I know most because the shield bugs are coming into the house to find suitable hibernation sites, I carefully remove them, not daring to squash them because of the pungent, long-lasting odour they emit.  I’m sure that during summer they don’t produce the odour so it seems to be a way of protecting themselves while they are hiding.  Strangely I have the impression that very few survive the hibernation process as I find lots of darkly coloured ones dead.  There are many kinds of shield bug (aptly called smelly ones in Italian), the type that come into the house are, I think, Piezodorus lituratus or gorse shield bug; the name obviously references the bad smell they emit. END_OF_DOCUMENT_TOKEN_TO_BE_REPLACED

Monday was a lovely day in the garden, the sky had scudding clouds and it was windy, for some reason the butterflies thought it a perfect day and fluttered about every time I passed any of the plants they were feeding from.  The wind, of course, made it challenging to photograph them, but here are a few I managed to capture. 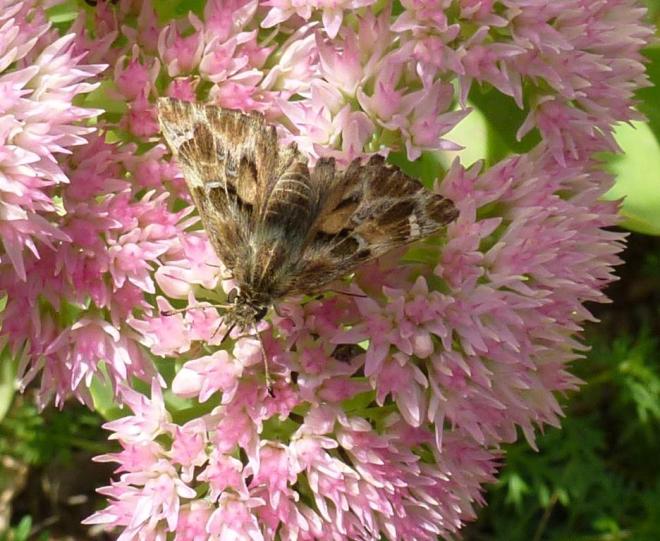 This moth was flying by day, not sure what it is on this Sedum

Either a long or Lang’s short-tailed blue (you’d think it would be easy to tell them apart!

This one definately looks like it has long tails!  Feeding on the newly flowering rosemary

The caterpillar of the Swallowtail butterfly likes fennel to feed on and to make its chrysalis.

The first picture was in the morning, by early evening it had climbed up to the fronds of the fennel where they usually make their chrysalis.

There was a Swallowtail flying around in the morning but it wouldn’t settle to be photographed.  I think it was confused as I have Brassicas in the same bed as the fennel, in fact they are now rather swamping the fennel so the butterfly could sense there was fennel somewhere about but couldn’t quite locate it.  Just shows it’s worth planting different smelling things together to confuse predators.  The fennel would have been more obvious when the eggs were laid of this caterpillar.

Not just butterflies – I found a stick insect on the wall, if they are on sticks they are usually invisible.

I’ve never seen so many Carpenter bees in the garden all at once as there were on Monday. This was alone feeding on Salvia

But there were dozens on the Perovskia 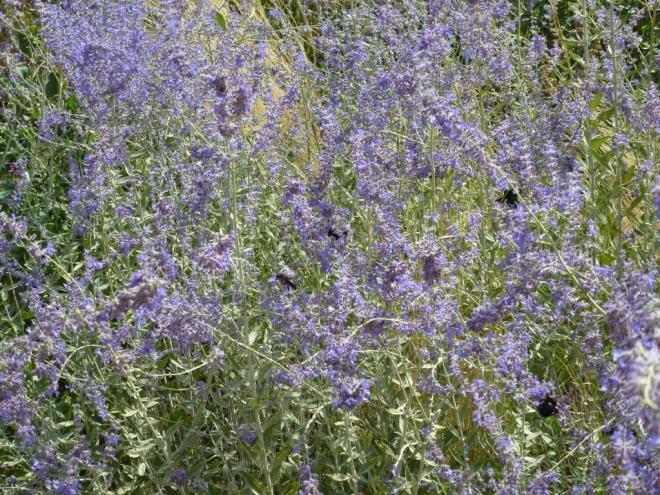 They look like shadows in the image, I hope you can see them.

Today I saw a butterfly I don’t remember ever seeing before.  It was happily feeding on Sedum flowers that are just opening now; it seemed unconcerned that it was sharing the nectar with several honey bees.

I think it is Lang’s Short-Tailed Blue,  Syntarucus pirthous.  Any better ideas please let me know!

The gardens is full of butterflies and bees.  They love the Lavender (this is a good reason to keep it).

I have seen Swallowtail butterflies, a black and white butterfly that comes rarely to the garden that I never manage to photograph and there was a mucher larger humming bird hawk moth, again it was too quick for me.  Even the bees tempt me because they seem slow only to fly off as the press the shutter; I have numerous images of only sprigs of lavender when I hoped I was taking bees or butterflies drink necter.

This honey bee is feeding on Thyme, a variety that smells of camphor.

A small bumble bee on lavender

I usually cut the flowers off the santolina before they open as I don’t like their colour, but having left them this year, I find they are visited by numerous different insects, so perhaps I should always leave the flowers for them. 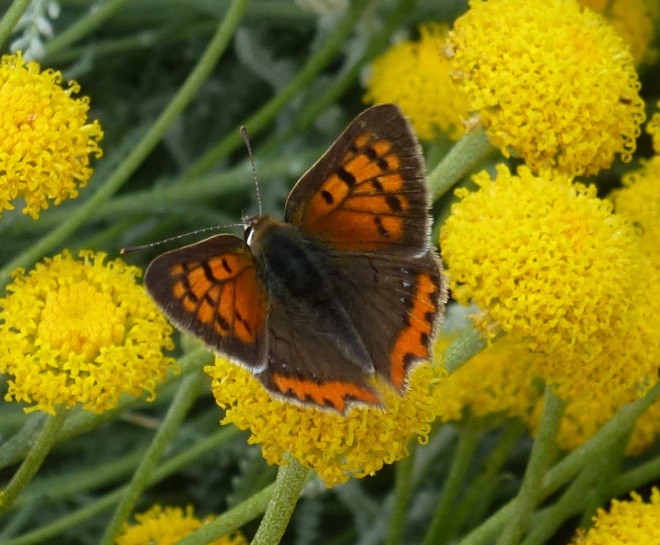 A spider sets its web where it knows there will be many passing visitors which it can ensnare. 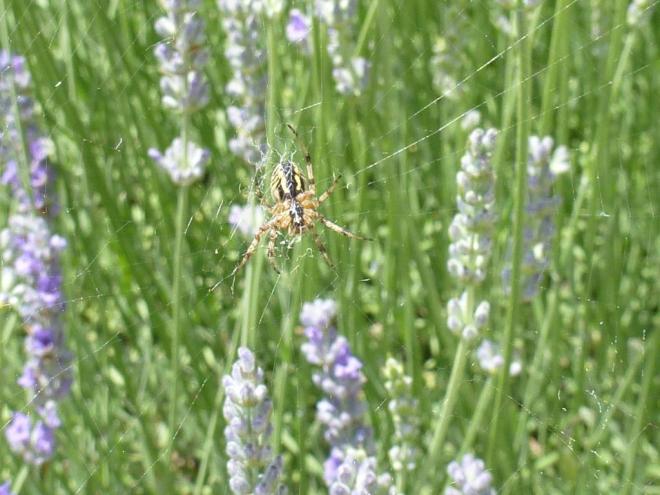 The spider is coloured like a wasp or bee. 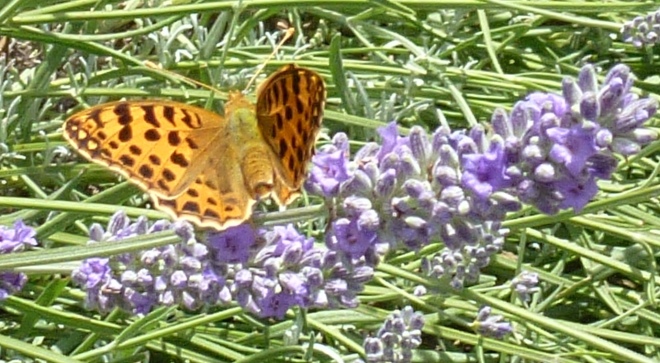 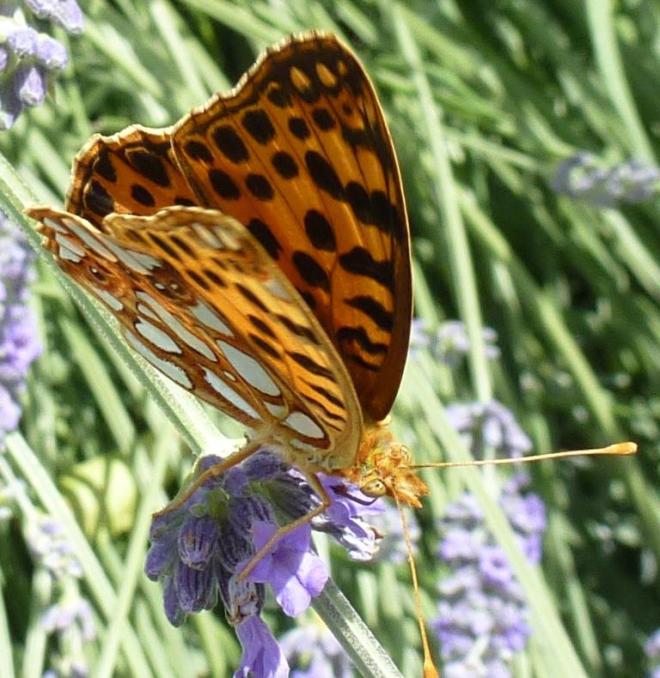 You can see blue markings on the underside of the wing.

This moth? is on a tomato leaf, I hope it’s not going to cause problems

And these are from last month that didn’t find their way into a post.

Verbena bonariensis is another popular flower for bees and butterflies 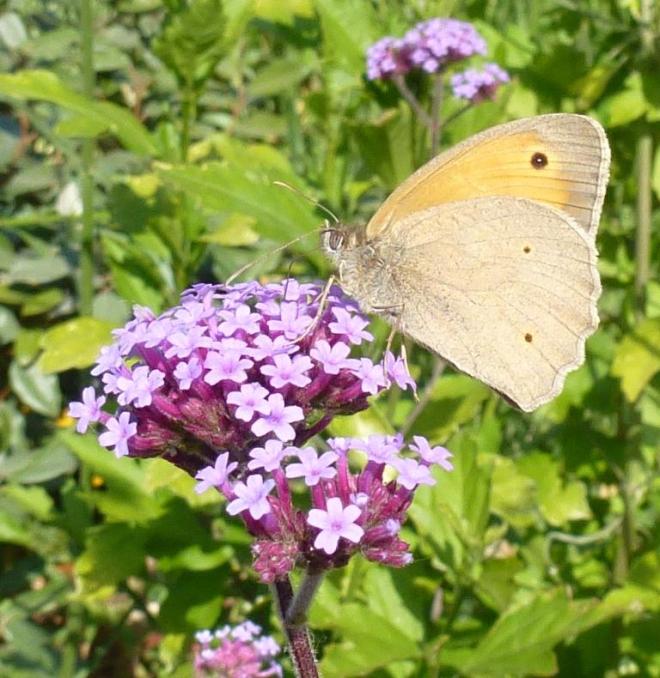 But not all the visitors are harmless.  Rosa Molineux has been ravaged by one kind of insect that I’ve not noticed in the garden in other years. 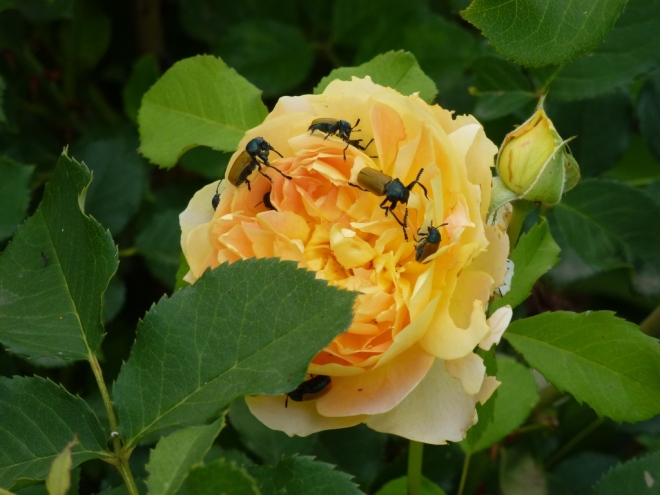 Any ideas as to what they are? 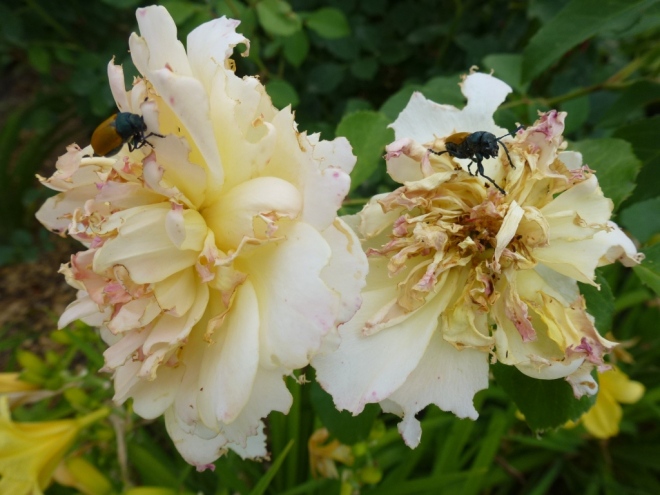 They eat the petals almost completely!

So if you know what they are, what can I do about them (organically).

I can’t leave you with this horrible image, so here’s a swallowtail from last month. 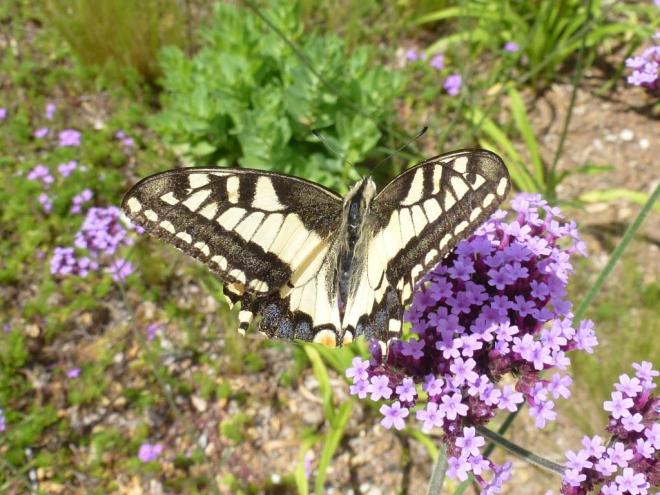 There are always a lot of this beasty

Wasps make their nests all over the garden 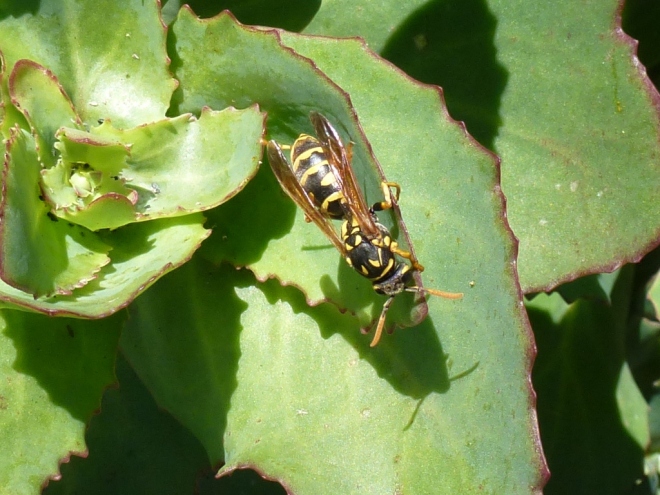 I used to be terrified of wasps but now, in the garden, I’m happy to see them – they eat aphids, here on Sedum, and butterfly eggs and cabbage white butterfly eggs and small caterpillars.  The sedums looked really sick, ants were milking the aphids until the wasps arrived to clean things up.

This green caterpillar’s days were numbered when I found it on a Heuchera bud. 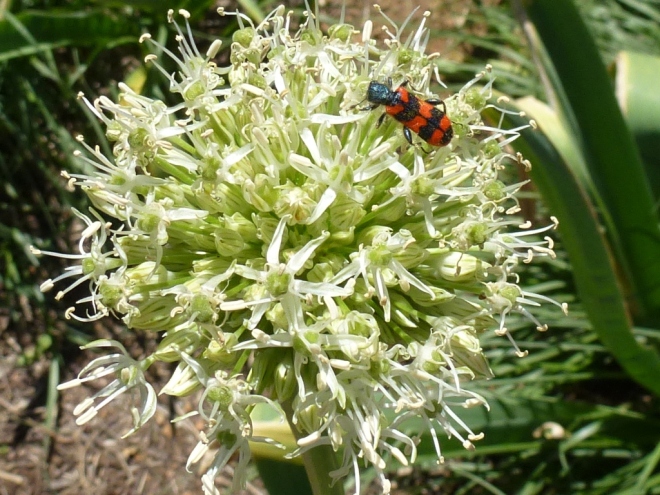 The stripy bug again, this time on Allium 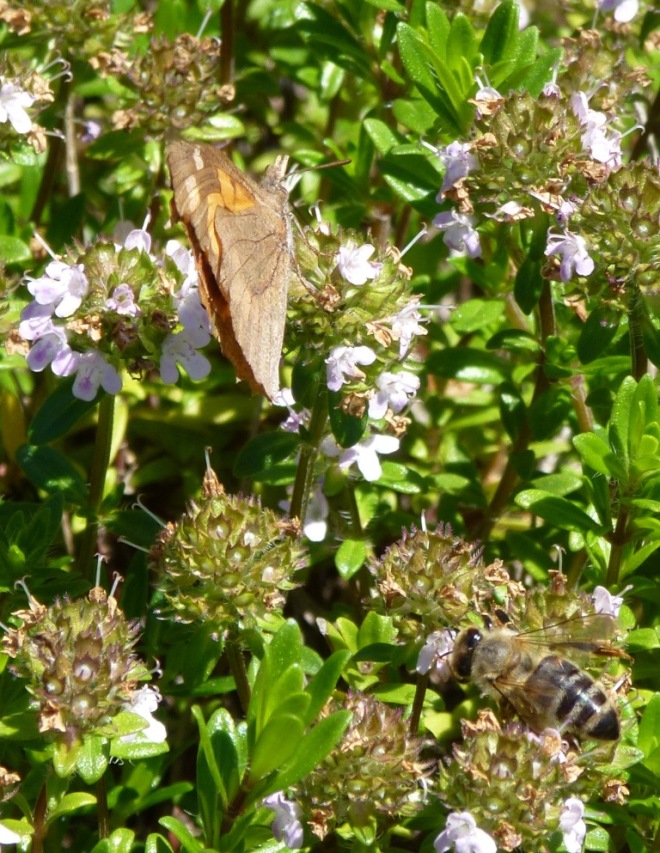 A pollen seeking fly? there were lots all on the same plant 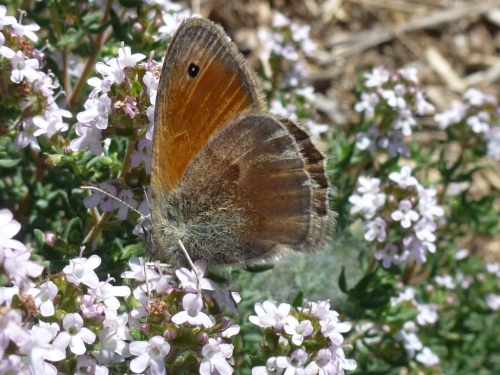 And there are always lizards who don’t usually wait around to be photographed! 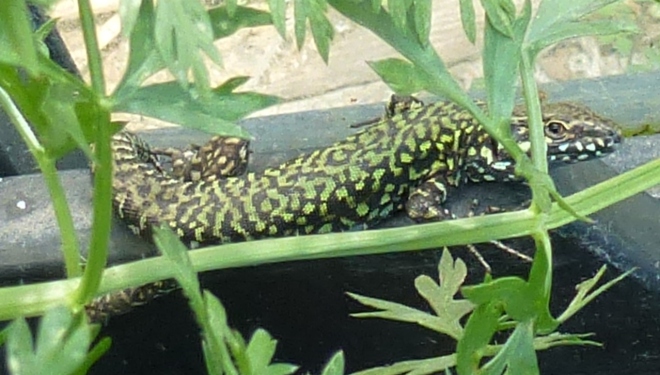 in the triangular rose bed

I read Donna@gardenseye view this morning about seeing a Red Admiral butterfly and this afternoon, on the other side of the world I saw one too!

First on the ground 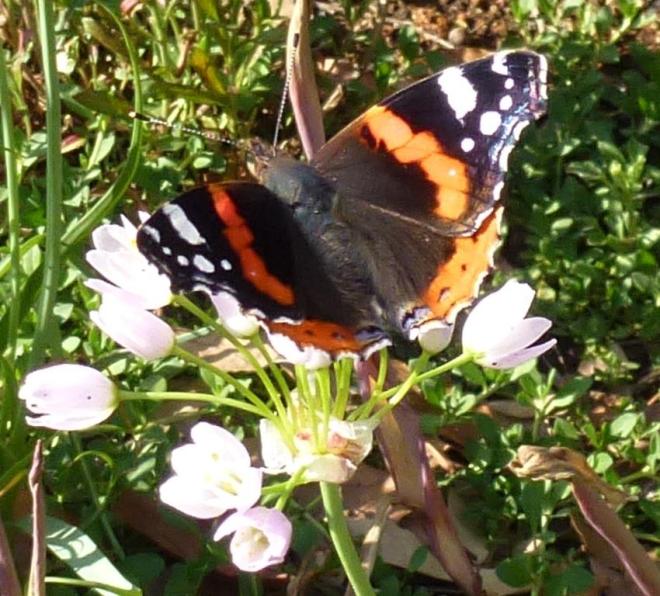 and then later on some Allium

I think this Iphiclides podalirius was drying itself after hatching.  The colours were so bright and fresh.  I don’t know why there’s called scarce as there are always more of these than actual swallowtails!

The end of April is like the end of May or even end of June in the UK.  Everything is coming into flower, every day when I walk around the garden I am surprised by some bloom I didn’t even see the bud of the previous day.

The tulips are no more – I’ll be writing a follow up post as to what happened to the rest of the tulips I was expecting to flower.

So this past week has been a week of firsts!  First roses, first irises, first strawberries, first hot still days with butterflies sipping the nectar of thyme flowers.

I have French Lavender planted at the base of most of the pillars around the terrace; it hasn’t really looked very happy and I have been pondering whether I should remove it and plant with something else; but I hadn’t thought of anything else so it was a pleasant surprise to see that this year it is looking lovely, sprawling out to give solidity to the pillar roses climbing above, another first. 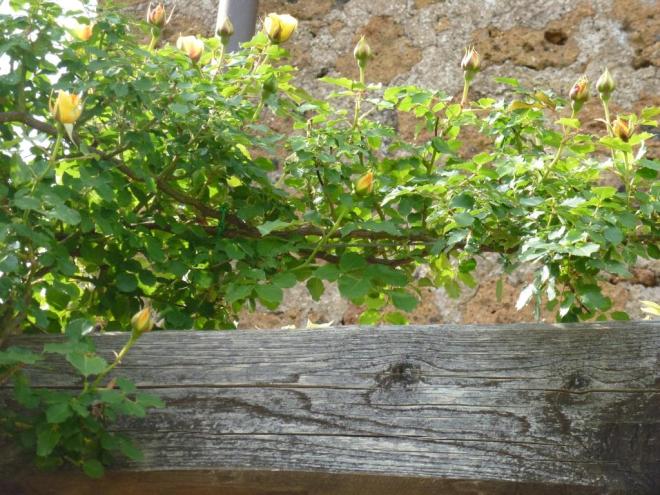 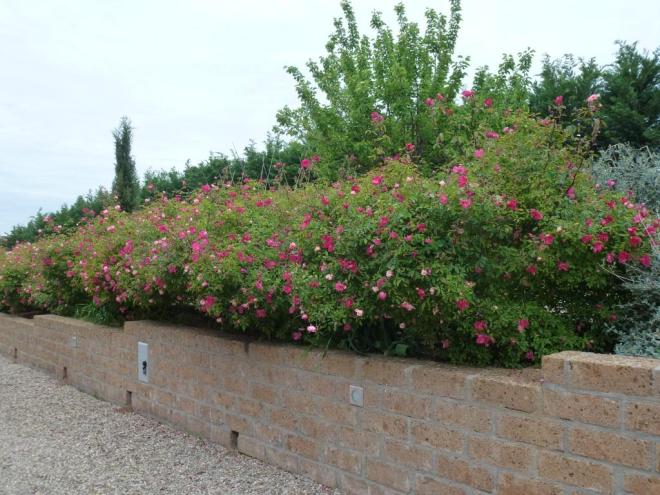 Rosa mutabilis is forming a real hedge for the first time and is full of flower.

I planted a banksia rose three years ago; it has struggled as it was planted into very poor soil (more or less into solid tuffo) with no irrigation but this year for the first time it has filled out and is covered in a profusion of pale yellow blooms. 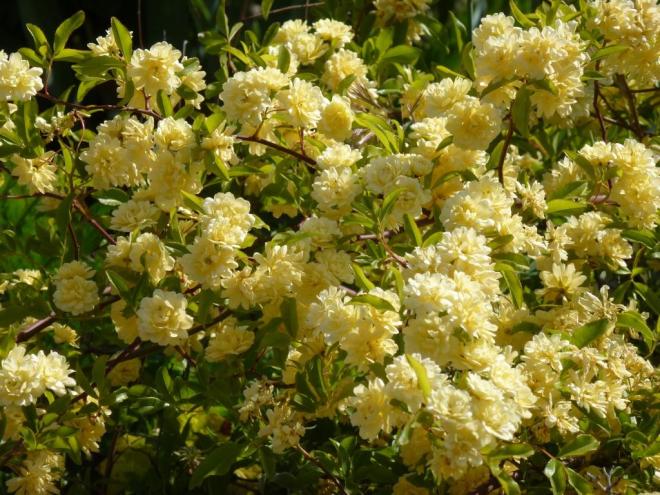 Some planting combinations that I planned last year, and moved plants around in the autumn are now producing the effects I hoped for. 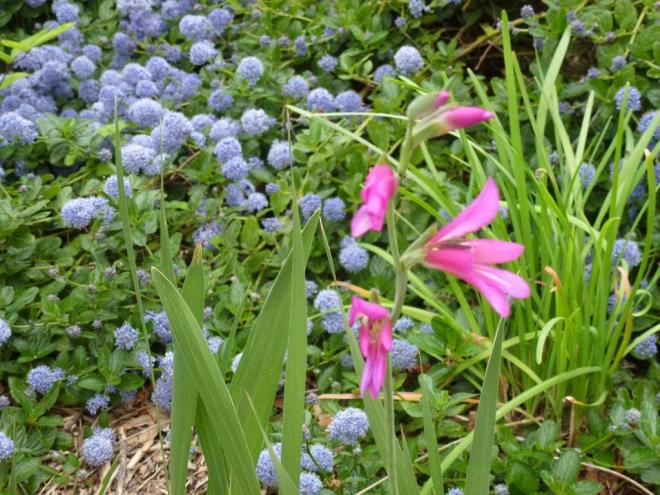 I planted more Gladioli bizantinus near a prostrate Ceonothus, I like the clashing combination of colours.

I moved Irises last autumn, Kent Pride to be close to the new growth of Nandino; I moved some Iris Jane Phillips near to Rosa Molineux and some to nearby the Ceonothus/Gladioli combination shown above.  After I wrote the post I was admonished by a friend who said that I was transplanting the Irises far too late and that it should be done in July; I am new to Iris growing so knew that I would just have to wait and see – all the irises I transplanted have thick buds or are already opening their fascinating flowers to reveal their ‘beards’.  I don’t think my friend was wrong, just that in Italy the growing season continues much longer into autumn (especially last autumn when it was warm until Christmas) so there was plenty of time for the tubers to settle and grow.  Most plants will die if transplanted in July, which is when I apparently should have moved them; probably Iris could be moved then because their tubers hold all the moisture they need for the summer anyway. 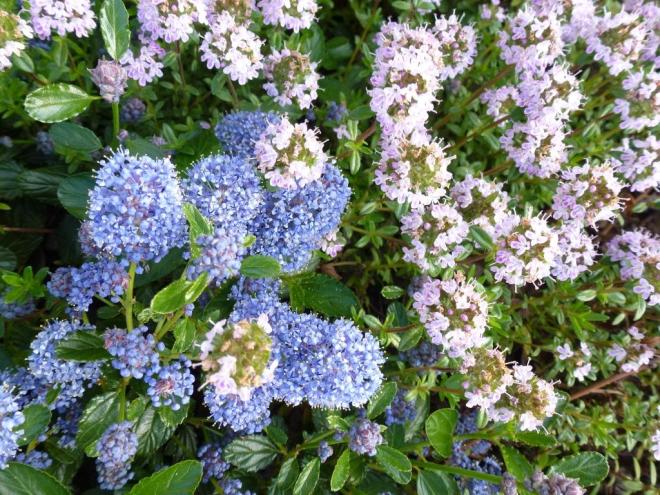 Ceonothus and Thyme growing satisfyingly together, a more subtle combination 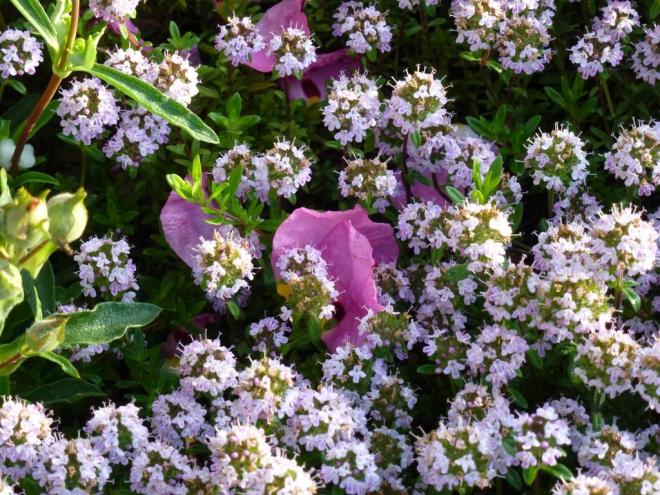 All the above combinations are to be found at the top of the drive border; this year this is filling out so that the shrubs are beginning to grow into each other, pushing out some of the more transient perennials. 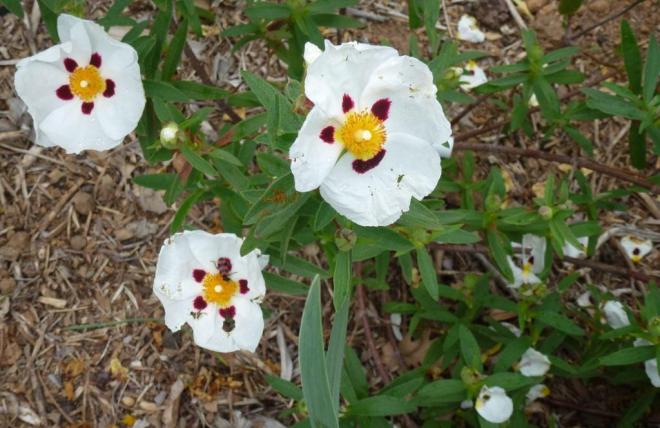 Some combinations are happy accidents; the above cistus was newly planted last autumn, I very much like how it reflects the colour of Iris ‘Kent Pride’ next to it.

It will be better still when the cistus grows and produces more flowers.

Many roses are flowering already but I’ll save those for another day,  There seem to be more buds than usual on the roses which could be due to the cold spell in the winter or that they are now more established.

Looking across the upper drive border out to the surrounding countryside

I’m joining Helen the Patient Gardener for her End of the Month View, do visit her to see what is happening in other gardens at the end of the April 2012.

Creating my own garden of the Hesperides
Blog at WordPress.com.