On the 26th January I wrote about my busy gardening week; but since then the weather has been anything but good so most of the work done has been in the greenhouse (report coming soon) rather than the garden.

Today, at last, there has been soon sunshine that had a little warm in it so I was able to prune most of the  mutabilis roses.  They had been pruned badly (by me) as a hedge between the drive and the vegetable garden.  To be brutally honest they are too large a rose for where I have planted them; add to this that they have been cut so as not to scratch the cars and to keep them back from the pathway in the vegetable garden – the result was crossed stems and new strong shoots beginning high up old stems.  I pruned all but three of the roses; I’ll show you what they look like when I’ve completed them all.  But suffice to say that the view of the onion bed is now very open!

I have another tulip that is not as described on the pack; one has reached flowering stage well before the others but instead of Daytona (White frilled) I have this….. 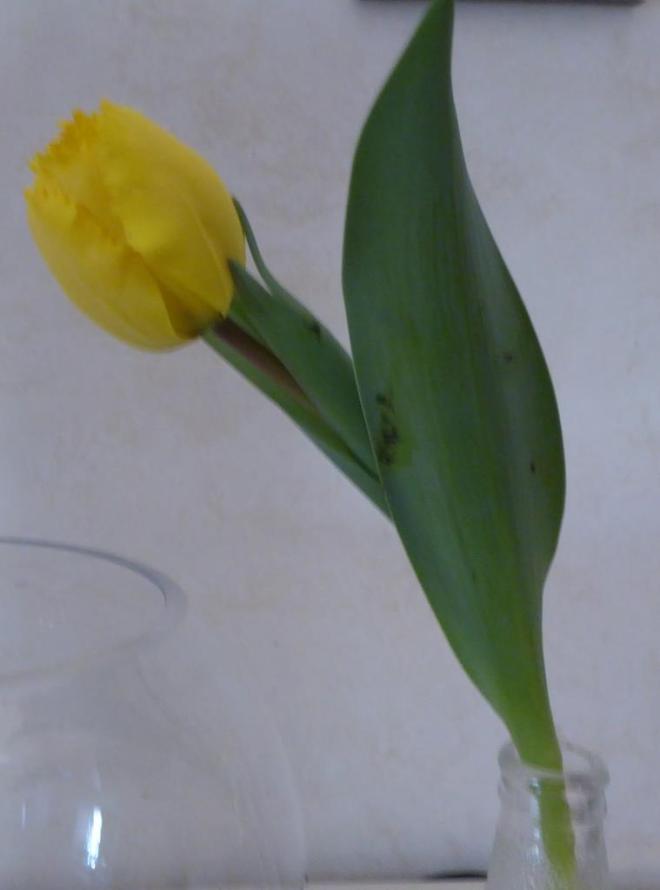 It is fringed as Daytona should be and is not unattractive but it is always disappointing when things aren’t what they should be. 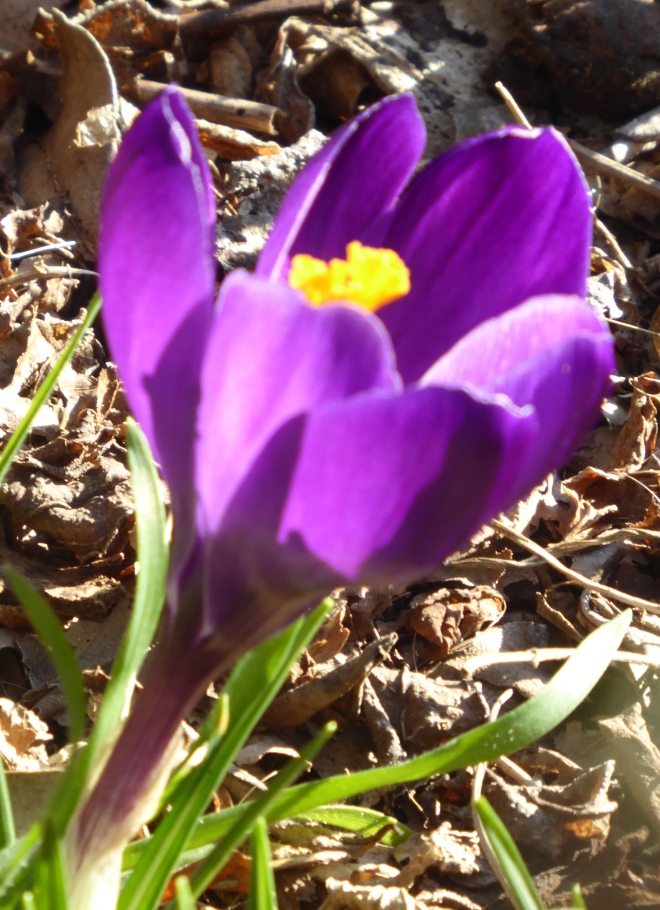 Crocus, the first of the deep purple

Crocus. this image was last week, the yellow crocus are all finished now. 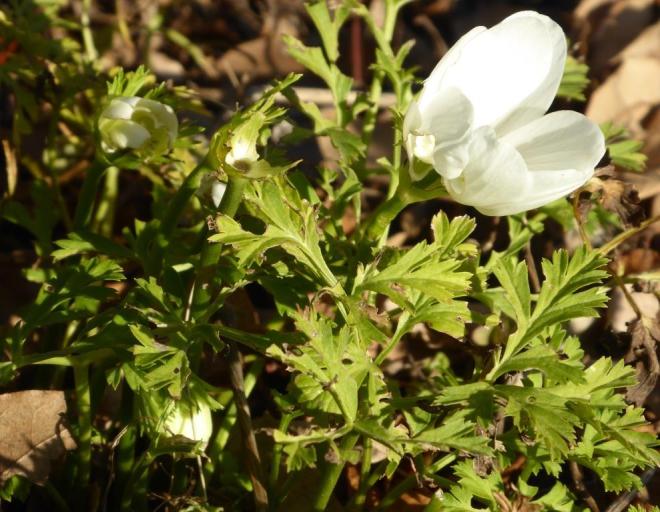 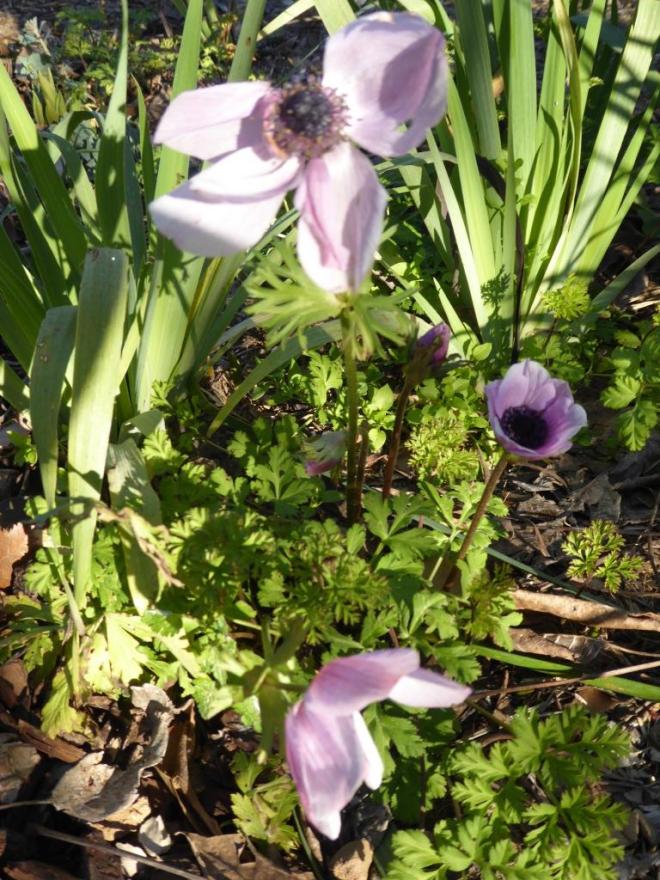 There are thousands of Grape hyacinths in the garden but this is the only one flowering. 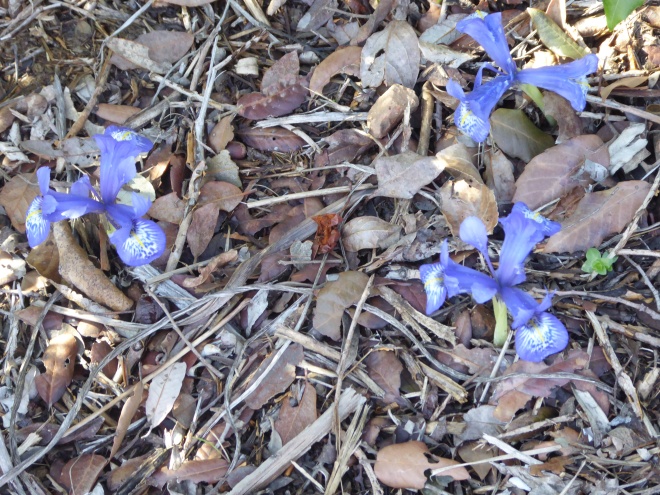 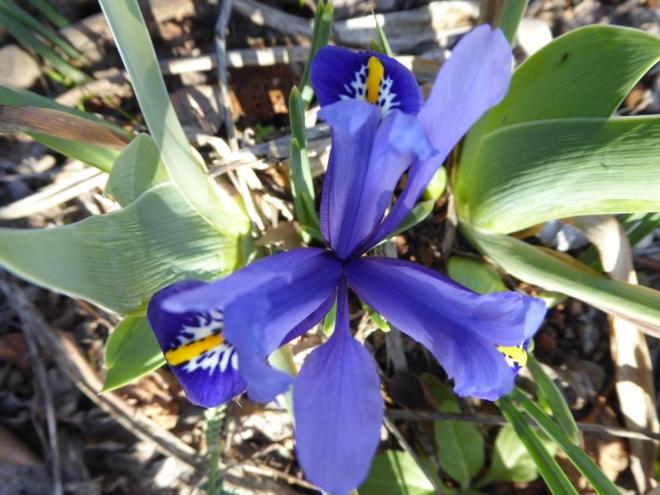 Hyacinth Miss Saigon, the first to flower in the garden 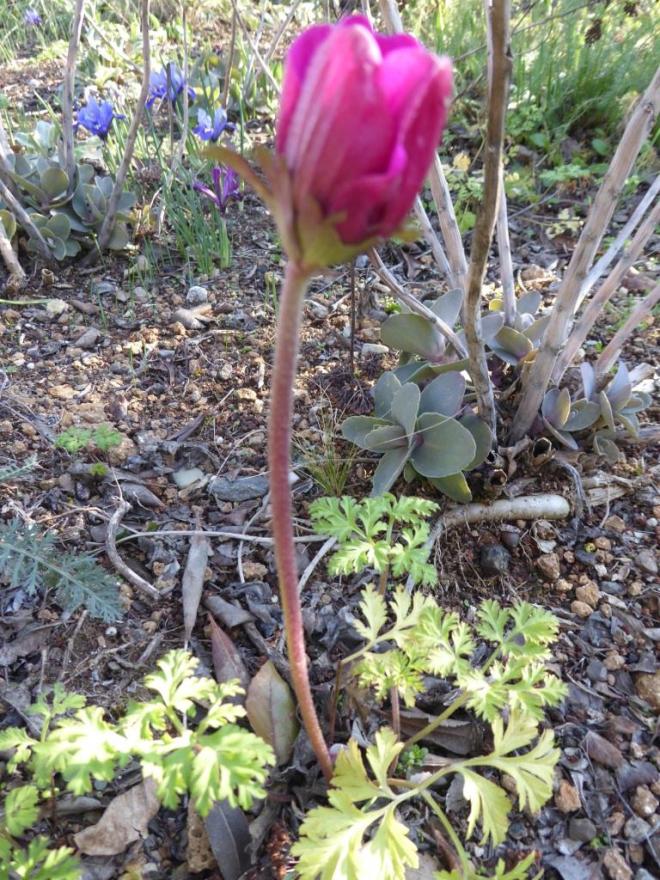 You can see last year’s Sedum stems need cutting back – I have done some of the many around the garden; those remaining are growing quickly which makes cutting the stems off low more difficult.

Sorry the name escapes me, something rosemariafolia

almost ripe seedpod from another snowdrop

When Chloris at The Blooming Garden writes her post for February flowers I’ll link to it.

I hope you are finding at least a few garden when you can get on with some work in the garden.

In contrast to the dull day yesterday, today is mild and sunny, the perfect day to be outside but I’m still a little unwell to work outside but the sunshine brightens my spirits even if I am indoors.  It was warm enough for a walk around the garden to check if there are any new shoots or promises of buds to open. END_OF_DOCUMENT_TOKEN_TO_BE_REPLACED 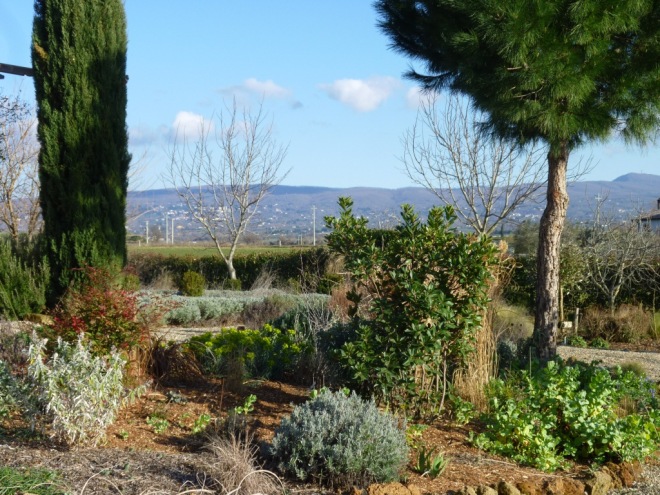 Looking across the garden in the evening sun

The day started wet and grey but during the morning, the clouds cleared and the sun came out.  As the rest of the week is forecast to be very cold I thought I would take advantage of the sun to plant the onion sets I bought back in December (it might even have been November!)  I hadn’t planted them before because last year when I planted early (ie when the sets come into my supplier’s shop), many rotted off in the cold wet weather we had last winter.  I also felt that as the winter weather is actually very similar temperature wise to Southern England, I would plant them at the same time I used to plant them when I lived there (which was usually February.  I’ve put the onions in the same bed as the garlic and shallots I planted in January.  As you can see the garlic have not pulled back into the soil see previous post to find out why they did this, but they seem to be growing well so my fingers are crossed that it’s not going to cause any problems.  Most of the shallots are still waiting for it to warm up a bit more but a few have begun to shoot.

A couple of the shallots are shooting

I have planted the onion sets quite close together mainly because there are so many.  I planted 500g of red and 500g of yellow Centurion F1 (I still have another bag of 500g of white).  The whites will have to go into another bed.  In the 1.2m (4ft) bed there are 6 rows.

Last week we finished moving the pile of compost/weed pile and the foundations were dug on Saturday, I now hope there won’t be too much rain before the concrete is poured – this week is probably going to be too cold to pour the concrete as it’s not good if it freezes.

I am getting very excited now that I can see just how big the green house will be, I’m mentally filling it with more and more plants.  I’m longing to be able to start some seeds; Janet from Plantalicious has very kindly posted me some Kautia.  It will make them doubly special that they are from a blogging friend.

With a very cold (at least at night) week forecast, the last thing I wanted to see was blossom on the apricot.  Last year there was a frost and strong winds just when it was flowering and setting fruit, resulting in just one apricot reaching maturity!  I am worried the same thing will happen again this year. Maybe I should have planted a peach instead, they always flower later!

A few Crocuses opened their flowers this weekend, a few days later than those of a friend in North Devon – interesting, I wonder why.  I think my daffodils flower later too, but as soon as its Tulip time mine are 2 -4 weeks ahead. There are lots of tulips pushing through now, so we pruned the Perovskia in the formal beds as it’s too difficult to get in and not tramp all over the emerging shoots if the job is left any longer.  The muscle used the hedge trimmer and did the job in about half an hour – but then it took ages to pick up the cut stems ready to be shredded for mulch.  We cleared two beds but the other two are waiting for our backs to feel better!

Cut but waiting to be cleared

The sunsets are still beautiful, I’ll leave you with one from last week.  Have a good gardening week. 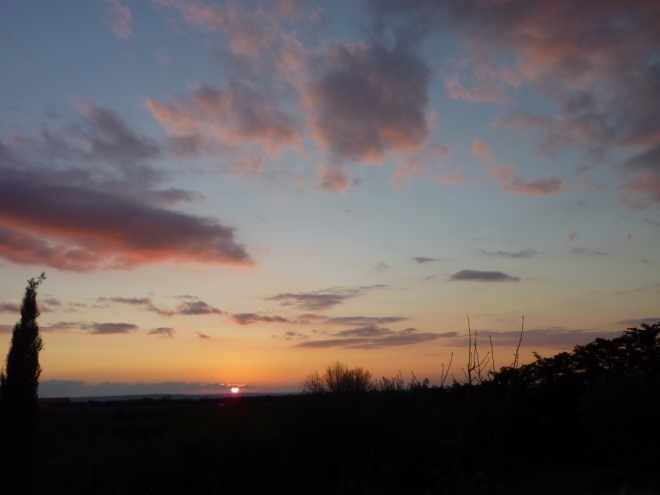