The title of this month’s GBFD post says it all really.  When I went into the garden to photograph foliage this morning I thought it might be difficult this month to take images that didn’t feature flowers rather than foliage.  But then as I walked around I was reminded why I had wanted to start GBFD; Foliage is EVERYTHING in a garden.  In some seasons it might be all there is, but when it is spring and the garden shouts with colour and tells me it is truly spring it is the foliage that makes the blooms sing in a harmonious way.

The garden is full of colour, maybe more colour than at any other time of year; yet without the foliage the garden would be nothing! 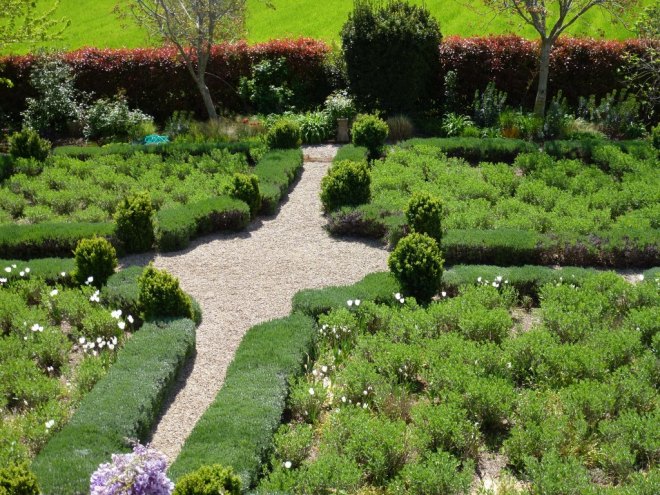 The structure of the formal garden works all year. Now supporting the white tulips in the front two beds

Structure, form and shades of green are enough to create a beautiful garden

Box needing to be pruned give a slightly wild feel; the pale green new foliage is too lovely for me to want to remove it

The slope is green in a different way; Stipa tenuissima waves in the wind

Silver foliage is a strong part of my Mediterranean garden, the bright spring light makes the silver leaves shimmer and also make a wonderful contrast to Tulip Negrita. 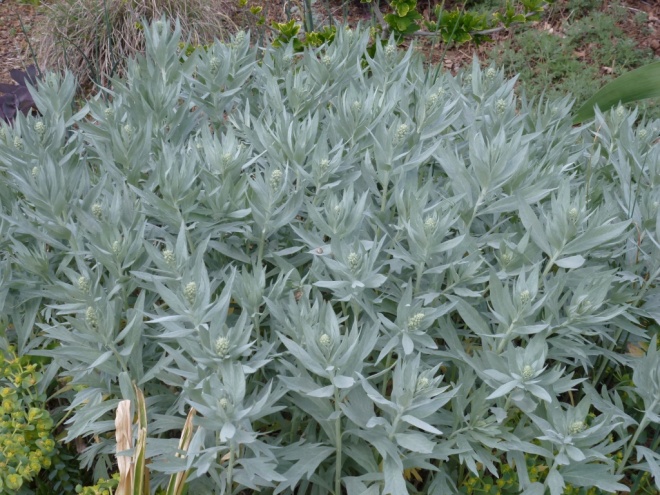 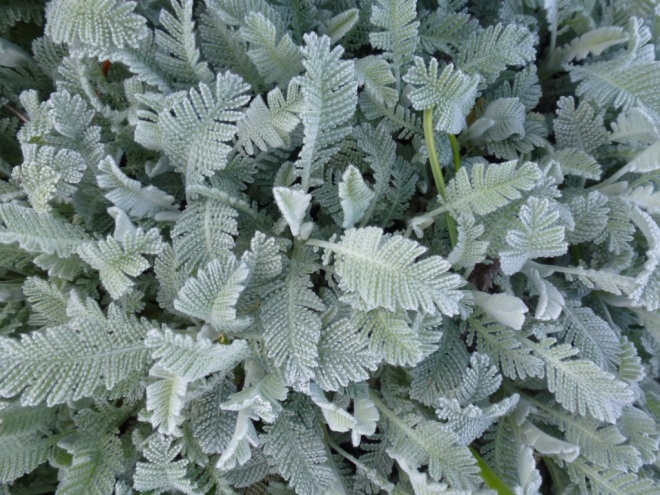 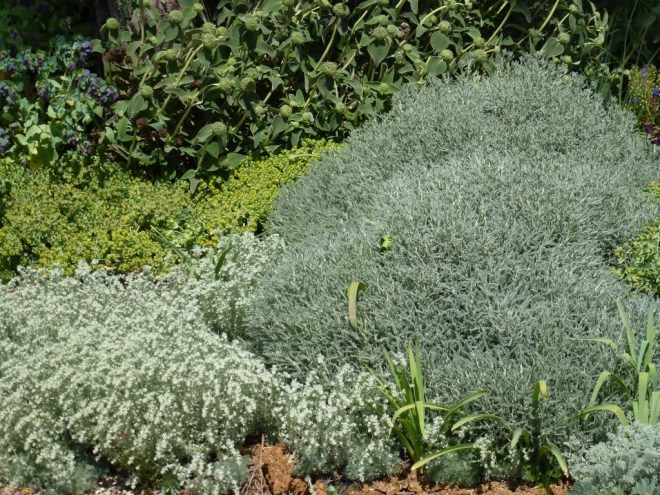 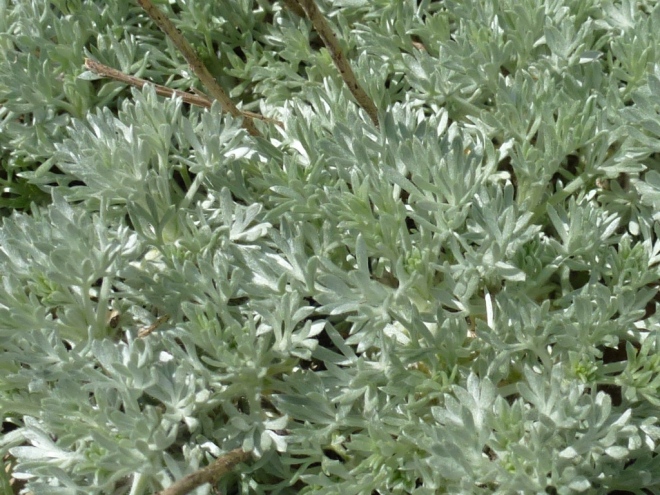 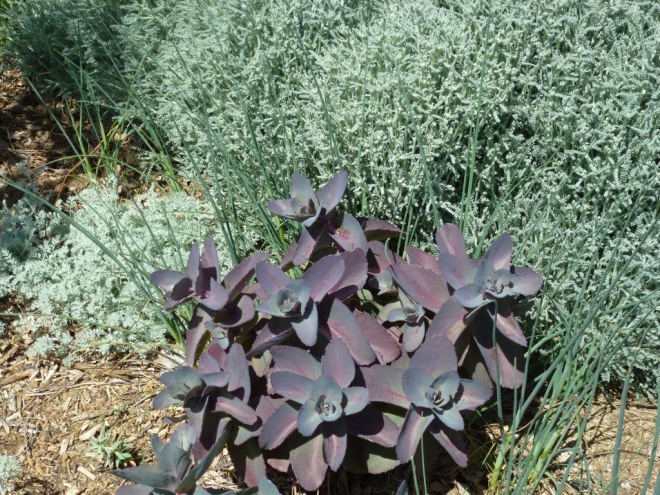 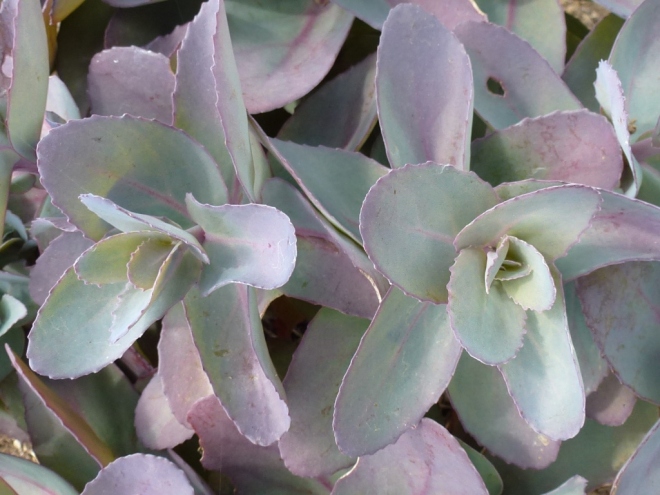 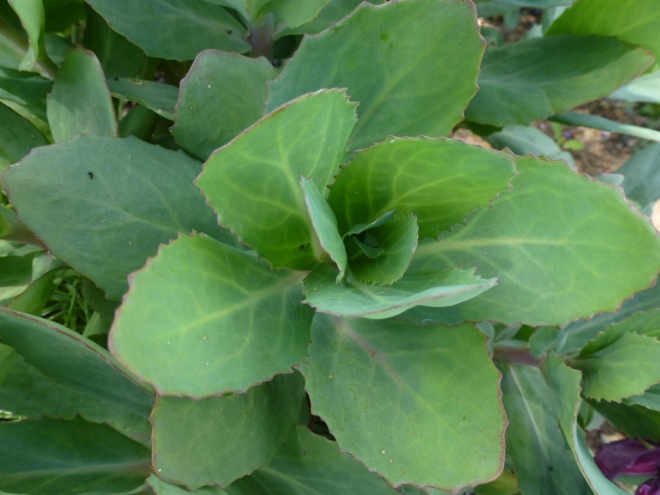 Remember sometimes to turn your images into tones of grey to help you understand the forms and texture that your plants are creating.

Some large round leaves would be a good addition here. 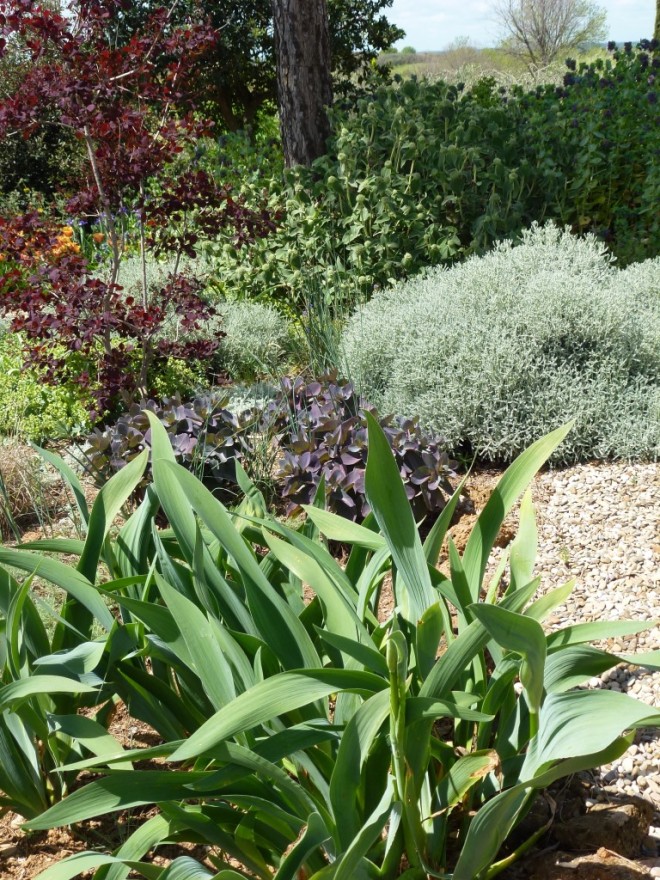 I think the form of the foliage here, works well with strappy Iris in the foreground, with Cotinus, santolina and Phlomis and a tall stand of Cerinthe in the background.

New foliage on a Mahonia

There is of course the pattern and colour you enjoy only when getting close.

A lot of new foliage is pink or red and not green.  I think this is just amazing

and the foliage of wild lupin is a wonderful pattern

Nandina domestica’s new foliage is as colourful as any flower

Hedges are very important for the form and texture they provide in the garden, the back of my garden Has Photinia, giving orangey-red new foliage which emphasises the colour of Tulips Brown Sugar and gives a good background to the rest of the garden always.

The large tree on the left is a White Mulberry

Please feel free to use GBFD in your own way; to maybe highlight one plant that is making an impact this month in your garden or to show the combinations that work for you.  Please post and add a link to your comment.  I really look forward to seeing what is happening in other gardens.  I hope you are enjoying spring as much as I am.

Another month has passed and it’s time again to join Helen the Patient Gardener for the end of month view; thanks for hosting again Helen

On Sunday last we had a little rain, enough to wet the ground.  Night-time temperatures have dropped a little; being able to sleep at night has made me feel a little better.

If the cooler nights continue, but already last night was warmer than Sunday night, the plants will benefit from some dew.  Lower temperatures are also promised for next week (I have everything crossed!).

The August issue of my Italian gardening magazine communicates that there hasn’t been a June and July together this hot and this dry since records began (and now there is a scorching August to add into the statistics); local friends, who are assiduous at keeping records of max. and min. temperatures and measuring rainfall, tell me that there has been no measurable rain since May 28th!  Again this morning we had a 15 minute shower – not enough to do much good but, for me psychologically good as it brings a promise that we will get some proper rain soon.

The extreme conditions are making me reassess my thoughts on what drought really is.  I’m sure this sounds silly – a drought is a drought is a drought.  But actually it isn’t just about there being no rain; we rarely get any rain here from July through to the end of August.  What has made the difference this year is the higher temperatures, just a few degrees higher every day and less obviously higher night time temperatures, giving plants less time to recover.  Then there have been even more strong winds this year; this morning’s shower wet the ground but then the wind grew stronger and everything was dry again within half an hour (at the most).  As I write the wind is blowing continuously, I can hear it in the chimney; I’m listening to the leaves of the wisteria rustling.  This desiccation by the wind is not to be underestimated.

I’m looking with reawakened interest at the plants that are really thriving, not just surviving; I will use more of them as structural plants so that when this hot summer is repeated in the future there will be more plants that I don’t have to worry about.  I mentioned some in my post about foliage; the good ones are rosemary, Ceanothus, Teucrium, Myrtle and Euphorbia, although a couple of plants have died but they were probably a bit old. 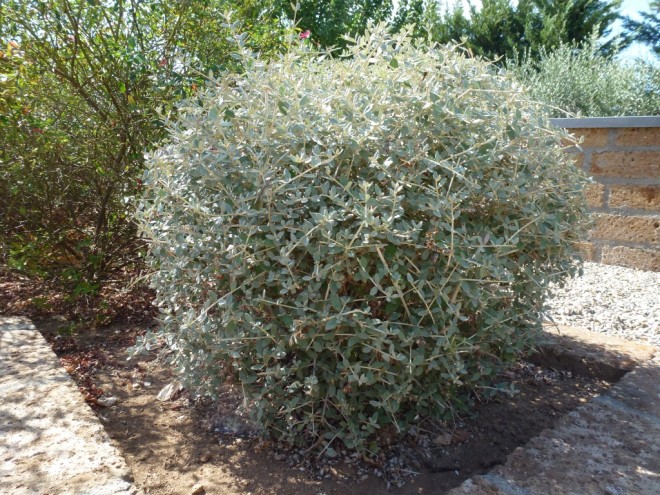 Teucrium, thrives in the heat, you can prune it – maybe I will replace the dead box with this, not as long lasting but tough!

Cistus and Pholmis sufruticosa are alive but their foliage has curled to protect itself so that don’t look wonderful.

Then there were the surprises – plants I would have bet good money that they would be OK; Festuca glauca is a plant I’ve always considered very, drought tolerant but several have died and there is such a build-up of dead thatch on others that they either need replacing or digging up and dividing, discarding the dead stems and hoping that they will reform into their usual round shape.

these three Festuca glauca look dead to me 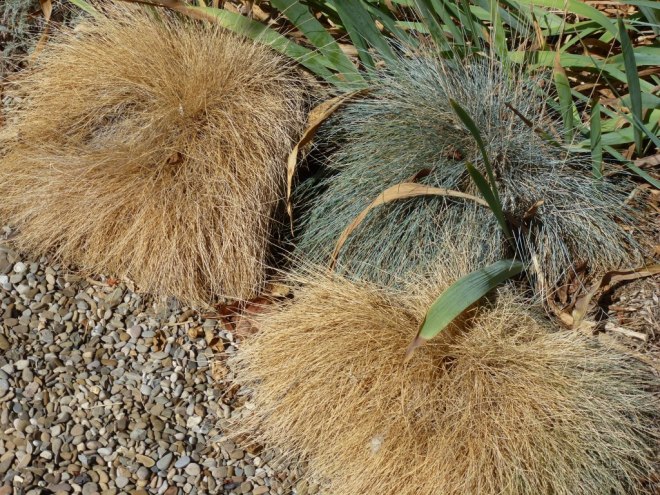 Nepeta is tough, just a couple of soakings with the hose and it is regrowing! I intend taking cutting and using more of this around the garden, I love its colour.

Most of the Sedums are growing well, although some are smaller this year.

I will use sedums as fillers around other plants, they needn’t be near irrigation drip hoses, I already took a lot of cutting earlier in the year, I’ll take even more next year 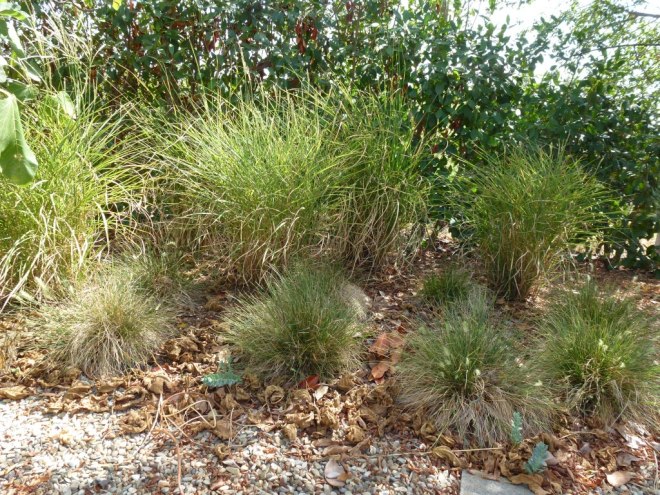 With irrigation (3 hours per week) the grasses look great 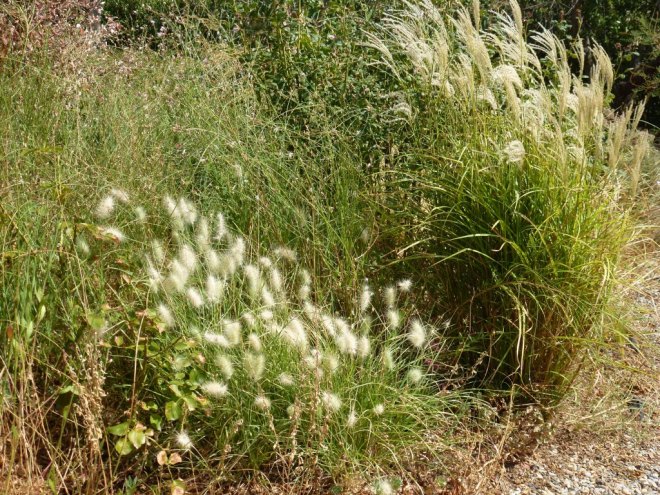 These grasses, Miscanthus and Pennisetum are on the edge of the circular rose bed, they are just receiving water through the soil, there is no direct irrigation to them but the roses receive 1 hour per night 3 times per week.

In my free-draining soil Gaura needs just a little water, the amount in the soil near the irrigated roses is enough, to flower for months. In some soils they need no water at all.

There is a very obvious truth behind all the above.  If I want a garden full of flowers in July and August all I have to do is use masses of water!  I don’t want, or indeed feel it is right, to irrigate the whole garden so I must rethink some areas so that I am not forced to go around with a hose early morning or late at night trying to keep plants alive.  Where the irrigation is, the plants survive on the amount I give them, they won’t flower in a very hot year like this one has proved to be but they will persist to flower another year and I think I have to be content with that. 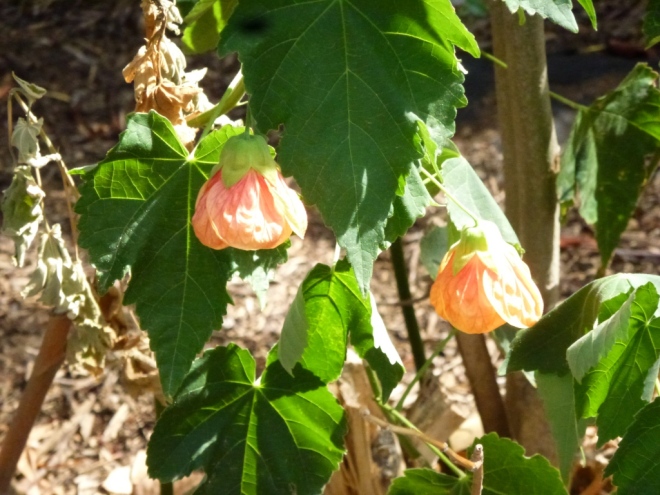 This double Hibiscus is still quite small, it was a cutting taken by a friend. Once established it is very tough and will survive with very little water 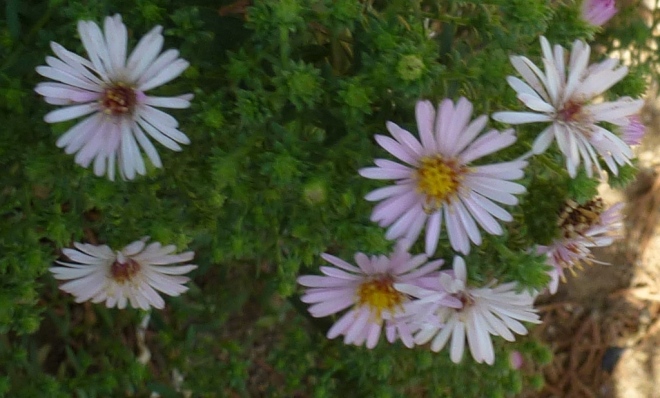 Asters need more water. I need to concentrate them in one or two areas where I’m prepapred to irrigate 3 times a week.

Sorry some of the images are a little fuzzy; the wind was blowing!

Suddenly the small island has burst into tones of gold.  Predominately the lovely gold comes from  Achellea millefolium.  There are many new plants that have self-seeded from my original planting. 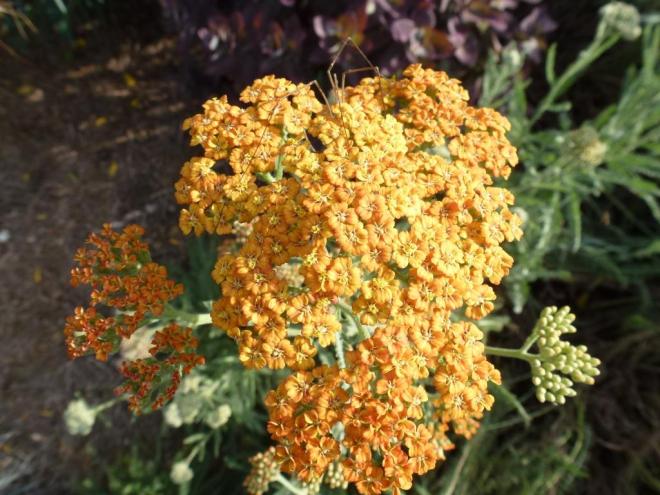 Can you see the hidden spider 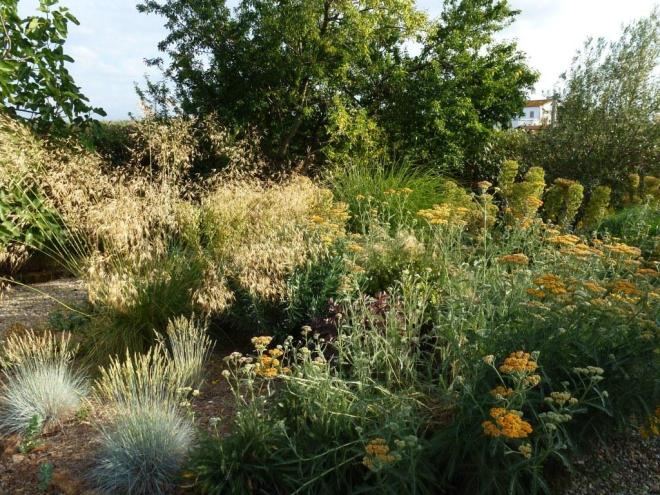 Festuca glauca is flowering, these were self-seeders I moved to the small island. 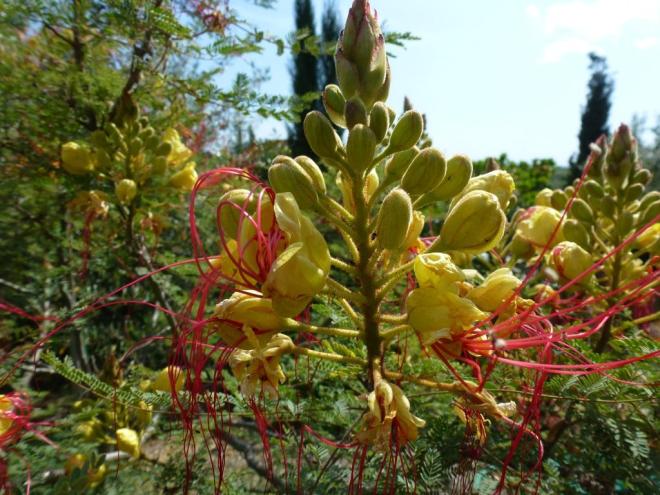