I’m joining in with Barbara and Christine with their What we’re harvesting today meme; it’s interesting because they are now approaching winter and in Italy we’re going slowly into summer.

There are some strawberries almost every day

The strawberries have slowed down considerably since last month (am I really thinking “thank goodness”?)  There are some to eat most days and lots more flowers to give hopes of many more to come soon. 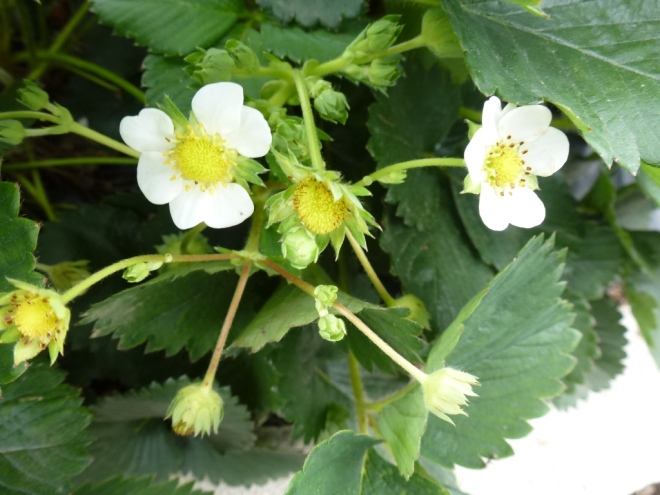 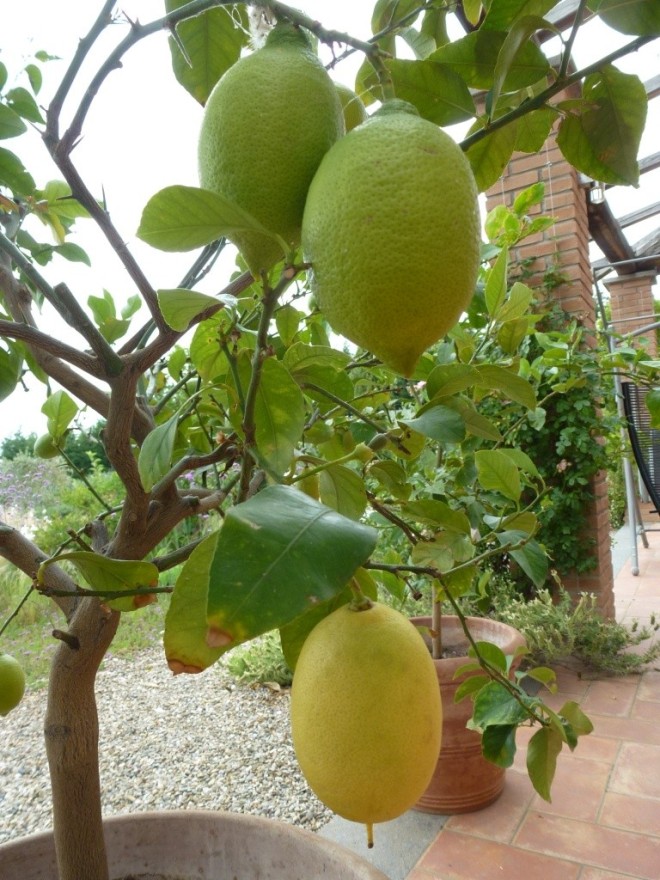 Having our own lemons is a treat

This year I decided not to buy grafted pepper plants and I am sure that this year the peppers will in fact be ready earlier.  If I wanted green peppers there are already a couple that are large enough to use.

Not actually harvesting peppers yet as I don’t usually eat them while they’re still green, except in Gazpacho, but I don’t have the other ingredients yet.

Not actually harvesting peppers yet as I don’t usually eat them while they’re still green, except in Gazpacho

The vegetable garden is already quite productive.  The greenhouse enables me to buy in small plug plants of many things early and grow them on, so that when I plant them out they are already good sized plants.  The tomatoes in the greenhouse have mostly already reached the top of their canes and those outside are well on the way to doing so too; the job of the moment is to keep them tied in and the side shoots pinched out.  When I plant the tomatoes I add an alkaline tablet to each planting hole to help prevent bottom rot.

The soil was, I think, a little acid for some of my herbs and vegetables as I’d used my own compost as top dressing and perhaps it needed a little longer to decompose.  Initially the basil was very yellow and it is only after watering with the heavily alkaline water from the well that it is now looking temptingly green and ready to use with tomatoes and very soon the first pesto sauce of the year.

The outdoor tomatoes are winning the race as to which will have the first ripe tomao to pick, this week, I think

The Basil was really yellow and sick looking but is now looking much better, I love using fresh basil with tomatoes and mozzarela de Buffalo

We have had rain all day today and when I went out to take these photographs it seemed that the sweetcorn had grown 10 cm during the day!  They are under-planted with melons, which are growing slowly, and Rainbow chard planted between them that will fill the space when the corn has been harvested (this inter-planting is also a sign that I am running out of space).

I can almost see the sweetcorn growing

I have already harvested quite a few of zucchini and the yellow variety that I grew from seed is just producing its first, rather weak-looking specimen.  I’ve used them in frittata, pasta sauce and in salad to replace cucumber which isn’t ready yet.  I like them cut very thinly into ribbons (like pappardelle) and served with an olive oil dressing. 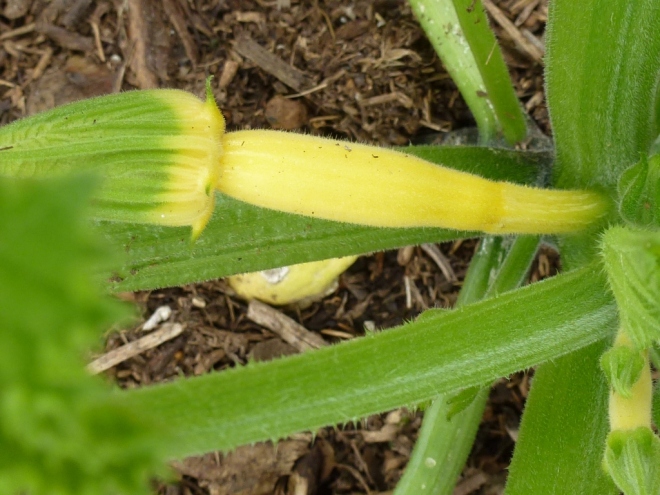 Onions and garlic are growing well and I have been using any of the onions that have tried to produce flowers and young fresh garlic is perfect for Spaghetti, aglio e olio e pepperoncino (spaghetti dressed with garlic, oil and chilli with a topping of some freshly grated Parmigiano reggiano. 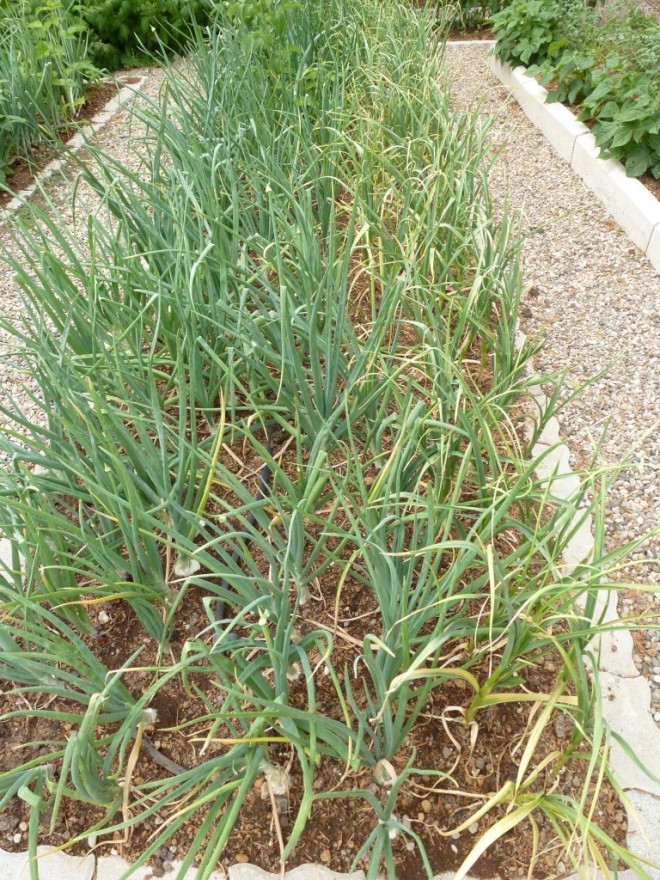 Garlic on the right and red onions on the left

There are various lettuces popped in around the plot, we’ve been eating them all through the winter

On the right misticanza, there is a lot of mustard leaves included, some would have been great but there is too much, on the left Barlotti beans are flowering now the cool weather has delayed their growth

Pak Choi has been a big success; it tastes delicious and grew from seed that I planted in April, I’ve been harvesting the outer leaves and leaving the rest to grow, I don’t know if this is standard practice but seems to work.

There is rocket around the garden that I add to salads and also Syrian thyme which adds a spicy edge.

I’m joining Helen at The Patient Gardener for her round-up of what’s happening in the greenhouse this month.

I posted about carrots grown in a pot in the greenhouse over winter here, we are now eating the crop and they are delicious.  I like carrots raw in salads and the purple ones I grew add an interesting colour. 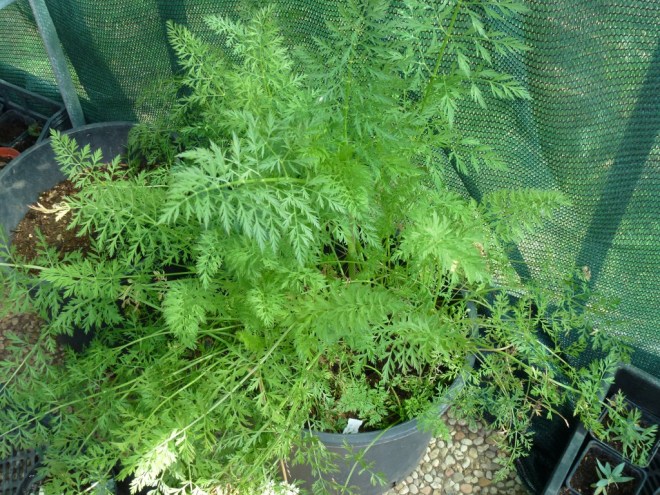 The tomatoes are growing well, I am continuing with the on-going task of tying them to their canes.  As last year most plants I am allowing to grow three stems and the rest of the other side shoots I’m removing.  I may later try the off-shoots as cuttings (as recommended by Bob Flowerdew) and plant them up to produce new plants later in the season.  I’m not very sure of the timing for doing these so it will all be trial and error, has anyone else tried it? 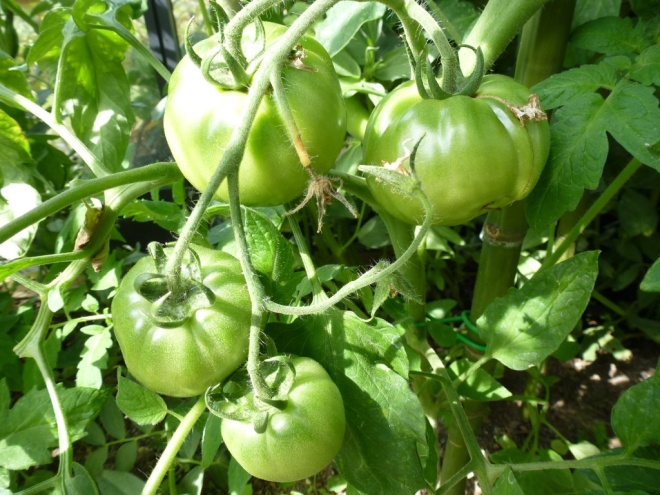 We have had salad lettuce all winter and there are still some to harvest.  I have planted 3 melons and 3 yellow peppers in the back border but I’m concerned as there is a lot of roots from the Laylandii that have obviously been attracted by the irrigation tubes so that the soil in this border isn’t going to be as rich and moist as I would have liked.  I think I will have to put a membrane of some kind to stop the roots and maybe make this a slightly raised bed. 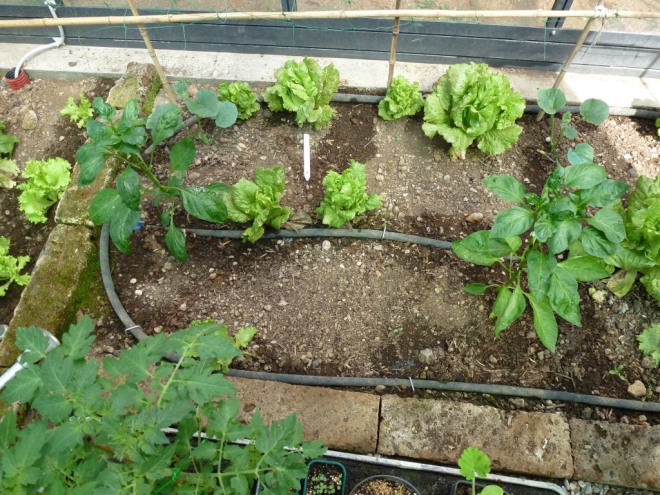 I germinated the seeds in the house as it was too hot for seed production.  There are some aquilegia from seed I collected from a plant in the garden and also some McKenna hybrids I bought.  The Achilea that germinated well are damping off; they were pricked out into my own compost which I fear is too rich for them, they need sharper drainage even at this stage.

I took sedum cuttings this week some leak and some stem cuttings (this site is great at explaining what you do), it is too soon to tell how well they will grow but I do remember my father taking leaf cuttings from a sedum plant of my great aunt and he was very successful.

A large empty pot contains Freesia corms that I’m very much hoping will grow to provide some perfumed cut flowers.

As soon as I put up the shade netting the temperatures dropped but even with the cold winds we are experiencing at the moment the temperature inside is comfortable warm.  I usually have the door open during the day and will soon, I hope, have it open at night too. 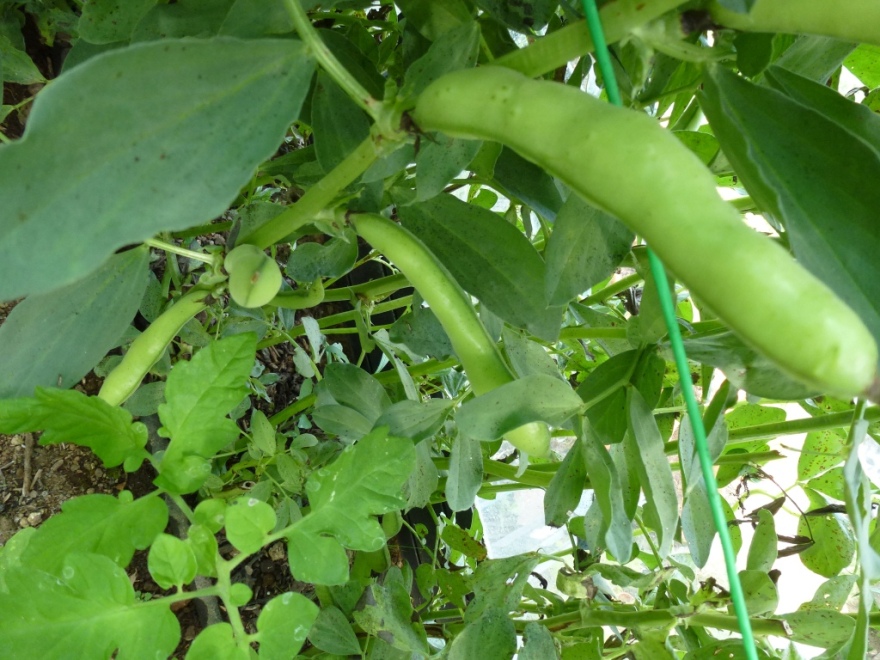 The broad beans I sowed in November are now cropping quite well. As I want the tomatoes to have more air and space I am harvesting by pulling up the whole plants. 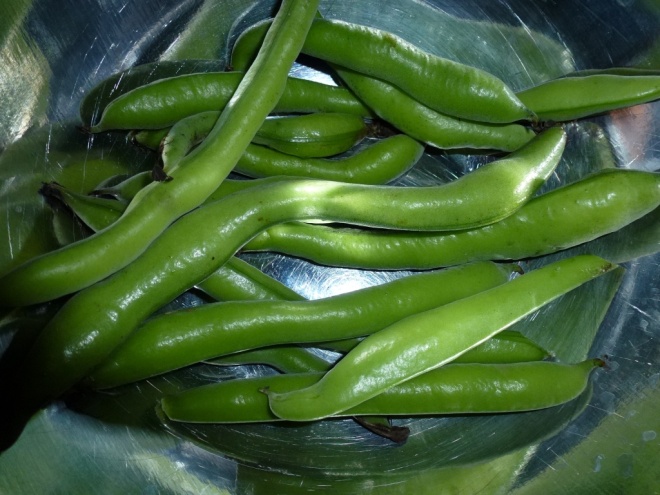 Rainbow chard waiting to be planted out

Beautiful vegetable foliage counts for Garden bloggers Foliage Day on the  22nd, just leave a link with your comments on the GBFD post.