Today has been cold and wet!  So cold I decided it was time to do ‘the change of wardrobe’.  I put away all the linen shirts and trousers and put cashmere jumpers into the draws and, (I can hardly believe this) I actually put one on and I’m not too hot.  The weather continues with its strangeness. END_OF_DOCUMENT_TOKEN_TO_BE_REPLACED

I thought I’d join Helen at Patient gardener this month with an update on the greenhouse.

The broad beans I planted in late November or early December have gown tall (maybe too tall) and have beans!  In March when the weather was much hotter than now I worried that no pollinators would live long enough in the heat to actually pollinate the flowers.  There must have been enough as the beans are forming quite low down so are presumably the first flowers from March.  My husband love broad beans (I’m not so keen) and he thinks my lack of success in the past is because I have been trying hard enough because I don’t want to eat them!  He likes them raw served pecorino cheese and salami, a classic antipasto in this area.  He also like them cooked in young tender pods and that really needs for them to be home-grown as the farmers want them to be bigger, so with tough pods. 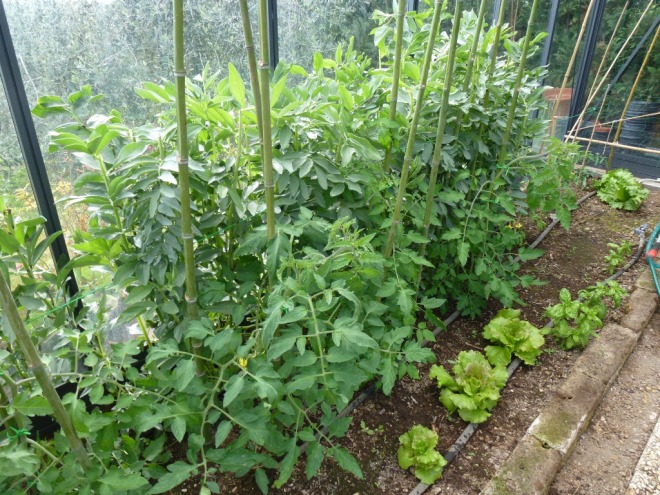 I am pleased with my experiment to grow carrots in a pot.  Again I sowed these in November I think.  I rather stupidly sowed them into my own compost without first letting the weed seed germinate so I am sure I disturbed and even weeded out some of the carrots.  They are certainly the best carrots I’ve ever grown as I’ve always had stony soil and that’s not good for any root vegetables.  I’ll post an image of the carrots when I pull some for the kitchen next week.

Seed production has been erratic.  I sowed various things before I went to England in March, I had the hot tray in the house but then at the last moment was worried it might start a fire so I switched it off.  When I returned, nothing had germinated so I moved the tray out into the greenhouse but this was a big mistake!  It was so hot during the day, the seeds all cooked I think.  Just a couple of Thai basil seedlings and 4 black climbing beans.  When it was cooler in March I persevered in the greenhouse but I am sure the vast difference between day and night-time temperatures was still not what the seeds needed.  So on Monday this week, I started again!  I bought the heat tray back onto a indoors windowsill and already I have climbing beans, sweet corn (lots of sweet corn) and rainbow chard germinated and a little more Thai Basil is slowly pushing up.  So result!  I don’t really want the seed trays inside so I will have to think of some other idea for next year. 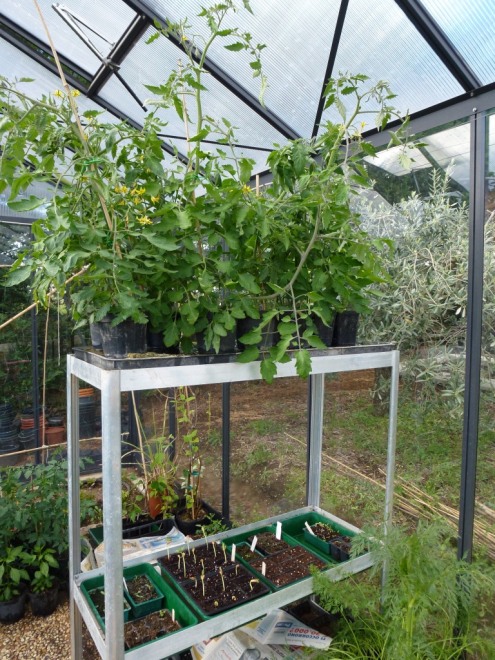 I bought most of the tomatoes as small plugs from my local supplier and potted them on.  They are now waiting to go outside.  I had planted outside at this time last year but this year is COLD!  We’ve even had a slight frost so they have to wait a little longer – it would be silly to lose them now.

Especially as one has fruit already!

These I grew from saved seed. They are small yellow pear-shaped and look lovely in roasted summer vegetables. They’ll soon catch up with the other plants. 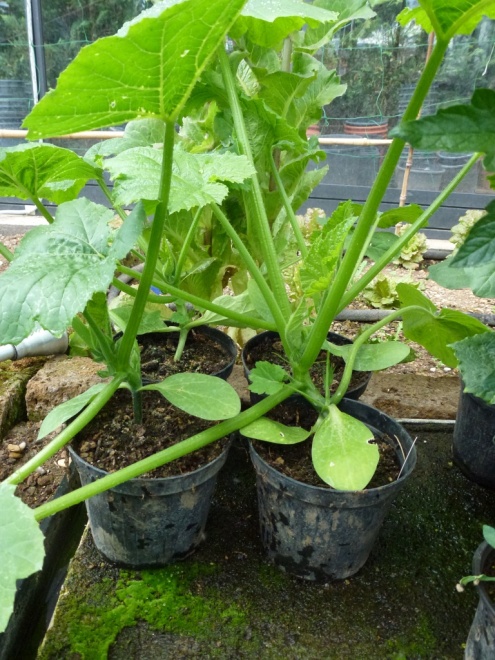 The zucchini are also getting very large; if they get to big they won’t transplant so well.

So I’m hoping for some warmer weather next week so that the greenhouse can be emptied of all the plants that need to be outside.

Don’t forget GBFoliageD on Sunday 22nd!  Share your beautiful spring/autumn foliage.  Is there a plant they you love for its foliage when most people grow it for flowers? Just do the post and leave a comment on mine.