Now that there are so many changes in the garden every time I walk around I think the time is right to begin regularly showing the same view (as last year) on Tuesdays.  Cathy at Words and Herbs (our host for this meme) will, I’m sure, also begin posting on a regular basis very soon. END_OF_DOCUMENT_TOKEN_TO_BE_REPLACED 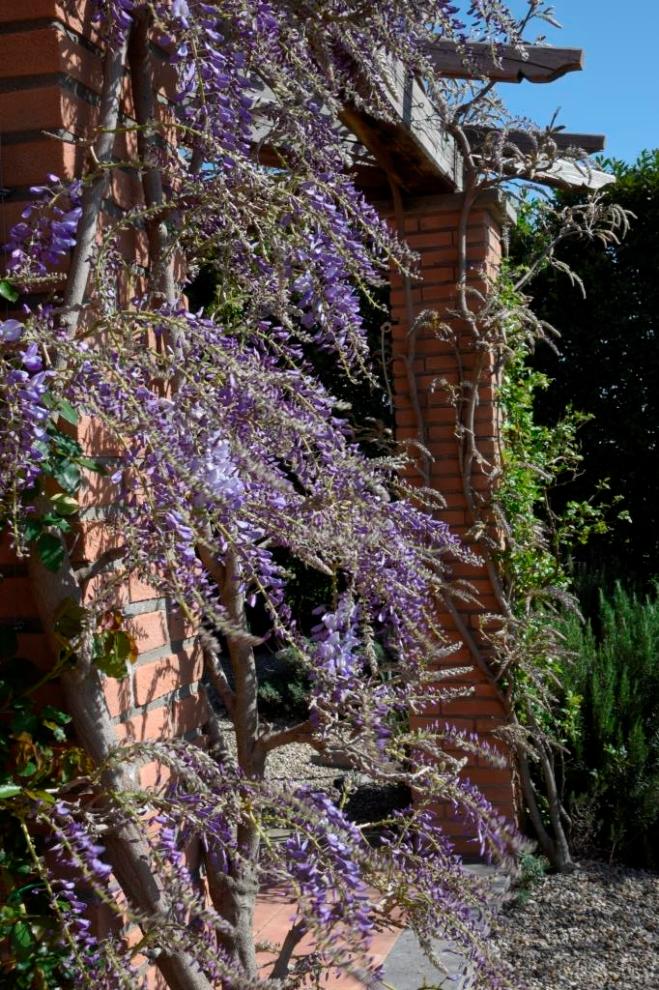 I love Wisteria; all my life for as long as I can remember I’ve wanted a Wisteria covered terrace.  I’ve never had the space for one although I have seen them grown as a standard, and pretty spectacular they are.

When we were looking for a house here in Italy we looked at one house that had a  30 metre terrace covered by an established wisteria that was creating perfect shade when we viewed the house in late June or July.  I was sold immediately.  I wanted that house!  I wanted that Wisteria!  But the house was very over-priced, it had serious problems of damp, of having all pipework for gas and electricity running in conduit on, rather than within the walls and there were some serious amounts of something eating the chestnut beams – there was also far too much land.  So it had to be NO.

This house didn’t have a pergola and its terrace had steps in it so one of our first projects was to build a flat tiled terrace with a pergola up which I could train a wisteria. 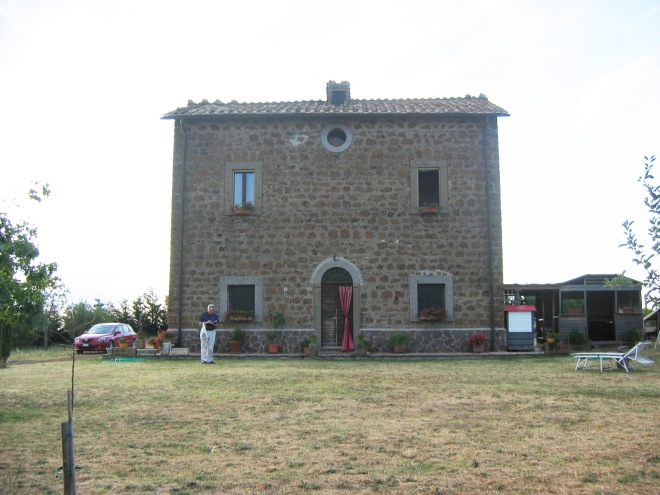 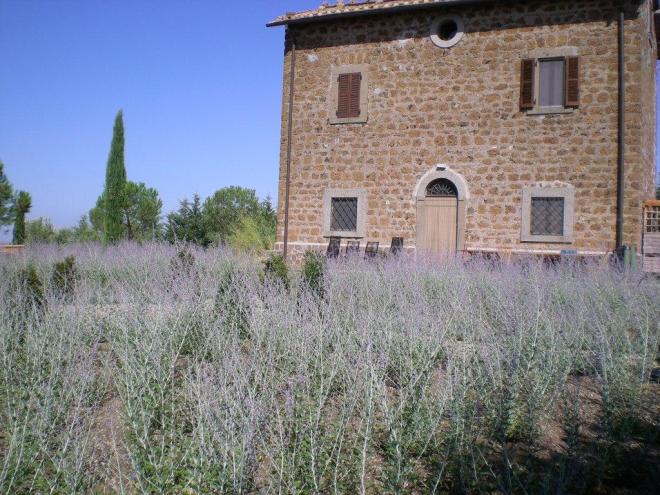 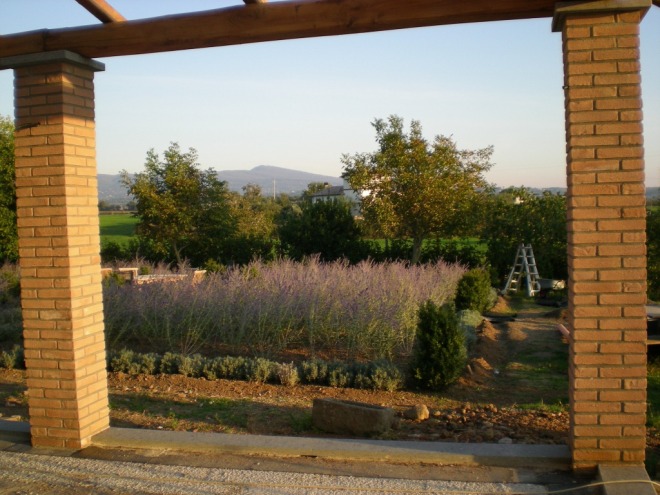 By October 2008 I had pillars to look between, creating a frame to the view

I planted a Wisteria ‘Prolific’ up each of the six pillars on the front, south-facing side of the house and waited with growing anticipation for the Wisteria to grow and fulfil my dreams of eating lunch shaded by the cool leaves or breathing in the heady fragrance as I sipped a glass of Proscecco!

The wisteria and yellow roses were planted in late October or early November 2008 but by April the following year 2009 they didn’t seem to have grown much; although the Tulips White Dream were certainly flowering much more than this year (2012).

There were some flowers to help my dream

The yellow roses performed well in May 2009 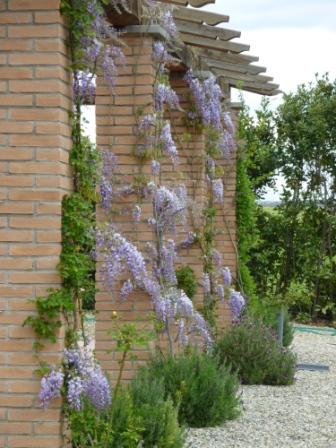 April 2010 and they are covering the pillars and beginning to sends shoots to cover the pergola.

April 2011, at last they are covering the beams and there are lots of flowers despite birds breaking off buds on the east end of the pergola 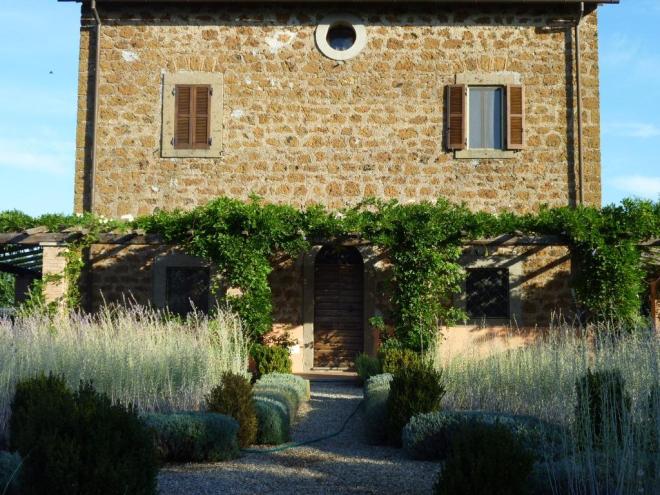 September 2011, you can see the wisteria is doing a fine job of creating shade

I have worked hard to create a structure of strong stems to cover the beams and wires so that hopefully in future it will always be relatively easy to cut back to this structure if it all becomes to overgrown.  Overgrown is, of course what I want for the summer so that there is always some shade to sit under and dream.

Looking down you can see the structure 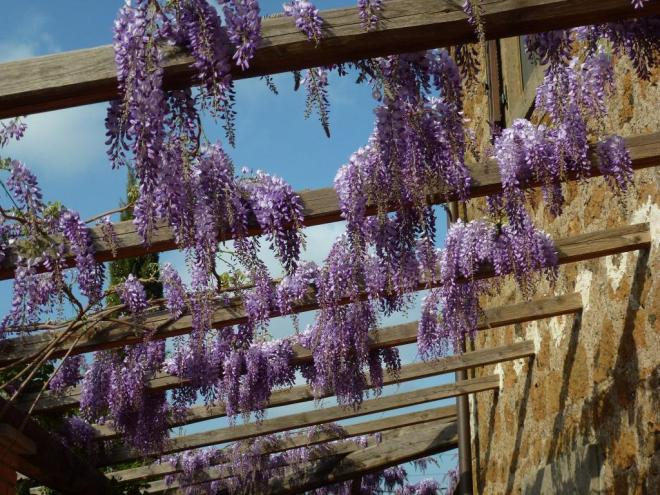 Every morning I go out and breath in the heady fragrance 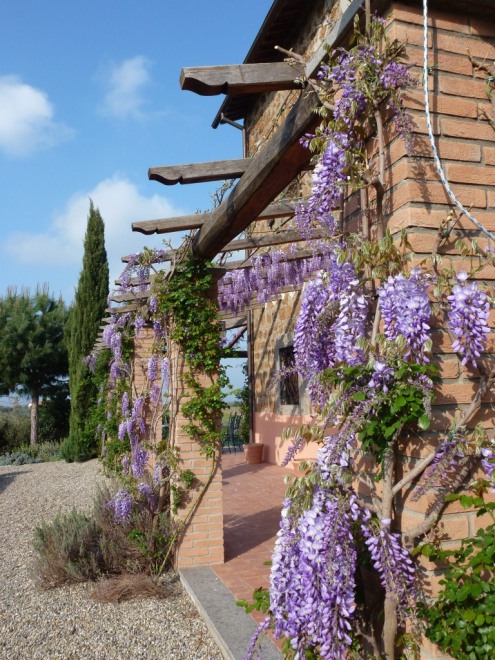 and my dream is coming true!