Welcome to Garden Bloggers’ Foliage Day (GBFD) when I ask you to consider the important role foliage has in all our gardens whether we put it first on the list when choosing new plants or whether it is incidental, the result of our choice of flowering plants.  I have reached a time in my gardening life when I admit that foliage is THE most important consideration when buying new plants, that and their suitability for my conditions and climate.

In November I introduced you to some of the evergreen trees and shrubs I’ve planted in the new beds, created when I removed the formal beds of Lavender, Perovskia and Box.  Today I’ll introduce you to two other trees/shrubs that have been planted in the back area of the garden; this was the Spring border or even more boringly named the back border – now renamed the woodland walk.

I want this area to provide good shade in summer when being out in the sun can be positively unpleasant for me and for many understory plants.  So here’s what is planted here:  More Arbutus, in the form of shrubs to trim and Pistacia lentiscus, these are typical Mediterranean plants that will not suffer during the long, hot, dry summers.  I have also included one Ceratonia siliqua  (Carob). 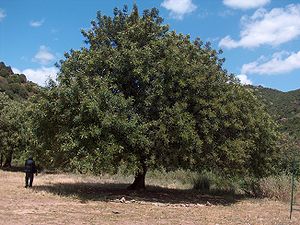 The image above courtesy of Wikipedia is a full grown example, mine will take a while to grow as large as this.

The Ceratonia silique tree grows up to 15 metres (49ft) tall. The crown is broad and semi-spherical, supported by a thick trunk with brown rough bark and sturdy branches. Leaves are 10 to 20 centimetres (3.9 to 7.9 in) long, alternate, pinnate, and may or may not have a terminal leaflet. It is frost-tolerant to roughly 20 degrees F.

Most carob trees are dioecious, some are hermaphrodite. The male trees don’t produce fruit.  The trees blossom in autumn. The flowers are small and numerous, spirally arranged along the inflorescence axis in catkin like racemes borne on spurs from old wood and even on the trunk, they are pollinated by both wind and insects.

Ceratonia siliqua (Carob), I failed to take and photographs of the flowers in autumn but here are the developing pods (hopefully)

The fruit is a legume (also known less accurately as a pod), that can be elongated, compressed, straight or curved, and thickened at the sutures. The pods take a full year to develop and ripen. The sweet ripe pods eventually fall to the ground and are eaten by various mammals, thereby dispersing the hard seed. The seeds contain leucodelphinidin, a colourless chemical compound.

The carob tree is native to the Mediterranean region.  The word ”carat”, a  unit of mass for gemstones and a unit of purity for gold alloys, was possibly derived from the Greek word kerátion literally meaning a small horn, and refers to the carob seed as a unit of weight.

The ripe, dried pod is often ground to carob powder, which is used to replace cocoa powder. Carob bars, an alternative to chocolate bars, are often available in health-food shops.

I have also included a couple of Quercus coccifera, these again will be maintained as large bushes.

Quercus coccifera, the kermes oak, is native to the Mediterranean region and Northern African Magreb.  The Kermes Oak was historically important as the food plant of the Kermes scale insect, from which a red dye called crimson was obtained.  The etymology of the specific name ‘coccifera’ is related to the production of red cochineal (crimson) dye and derived from Latin coccum which was from Greek κὀκκος, the kermes insect. The Latin-fera means ‘bearer’.

Quercus coccifera the leaves are similar to Quercus ilex

Elsewhere in the garden other foliage is doing its job of creating interest by its form, texture or change in colour.

If you would like to join GBFD this month just leave a link to and from this post, I look forward to seeing whatever you would like to share, just one beautiful leaf or a summary of all the foliage that is pleasing you in your garden. Christina

61 thoughts on “GBFD – January when foliage counts even more”