Time rushes on as it always does; crops come and finish and I haven’t written about what we’re eating for a while.

Broad beans and peas produced a decent crop, all I really want is some nice fresh vegetables that are different from the ones we’ve been eating; there were enough to freeze a couple of kilograms to add to soups and sauces.  I picked peas to eat fresh, but there were always more than we needed so these were frozen and I added to their bags on every occasion that I picked.

I don’t actually like broad beans at all, but my husband loves them; he likes to eat them raw with Pecorino cheese (a favourite in this sheep’s milk cheese area) and picked small and cooked with the pods.  The only way I’ll eat them is as a topping for bruschetta.

In the foreground to the right , Chard and to the left Syrian thyme, behind in the next bed, butternut squash, and beyond them sage

The salad crops are continuing partly because of the cooler weather.  Some lettuces have bolted, rather than waste them I stir fried the leaves very quickly with garlic, chilli and ginger and served it as a side dish, some I steamed quickly and pureed, a lot of vegetables are surprisingly good pureed in this way; there’s a reason it is done on MasterChef! 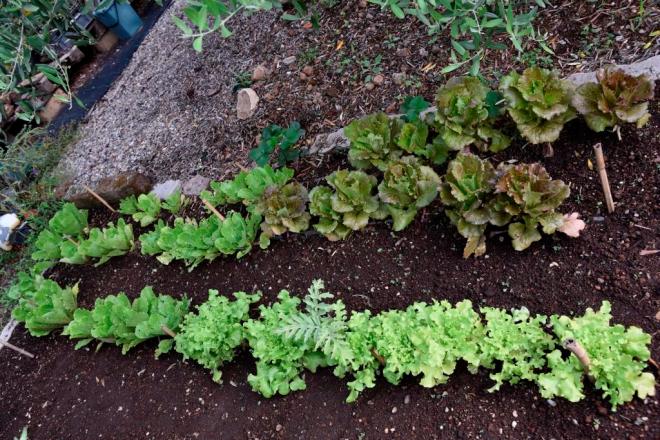 Lettuces and Chinese lettuce, this bed has been weeded too 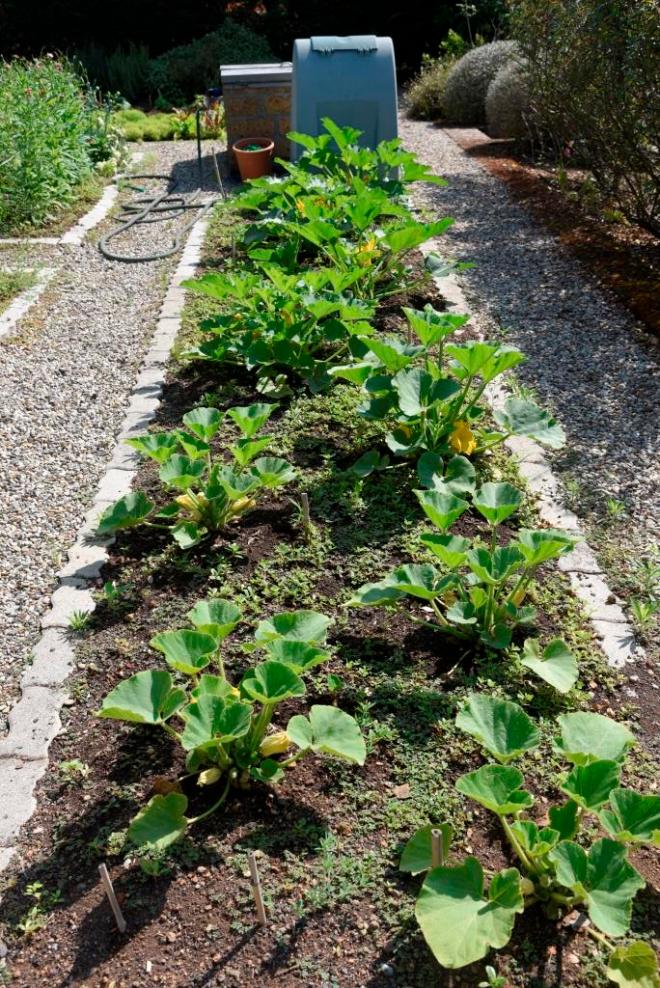 Courgette and small squash bed weeded and mulched, much better

Courgettes started giving at least one courgette per plant each day for the last week, I pick them very small so I can use them all; any that escape my attention and become a little larger, I slice very thinly with a vegetable peeler and use raw as a salad.

Look how much they’ve grown in just a few days!

The squash also have small fruits, I often use these as roasted vegetables as soon as they’re about half ripe

The aubergines planted a couple of days later when it wasn’t so hot are fine, this is the bed where the peas and broad beans were up until the beginning of the week

Some of the aubergines had to wait in the greenhouse before being planted as the peas and broad beans needed to be removed first.  Leaving them in the shaded greenhouse was a mistake; the day I planted them out was very hot, I should have waited until much later in the day as some of their leaves have ‘sun burn’ – I don’t know what else you’d call it!  I’m sure they’ll recover.

The warm very weather suits the peppers, several have small peppers already but it will be a while before they are large enough or red or yellow enough to harvest.

Just behind the corn in the above photograph there is  a pot with beetroot, I picked the first ones the other day and they were delicious, I must sow some more and actually try to have some growing during the winter too, in the greenhouse.

Tomatoes are forming and the fruit swelling 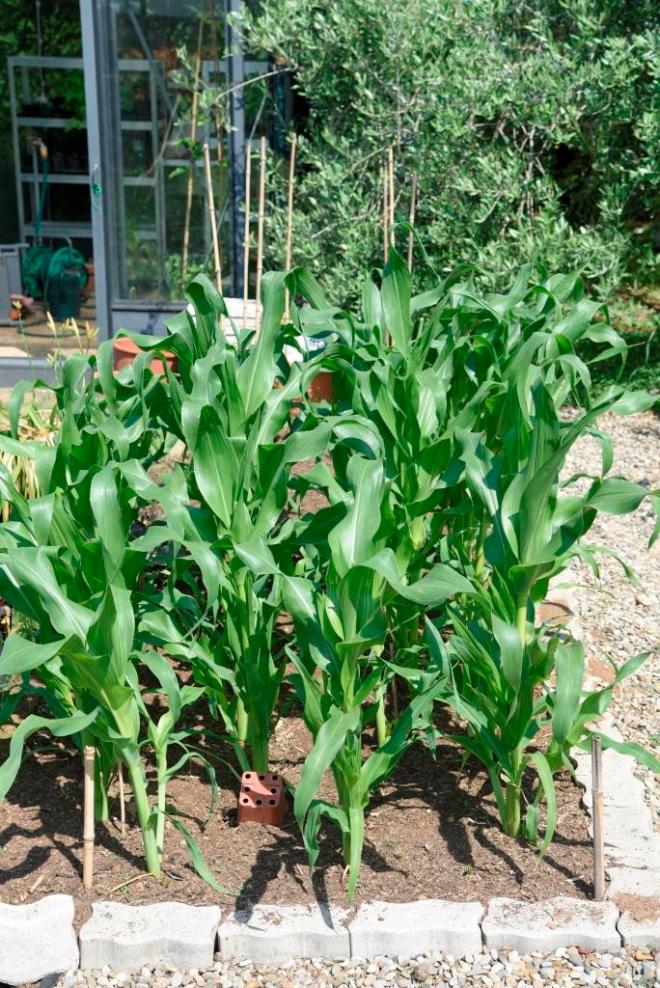 The greenhouse is almost empty now, just the Lemon grass and Passion fruit planted into the border and some tomatoes sown long after the others that are supposed to be the type that will stay on the vine and be edible into the New Year; I haven’t ever tried these before, so we will see.

I’m also regularly picking strawberries, eaten before I could take any photographs and Mulberries, there are masses this year.  Has anyone ever made jam with them, I’d love your recipe!

What are you picking to eat from your garden this week?

Have a great weekend and I hope it stays fine for you.

32 thoughts on “The Vegetable Garden in June”