The cuttings beds are continuing to give me so much pleasure.  Being able to pick flowers for a vase whenever I want is just incredible.  There has been so many of some flowers that I am now more able to calculate how many plants I need to plant to have ‘enough’.

I decided to read last month’s post to help me remember where things were a month ago – I am astonished to realise how much the sunflowers have grown in just four weeks, they are nearly to the top of the canes and two have been flowering for almost a week.

The sun flowers are almost as tall as the Trachelospunum hedge

I must pick these, tomorrow you might see them in a vase

These are a rather lovely strong yellow

The wallflowers finished flowering and as I needed the space and they weren’t as scented as I’d hoped I removed them and planted out some dianthus and Zinnias.  I think I may try some more Zinnia seed a little later too, with the hope they will continue to flower well into autumn. 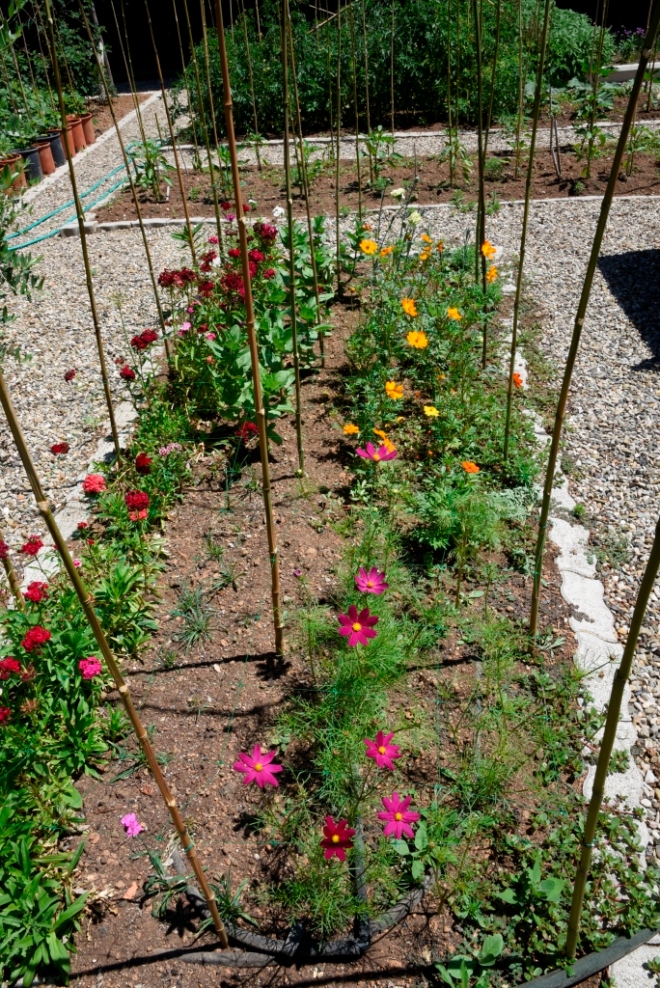 I don’t know if the orange Cosmos will grow taller, I do hope so as they would be more useful in a taller vase.

Bells of Ireland are flowering but are very short; having never grown them before I don’t know if they will continue to flower or this is ‘it’!

The Bells of Ireland are no more than a foot high I was expecting more like a metre.  Sorry about the mixed feet and metres!

I’m really pleased with the amount of flowers the larkspur have produced, they are a lovely deep blue and I like them combined with a lot of other colours as well as on their own so I’ll try to grow about the same number of these next year (or rather I’ll sow more in September).  The autumn grown seeds have grown much more strongly than those I sowed in February.  I think they can also be planted quite close together which is useful to remember.

To the left of the Larkspur I cut all the Ami majus hard back, hoping they would grow again to produce more flowers; I’m not sure they will as they are being overtaken by the all the cosmos seedlings growing from the seed that fell there last year, I didn’t pick them enough!  Interestingly they are much stronger plants than those I sowed this year, but they aren’t flowering quite yet and hopefully the new plants will grow stronger as time passes. 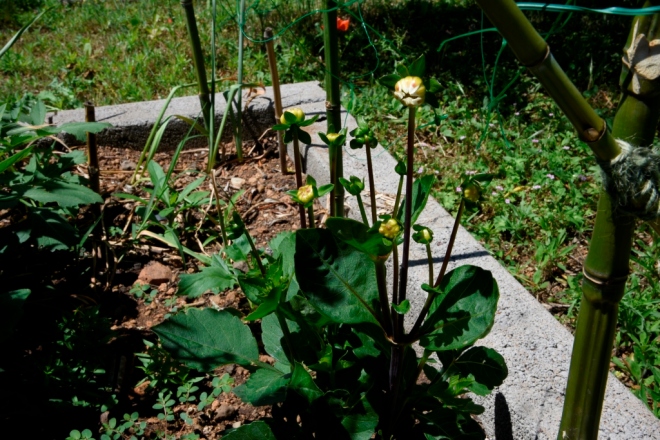 One of the Dahlias has buds, an astonishingly short time after planting it 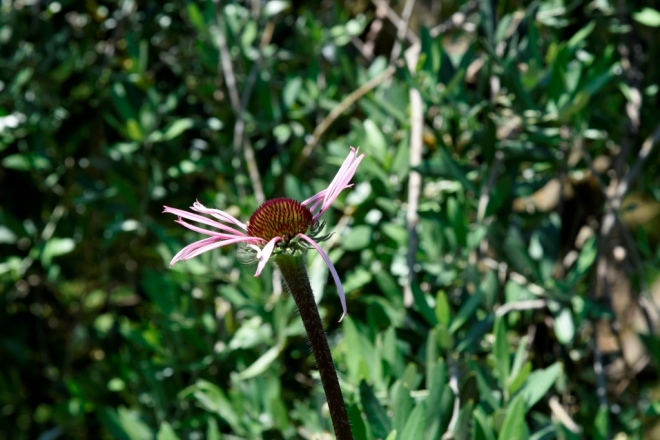 The Echinacea I grew from seed two years ago and planted out last year is producing flowers for the fist time, the stems are incredibly long

Knautia seem to have taken over the end of the bed, the small plants I moved there last year from another part of the garden where they struggled to survive and certainly didn’t manage to make any impact at all have now formed a large patch and are flowering profusely I think I will give them the equivalent of the Chelsea chop before I go away so that they will continue to produce flowers right through until the frosts in late autumn.

More Dahlias are growing to the left of the Knautia.  I planted all white this year in a variety of sizes and forms.

One thing I have definitely learned is that you can’t have too many white flowers; it adds light to any arrangement and is fabulous with blue, elegant on its own and combines with almost every other colour to intensify their colours.

Thank you Julie at Peonies and Posies for prompting this post, it is so useful to be able to check back to see what flowers when and other information one always thinks will be easy to remember but never is.  Do visit her post to see her wonderful Cuttings Garden and others’ more modest but equally fascinating cut flower patches.

34 thoughts on “The Cuttings Garden at the end of May”